Continued from It's just a jump to the left...

"Oof!"  I said.  Which was qute restrained really considering that a sizeable house had landed on me.
After some wriggling and a lot of splinters, I managed to free my right arm from broken joists, floorboards and the like, and reach up under Hat's brim and into its hammerspace.  On only the seventeenth attempt, I felt the sturdy handle of a drill in my grip and - wasting no time - switched it on while driving it upwards. 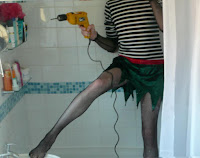 After what felt like hours - but was probably only six years - hot, sticky, covered in sawdust and grit, I burst through the bottom of a bathtub.
Reality dawned...
"Oh, no" I said to no one in particular as I clocked what I was wearing and realised what what was transpiring.  "No.  I'm sorry.  No.  This cannot happen.  I don't want this."
STAND BY FOR INSERTION INTO STORYLINE the disembodied voice of the enchanted mirror intoned.

What mirror?  Where did it come from?
"I don't kn-"
STAND BY...
"What?  No.  I'm sorry, no.  I'm not having it.  We can do better than this."
STAND BY...
I couldn't believe the bloody mirror, or whatever it was, wasn't listening to me.  Me!  A witch!  There was only one thing for it.  I had to bamboozle it.  A spell came to mind, so I vomited it out of my mouth before it bamboozled me, too.
"The fact is" I said, quoting Nana Rampton's Discombobulator "this is about identifying what we do most of best, and finding fewer ways of doing more of it less."
...?  The mirror managed to convey an uncomfortable silence before clicking and whirring rather disconcertingly.  REINITIALISING it finally declared.
"At last" I muttered.
"G'day, DeVice!  We're good to go" the mirror said in a non-bogan Aussie accent.
"What?"
"Don't say what, say pardon" the mirror said, this time attempting a middle class English accent that would take offence at being told one's gravy needed sieving, but failing to completely mask the Aussieness.  I narrowed my eyes as comprehension dawned.
"T-Bird?  Is that you?"
"None other" the one-time teeterer atop the Hag Pillar confirmed amidst more whirring, clicking background noise.  She'd dropped the posh Home Counties accent, thankfully.  "OK, mate.  We're pretty much good to go.  Again."

What?!  We're accepting cameos from the Days of Coven Past now?
Just go with it, or this will take even longer.  The end is already beyond our second and third sight, and the crystal ball's given up trying to extrapolate where and when this "adventure" will end up.
Yes, but, Miss Smuggersham?  T-Bird?!  We haven't seen her in years!
I don't see why not?  She was a major player back in the day.  Besides, Beast turns up here later.
WHAT?!?
REINITIALISATION COMPLETE.  STORY CHANGE IN THREE...

"Right" said T-Bird, leaving the mirror to get on with the technical stuff.  "Now to see how Tim's getting on in those Big Bang Pants!"
TWO...
"Sexily, I'll bet!" I said not even bothering to hide the lasciviousness.
ONE...
"Rawr!"


Hang on.  This isn't going to involve more time travel is it?  You know I'm not thrilled abou-


And so it begins

Although, actually, before that...

Or is it after?
See?!  This is why I'm less than thrilled about time travel.

PLEASE REMAIN IN YOUR ASSIGNED HOLDING PATTERN POSITION a disembodied voice intoned as Ms Scarlet attempted to change course aboard her octopus sucker bath-mat.
"Wot?  I mean, what?  I mean, pardon?  Who keeps saying that?" she asked, her frown turning into a scowl.  "Look.  I don't even want to be here.  I've got half an alphabet left to gild" she exaggerated wildly.
PLEASE REMAIN IN YOUR ASSIGNED HOLDING PATTERN POSITION.  STORY CHANGE WAVE-FRONT APPROACHING
"Oh, crumbs."  From the East, off to starboard, a purpley-pink band of cloud was approaching.  Fast.  "I hope I'm wearing clean knickers...?"
"Woof!" Sid agreed.

"Oh!"  Ms Scarlet cried as the wave-front hit them, rocking the bath-mat violently before receding into the West.  "I hope that didn't ruin my hair?  We should have turned into the wave."
"Woof!"
"Wait a minute... What are we stuck to?  And are we fallin-" 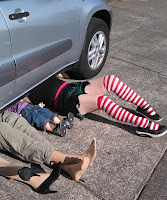 "Oh, cripes.  Sid?  I think we've landed on someone" Ms Scarlet said as she peered over the edge of her bath-mat and down the side of the car that it had got stuck to during the story change.  "I see stripy tights.  I hope it's not Ms Mistress as she won't be very pleased..."
Sid cocked his head to one side and wagged his tail.
Leaning over a bit further, revealed not only that the tights were, in fact, stockings, but also a tantalising bit of thigh and the Freakin' Green Elf Shorts!
"Oh, thank gods!" Ms Scarlet beamed from ear to ear.  "It's not Ms Mistress - it's only someone else."
Sid suddenly barked a warning, causing Ms Scarlet to jump which led to her losing her balance and sliding down the windscreen and bonnet (hood, for the Americans), and on to the ground.  "Oof!" she exclaimed.
"Someone's knobbled the Wicked Witch of the East!" a voice yelled from the approaching crowd that had got Sid's attention, and seemed to consist of small, orange skinned, green haired versions of Savannah and her family, and Cookie and his neighbourhood.  However, upon second glance, they weren't actually small, but shuffling around on their knees in a bid to appear small.
"She's dead?  The wicked witch is dead?"
"Ding, dong, the witch is dead!"
"Oh, dear, Sid" whispered Ms Scarlet, hidden from sight at the front of the car.  "I think we'd better call for help?"  So she took out her phone but was dismayed to find out there was no signal.  And no Wi-Fi, either!

Meanwhile, under the car, Alpo Jones was rapidly losing patience.
"I'm not a witch" she said, "and I'm certainly not dead.  Only lightly squashed, I think?"  However, no one heard her over the sound of their own griping and complaining about their knees and how hot they all were.
"Yes, she's quite, quite dead" declared the perspiring town coroner, Rimpy Rimpington as he dabbed at the orange make-up trickling down his temples.
"Are you sure?" said Cookie as he noticed Alpo kicking her legs in an effort to free herself.  "Fuck.  My knees are killing me!"
"Quite sure.  Those are just death spasms - the nerves and suchlike firing off their final commands before full-on death sets in."
"I don't know?" Savvy joined in as she looked up from rubbing her own sore knees.  "I think she's trying to say something?  Christ this wig is fucking hot!"
"I'm not dead!" Alpo almost shouted, although it was quite muffled from her being under the car.  "I'm getting better!"
"Just gas escaping" Rimpy soothed, trying to ignore Savvy as she adjusted her big, green wig.  "She's sincerely dead.  Why don't we all step back an-"

Rimpy tailed off as a large, irridescent bubble floated down before them.  It popped as it reached the ground, and a vision in pale lilac taffeta appeared!
"Bugger!" muttered the vision, as she wobbled on her feet slightly and grabbed the side of the car to steady herself.  "Bloody bubbles are sods for travelling in.  Aaaaargh!"
The sudden appearance of Ms Scarlet from behind the car startled not only the taffeta enrobed vision, but also Rimpy and the rest of the crowd who all gasped in unison and took a few awkward knee-steps back.
"Woof!" said Sid.
"Dinah!" Ms Scarlet cried waving her phone in the lilac-clad newcomer's face.  "Thank goodness you're here!  I've been involved in this terrible accident, I've got no signal, and I need to get home to commission a set of coins with my face on them!"
"I thought you weren't speaking to me because of the 'no Shags' comment?" Dinahmow said.
"What?  Oh, I haven't got time for that now.  Can I borrow your phone, please?"
"I don't have a phone, only this wand and- Aaaaargh!"
"Aaaiiiieee!! What is it?!" Ms Scarlet screamed.
"Woof!" Sid seconded.
Dinah clutched her chest as she tried to calm her breathing after catching sight of the Freakin' Green Elf Shorts hugging Alpo Jones' thighs.  "Oh, er...  Nothing.  Er..." she said.  "I, er, just remembered my socks don't match my frock.  Um."
Ms Scarlet glared at her, heart pounding in slowly fading panic.  "Right" she said, unconvinced.  "So, do you, perhaps, have a map so I can find my way out of here, then?"
"A map?" Dinah shook her head.  "No.  But follow the Yellow Brick Road to Mogwa-, um, I mean, the Viridian Village, and there you will find an I.T. Wizard who might help you get your phone working again."
"Oh.  Well, thank you, anyway."
"Wait!" Dinah stooped and, having transmogrified her wand into a magical pair of pincers, used them to pull the Freakin' Green Elf Shorts off Alpo Jones.  "You'll need these magic emerald elf shorts.  For, umm... protection" she lied, finding a way to rid this place of the detestable 'Shorts.
With all eyes now on Dinah and Ms Scarlet, Rimpy got to his feet, ignoring his creaking knees and pulled Alpo Jones out from under the car.  "Let's get out of here" he whispered.  And they quietly got into the car.
Ms Scarlet eyed the Yellow Brick Road dejectedly as it curled and weaved away into the distance.  It looked like the Viridian Village was some way off.  Then she had an idea.
"I know!  I can use the car to drive to the Viridian-" she stopped and sighed as the car roared away.

Hanging around at the back of the crowd of badly made-up Oompa-Loompas, but in front of the glass box containing two droids that had recently appeared, three non-kneeling - and, therefore, rather taller - figures talked amongst themselves.
"Well, here we are again" Beast sighed.
"Ja" agreed Mago, somewhat glumly.
"Why are you wearing a tin foil hat with tea-lights on it, Mago?"
"Becaussse, you bumbling buffoon, Beasssst" hissed The Very Mistress, "he'sss the Tin Foil Hatted Man.  Isssn't it obvioussss?"
Beast cringed and nodded.
"Mistress?" Mago began, eyeing a curl of black smoke emerging from thin air in proximity to Ms Scarlet and Dinah, "If I'm the Tin Foil Hatted Man, und Beast is clearly the Cowardly Codswallop, why aren't you either squashed under that car, or appearing from that puff of smoke over there?"
"Hmmm..." The Very Mistress pondered, narrowing her eyes at the smoke.  "Why, indeed?"

Posted by Inexplicable DeVice at 14:19