Hello and welcome to the 2017 Tin Foil Hat Gallery, the fourth such exhibit seen over the years in this little corner of Blogland. This being the fourth collection of international chapeaux de tin foil, it seemed fitting that the theme also be "four". How you, the designers, interpreted the theme was entirely at your own discretion, and I'm very pleased with the diversity and alternative takes that made it into the collection.
An added extra to the theme, that of the rubber duck, came about via one of the SubConsciouses. I can't remember which one...

Hey! It was me!
Oh, yes. The Host's SubC. I might have known you'd be responsible for such an act of triviality!

Actually, it wasn't trivial. The rubber duck, in thought and form,
has been a part of this competition since the very first one back in 2010
(scroll down to the text below LẌ's [then known as xl] masterpiece for the reference).
I'd hardly call that a rubber duck of any substance!
And then, in the second collection in 2014, Tin Hat and Tales: Flights of Fancy,
Mago wowed us all with his creation: The Duck!
Fine! So the rubber duck theme didn't come out of nowhere, then. Hmmph...

(Thank gods Witchface gave up then, as I couldn't find a reference to rubber ducks
in 2015's 10th Anniversary Tin Foil Top Hats and Tiaras collection...)
What was that?!

[silence]
Hmmmm... Right, then. We'd better open the doors to the gallery and let you all peruse the 2017 Tin Foil Hat Collection: Tin-Four, Rubber Duck!


As with previous year's galleries, please make your way around the collection and cast your discerning eye (or eyes, if you're not a Cylon) over these exquisite exhibits, and let us know in the comments, or by email (if you wish your vote to remain anonymous), upon whom you would bestow the winners' crown (made of tin foil, of course).
Once voting is complete, should the result be a draw, then I will have the deciding vote, much like Head Judge Len Goodman on Strictly Come Dancing (although, not in the upcoming series as he's bloody well left!). 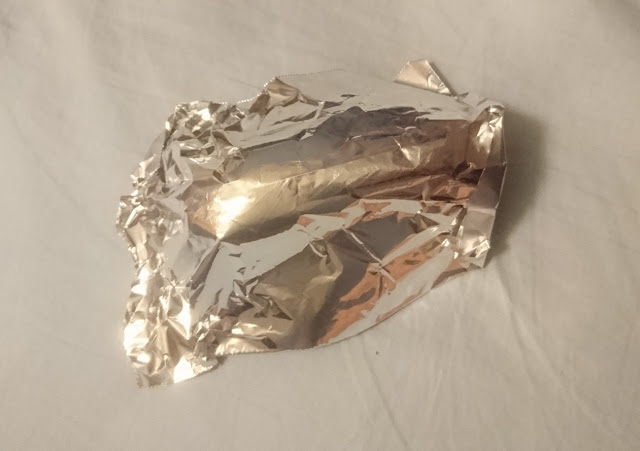 Coming at the theme sideways, Hound underwent considerable "pain and irritation" again (because he really enjoyed it last year, no matter what he may say to the contrary) to bring this revealing number to the fore... 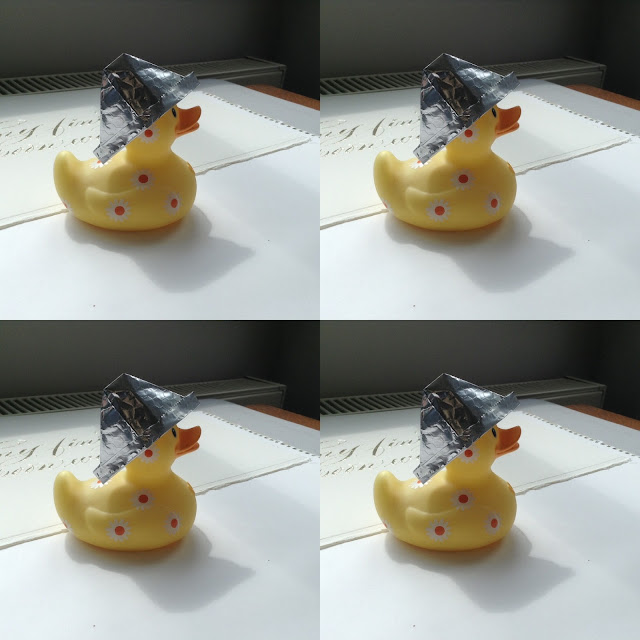 "Charmaine, what is it I have to do for Mr Devine?? Was it something to do with rubber gloves and a goose?? And I have to do it four times??!! Goodness me, but his competitions get more complicated each year. CHARMAINE, are you listening??? If I have to do something with a goose then I will need an extra roll of tin foil..... CHARMAINE, could you pop to the shops???"

"Don't worry Aunt Scarlet, I've done it. In between being an International peacekeeper and doing the dusting I've cobbled something together. It's called: Tin Foil Hat Competition with rubber duck by Andy Warhol. Mr Devine will love it!!"

LẌ:
Ducks In A Row

"Anxiously awaiting the Great Eclipse of 21 August 2017 with protective gear in place." 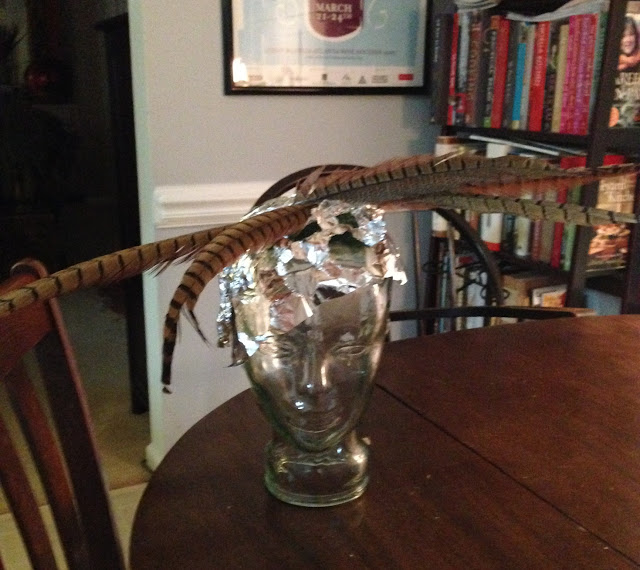 "This was supposed to be a fascinator with a veil, but foil is very very difficult to fine cut!! My R&D and actual attempt totally failed me!!" 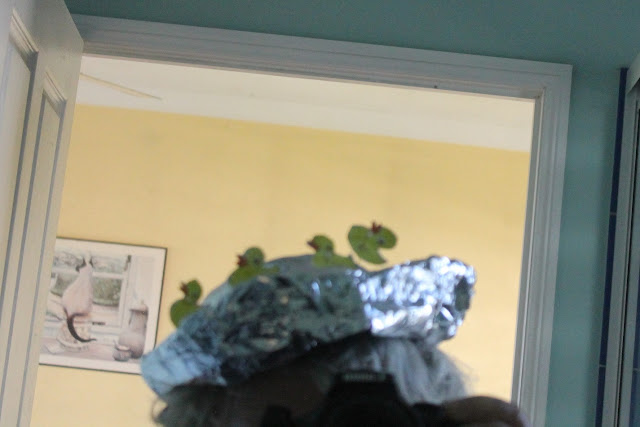 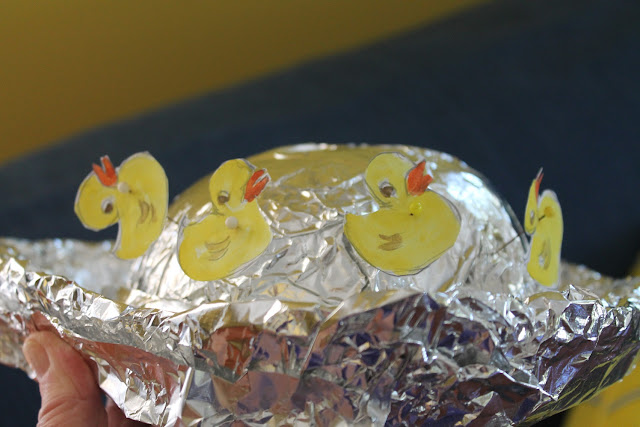 "Only crappy photos as I am rubbish at selfies*. Also, the wind was whipping the tin foil off and the bloody ducks were twirling about like those windmill things we used to get at fun-fairs."

* Don't worry Dinah, the "rubbish selfie" could have been part of this year's theme as the next two entries show...

Mago:
There Are Four Lights!** Tea with Attila-The-Hun***
Darling - I set my head on fire for You ! 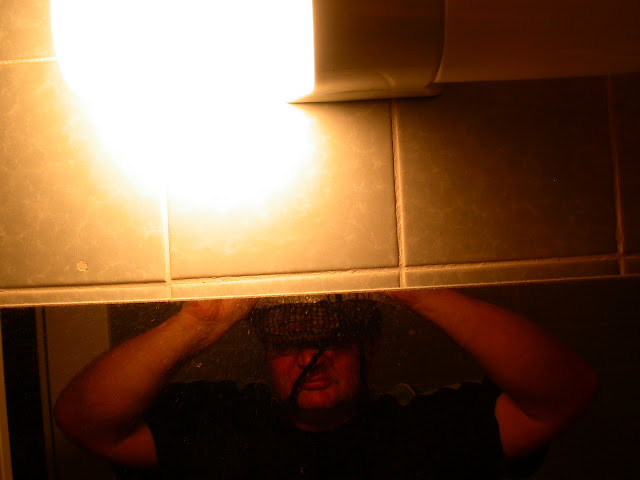 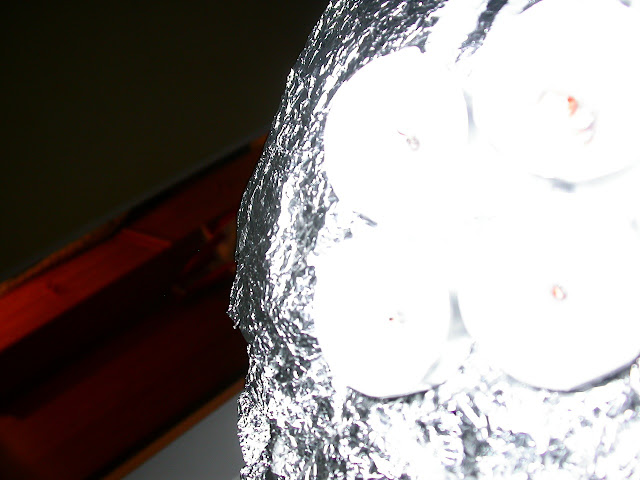 Mago scraped in just past the deadline, but I was looking the other way at the time, so I had to allow it. Anyway, this is his excuse Tin Foil Hat:

"As it is, shit happens. Like when you know that there is this old kitchen table, and in its drawer is always a roll of tinfoil, but this time it is not. There is a roll of paper bags, of fridge bags (those that one uses for freezing things) - but no tin foil.
"So one makes it with what is at hands. In this case it is the tin foil of the old entry from last year (?), or so, well, a measured amount of foil anyway.
"Rummaging through the drawer produces four (!) tealights, a bit crumbled and worn, but nevertheless, four tealights.
"This must be an omen.
"I rest my case & here we go."

"Picture one shows me doing my best Attila-The-Hun impersonification wearing the four lights shown in picture two.
"Darling - I set my head on fire for You !"

** Mago didn't name his hat, but with his four lights I couldn't help but think of Star Trek.
*** Can you imagine having afternoon tea with Attila the Hun?  I think we'd run out of napkins pretty quickly...

and mine:
Punk Witch 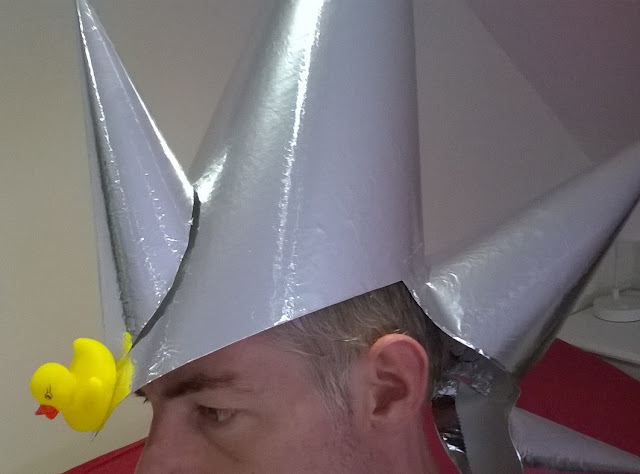 Oof!  The bloody hat is too big to fit in the frame - even with the Host's freakishly long arms fully extended!  Stupid selfies... 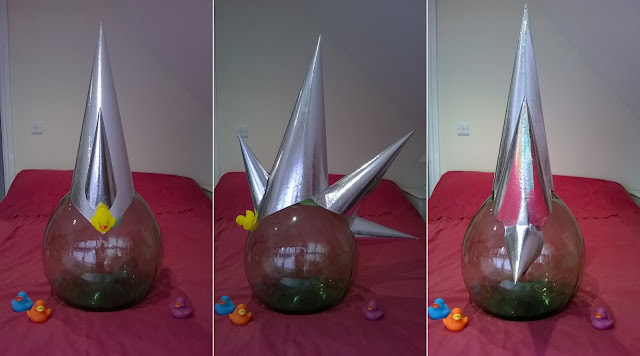 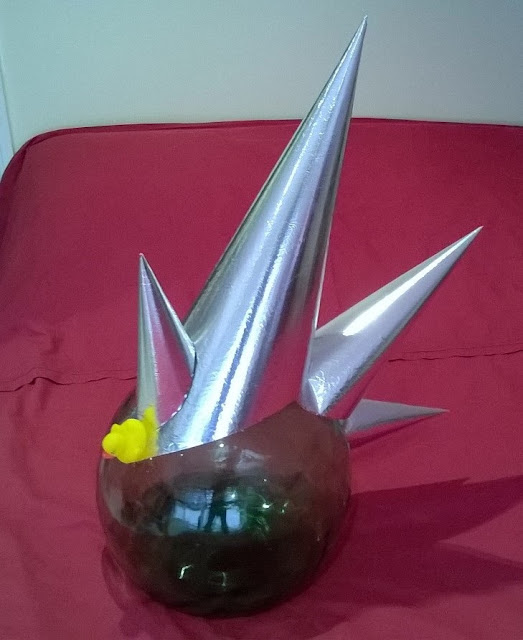 Now that you've made your way around the gallery, please show your appreciation by voting for your favourite Tin Foil Hat (with or without rubber duck/s). You have until midnight on Thursday 31st August to cast your votes, either in the comments or by emailing me (if you wish your vote to be anonymous). I shall then announce the winner on Friday 1st September.****

Finally: A huge thank you to all the artistes who managed to find time in their busy schedules to design, construct, and submit their tin foil creations for this year's collection. Without you, I would have had to resort to making several hats and pretending that each one was made by a sudden new blogger (whose profiles and blogs I would also have to make up), and I think you all know that I'm far too lazy to go to all that palaver!


**** Yes, OK, I did previously give a slightly longer voting window, but, quite frankly, I can't be bothered to wait that extra day!


Posted by Inexplicable DeVice at 17:15