Continued from... The Pink Carriage of No Horse Drawn

Goading each other on, and sniggering over smutty innuendos, two flying monkeys swooped down towards a fast-moving, pink car...

A little while later back at Castle DeVice... 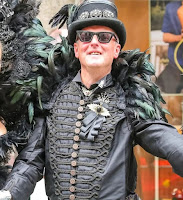 "What in the Christing Hells is this?!"
Before me, my highest ranking flying monkeys, Head Gardener Nikko Jon, and Head Fancier Chistery Maddie, presented a radio-controlled, miniature FAB 1, complete with little puppet passengers inside.
"You don't want it?"
"Is this not what you asked for?"
One of them sniggered amongst a ruffling of feathers.
"Look at it!" I screeched.  "They're bloody puppets!"
"Marionettes, actually" Jon said.
"Aaaaaaaarrrrrgh!" 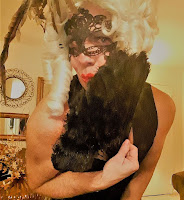 "This is what you showed us in the crystal ball, Tootes" said Maddie.
"Yes.  It's not our fault you hadn't put your reading glasses on."
"You showed us a small, radio-controlled car.  How were we supposed to know you wanted the real thing?"
Someone sniggered again, this time without bothering to mask it with a wing shake.
"Christ!  Would you give me just a small break?  Why in all Hells would I want you to fetch me a toy car?" I hissed while pinching the bridge of my nose, which - to be fair - was bereft of reading glasses.  "You wouldn't be like this to The Very Mistress, would you?"
The two flying monkeys gave each other smirking 'looks'.
"I might" said Jon
"Yeah, me too" Maddie agreed.

"Really?" I countered, a plan forming.  I affected my best stern Very Mistress pose and pulled out my crystal ball complete with a fully formed image of The Very Mistress herself.  Without make-up!
"Aaiieeee!!!"
"Eeeeeeeeeeek!!!"
They both screamed like Ned Flanders and flew away in a flurry of feathers.
"How does she do it?"  I muttered, willing my blood pressure to drop. "How does the Very Mistress put up with such nincompoopery?  I need a gin.
"Or twelve."

Speeding down the Yellow Brick Road at velocities not previously seen in Oz, the occupants of the full-size FAB 1 filled its spacious cabin with laughter and the occasional bark.
"See?" Ms Scarlet almost crowed.  "I told you.  One doesn't get a place in the Coven unless one is a witch of some repute."  Then she glanced at Beast and wondered how he had managed to get in, before allowing a small shudder of horror to pass through her body.
"That'll teach the ssskinny little upssstart" the Very Mistress gloated, throwing her head back as she cackled.  A hideous screech like an amplified fingernail-scrape-down-a-blackboard filled FAB 1's cabin as her bony old crest scraped against the domed glass.
"'ere!" Mitzi started before she remembered herself and switched to Received Pronunciation.  "I mean, do watch the bodywork.".
"Ssssorry" the Very Mistress grinned, drooling a distressingly viscous liquid into the luxuriously carpetted footwell.
"And the carpet!"
Ms Scarlet drew her feet up and pulled a face.  "Does anyone have a wet-wipe?  And some Febreze?"
"Woof!"

FAB 1 pulled up outside the gates of the Viridian Village in an impressive spray of small stones as - having had the brakes applied rather too late - its six wide tyres flung gravel in a wide arc.  Mago and Beast got out first, with the latter falling to his knees and kissing the ground.
"Oh, thank gods we're here!" he exclaimed.  "We made it in one piece."
"Ja" Mago agreed, his knuckles still white from gripping the grab handles.  "Also, we might as well have saved our nerves and just joined the story here, as I haven't had a line in six pages!"
"At least you're getting them", Beast moaned.  "I had a whole story to myself once and didn't get to utter a single word!"
"Hmm?" Mago asked, having not really paid attention.
"Nothing..." Beast sighed.
"What are you ninniesss going on about?" the Very Mistress said as she - surprisingly gracefully, and without showing even a hint of snatch - manoeuvred herself out of the car.
"Oh, don't bother about them" Ms Scarlet trilled as she got out the other side and headed towards the gates.  Sid scurried around at her feet, in what looked like an effort to trip her up...

A little door popped open in the gates at about head-height as Ms Scarlet and her party approached.  A vaguely canine male face appeared, watching them intently.  It didn't say anything, but upon spying the Freakin' Green Elf Shorts, it began moving very slightly back and forth in a definite rhythm.
"Um" began Mago.  "Can we come in, bitte?"
The face flicked its gaze, briefly, over Mago's tin foil hat, then returned its attention to Ms Scarlet's FGES clad nether regions.
"Perhapsss you should talk to it?" the Very Mistress said poking Ms Scarlet with a wizened crone-finger.  "It sssseemsss to like you." 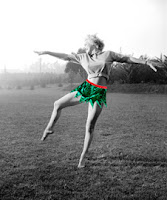 Ms Scarlet shrugged and pranced up to the gate, the tiny bells on the FGES jingling.  The face seemed to light up - a faint smile appeared and the eyes widened somewhat.  But rather more noticeably, the rocking intensified.
"Can we come in?  Please?"
"Woof!" said Sid.
The face moved back slightly and a hand emerged from the little door.  The index finger extended then beckoned Ms Scarlet closer.  Hesitantly, she stepped forward.
"Can I touch your velvety shorts?" the face said with a trace of Brummie accent.  Ms Scarlet turned to the others with a look of alarm on her face.
"Go on!"  Beast urged with a grin.  He could see where this was going.  Mago and the Very Mistress shooed Ms Scarlet on, too.  If they knew, they weren't showing it.
Ms Scarlet stepped up to the gate.  The hand shot out and fingered the green velour and the irritating, dangling bells, the rocking now quite violent and interspersed with low grunts.
"How long must I-" Ms Scarlet began, but was cut off by a sudden "Unnf!" from the face, and then all movement ceased.  Beast looked to be beside himself in mirth.
"Uh.  Oh, that's the stuff" the face said, seemingly to itself.  Then, looking out at the small group, it appeared to draw itself up and a look of imperiousness settled in.  "I am the Guard Dog of the Gates!  What do you want?"

Posted by Inexplicable DeVice at 12:27