I was looking through my draft posts (22 of them!) to see if I had something almost finished that I could "touch up" and post, so to speak, when I came across (not literally) this one from almost a year ago:

We have a new cleaner at work.  He is young and attractive.

26.04.2018 - After the most languorous yet insouciant display of vacuuming I have ever seen, followed by a nod 'hello', the new cleaner slowly and deliberately coiled up his vacuum cleaner cable while facing half-away from me.  The level of arrogant nonchalance with which he managed to instill in this simple action was quite remarkable. And hypnotic.  His muscles are quite impressive.


27.04.2018 - The muscular young cleaning youth did it again.  I think he may be on to me, though, as this time he deliberately faced me as I was sitting at my desk.  Having completed another seemingly languid and indolent pass of the horrid carpet tiles, he almost casually coiled that cable again, unnecessarily flexing his biceps and bouncing his pecs in my direction.  I didn't know where to look!  Well, I did, clearly...
To make things worse, he actually smiled at me a couple of times.  Not while doing his "routine", but in passing as he moved down the office.

04.05.2018 - I saw him again this morning.  Only fleetingly, however.  He had just finished flexing and bulging his way through coiling that cable again as I arrived in the office, then he drifted off down the office and into the next wing.

11.05.2018 - He came and vacuumed around my desk, totally flummoxing me.  He even spoke (just mildly flirtatious smalltalk).  He has an indeterminate accent - I think he's Eastern European?  Or American...
Anyway, he doesn't look quite so huge and imposing close up, but still pretty awesome, though!

Now.  If you'll excuse me.  I need an early night if I'm to be in work early again tomorrow!

~ wobbly flashback wobbles out of existence ~

I'm not sure exactly why I didn't finish it off?  Possibly because I was hoping to get a photo of him to illustrate the post, or that I'd actually speak to him some more and get to know him a bit?  However, I didn't see him again.  I don't know what happened to him.  Moved on to a different cleaning contract, perhaps?  Or fired for being (or appearing) lazy and/or flirtatious?  Snapped up by a modelling agency?  Or whisked away by his Henry after it came to life and fell in love with him...?

Anyway, while we're here and on this topic, here's a little (or big rather, as he's 6'3" apparently) something I discovered recently: Carl Logan Ponder* aka loponder7 (on Instagram) 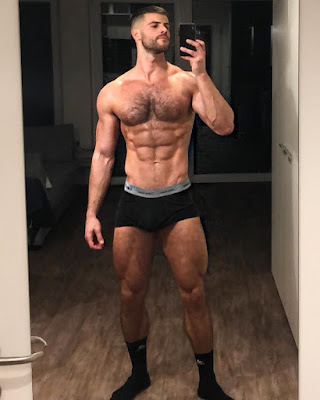 He likes animals, and they seem to like him 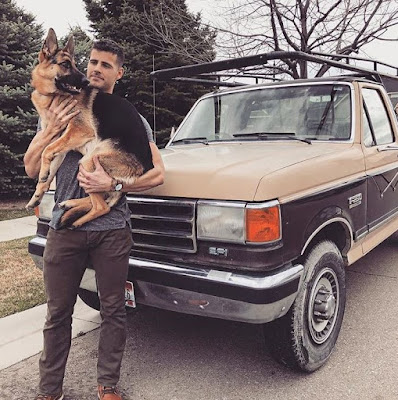 He doesn't mind getting wet

He has musical talents

Good with kids and can rock a 'tache!

* At least, I think that's his name.  Other than his Instagram account, there seems to be precious little about him on the interwebs (plus, I can't be bothered to stalk much these days - all I got is that he's 27 (born mid-November 1991).


Posted by Inexplicable DeVice at 00:00

Labels: Crush, I We Me Us, Manual Labour, Mood Swings, Time Displacement