Wherever I'd ended up, pink tweed upholstery fabric was masquerading as the latest thing in twinset fabrics. Hornrim glasses seem to be de rigeur, too. I adjusted mine and walked down the path and away from the garishly coloured house, noting as I did so that the bushes could do with a trim.

As I approached what I assumed to be my car, a pale yellow sedan of some description - American, judging by its sheer size - I noticed a creepy old house on the hill at the end of the cul de sac.

Once in the car, I drove through the dilapidated gates and up the winding driveway to the looming old mansion.

Clutching my pearls in one hand and my huge makeup bag in the other, I gracefully got out of my sedan - keeping my legs together, naturally, not wanting to cause a Li-Lo-style scene. I approached the mansion and, noticing that it was ajar, pushed open the massive wooden front door.

"Ding dong! Evil- I mean, Avon calling!" I called through the cavernous entrance hall. Stepping over the threshold and into the wide open space, I called again. "Helloooo? Is there anybody home?"

After a few seconds and no response, I made my way up the curving stone steps. "Helloooo?" I called again on the landing. Noticing another, smaller, flight of stairs, I ascended them and emerged into what must have been the attic, only half of it was open to the elements seeing as part of the roof had collapsed. "Hello?"

Glancing around, I saw what looked like a bed in a large, unused fireplace. Strewn around it were comics graphic novels, air-fix kit starships and what looked suspiciously like unwashed, crispy Big Bang pants! And to top it all off, a faded poster of Autumn Reeser inexpertly stuck to the chimney-back.

This could mean only one thing!

Peering around in the gloom, I noticed a dark shadow under the eaves. "Hello. I won't hurt you" I called encouragingly. "Come on out. I'm just your neighbourhood Avon representative."

And from the darkness he shuffled: 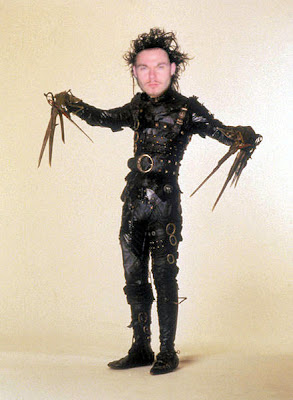 "Oh..." I gasped. He is Hot! Even in all that leather bondage gear. An evil thought popped into my head. "Well, hello" I smiled at him. "I'm Peg, your Avon represen- Oh! You've got something on you. Just there" and I pointed at Tim's shoulder.

He looked confused then raised his arm, finger-blades scissoring

"Oh, half of it's fallen to your thigh."


"Oh no!" I exclaimed with an evil grin. "Your clothes have fallen off!"

Posted by Inexplicable DeVice at 06:13