"He'll propagate, Clyde. He will increase his number."*


I heard something very disturbing this morning while taking my bath.

Through the open window, I heard the distinctive 'strangled' low song of a male blackbird attempting to attract a mate.

As I lay amongst the bubbles, luxuriating in the heat and heady scent of jasmine and fig extracts, a thought popped into my mind, barging aside all others:

I remembered the thought of being watched yesterday as I did some gardening. I'd seen a female blackbird hopping around underneath the cherry tree, but paid her little heed. It seems I shouldn't have been so complacent. Beaky was probably perched somewhere, glaring at me like a velociraptor eyeing its prey from a hidden vantage point.

After my bath, I retired to the back room, off my bedroom. As I sat at my desk, gazing out of the window, Beaky flew down and alighted on the gable end above the bathroom. He turned enough so that one evil eye was fixed upon me. Smirking - as much as one can with a beak - he lifted his tail and shat on the tiles before swooping off low over the garden. Little bastard!

Then, a bit later on, I was in the garden poking, pruning and purveying, when the evil little monster, bold as brass, soared over next door's fence and landed in the bird bath where he proceeded to primp and preen, readying himself for courtship no doubt! 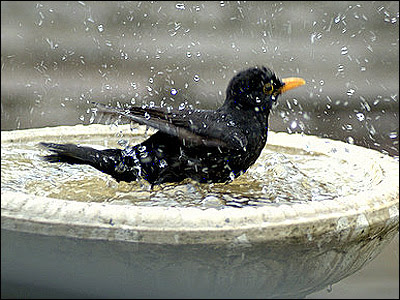 If he thinks he's raising his monstrous progeny in my garden, he's got another thing coming!


* Snaps to whoever knows (or guesses) who said this, and from which film it was taken.

Posted by Inexplicable DeVice at 18:25

Labels: Beaky, Familiar, I We Me Us