It's A Faaaake! Not The Art Of Star Trek - Let's See Your OC!


This month's Star Trek Art Challenge-
Aaaand you've lost most of our audience.

Can you even call less than a dozen people an "audience"?
Who knows?
Quiet, you lot!  If anything, the audience would have been lost before I started writing anything because the title's got a ruddy big "Star Trek" in it!
Oh, get on with it then.  I cant be bothered with this malarkey - I've got apples to poison and fingers to prick.
Well, shut up and go then!
Hmmmph!
Right.  For anyone who is still even the slightest bit interested, November's Art Challenge is all about one's original character (OC):

Invent your very own original Star Trek character and present it in whatever way you wish.

Maybe you make up a little backstory for your character. Where does your OC live in the Star Trek universe? How does it look? Maybe draw a traditional character sheet or whip up a photomanip of the actor/actress you would like to see portray your character or do it complete as a CG render of your OC in action or or or …

There are only two conditions: (1.) It has to be a completely original character never before seen or heard of on the shows. And (2.), please give us the name, species, gender and age of your OC on the entry itself.

I was a bit flummoxed at first, but then I remembered something: Lieutenant Vilix'Pran and Captain Boday, both from DS9. I've got vague images for them both in my head: Pran is basically a nest of tentacles with several sets of dragonfly-like wings, and Boday is vaguely humanoid - similar to an Alien/Xenomorph - but with a lovely transparent skull.  As well as his transparent skull, Boday was said to have a toothy grin. And how much more toothy does one have to get to best an Alien/Xenomorph's "grin"? Especially when the little mouth is out.

Plus, I read an article ages ago about the Alien (the original creature design, I think) having a partially transparent forehead within which was an actual human skull. I think it would be an amusing juxtaposition to see an alien so frightening but with a big smile - And this would be someone that I could definitely see Jadzia dating!
I've had a few ideas and sketches that I've been sitting on for a little while now, waiting for an opportunity (and the time) to make something of them, and the November Art Challenge was that opportunity. I worked on my Gallamite design in an attempt to come up with a crewmember for either a Starfleet ship or a private fleet vessel. 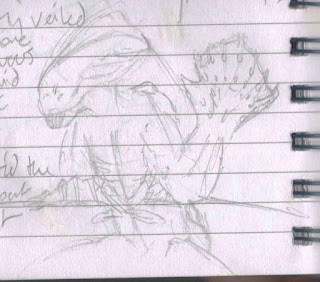 On the right, we have a Gallamite seated at a glass table, inspired by the Alien xenomorph with some icthyoid tendencies (barreleye & toadfish), and has two pairs of upper limbs (the smaller, lower pair are crossed and resting on the tabletop), a pair of lower limbs, and some sort of tail.


Although, I then leaned more towards an Alien-Beluga whale concept - mainly for the lovely Beluga smile, its whiter-shade-of-pale colouring, and smooth physical features. If this were a Starfleet officer, I envisaged it to be a cetacean liaison officer or navigation specialist in Cetacean Ops aboard a Galaxy-class starship. 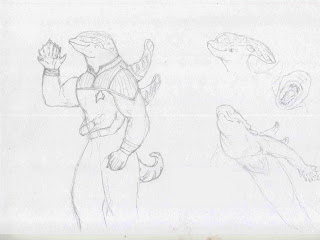 I think my OC's looking a little too Beluga-friendly here with the exception of the far right "mouth-open" sketch. Also, I decided not going to give him an elongated head/crest (top left) as I thought it would just get in the way. As would those ridiculous circular shoulder-pad thingies that the xenomorphs have. But he's keeping the middle pair of smaller (vestigial?) limbs that the Alien Queen has.

So, here's my OC looming up from the depths of Cetacean Ops to scare a couple of the Takaya's Whales who work there (he loves to frighten those silly whales). 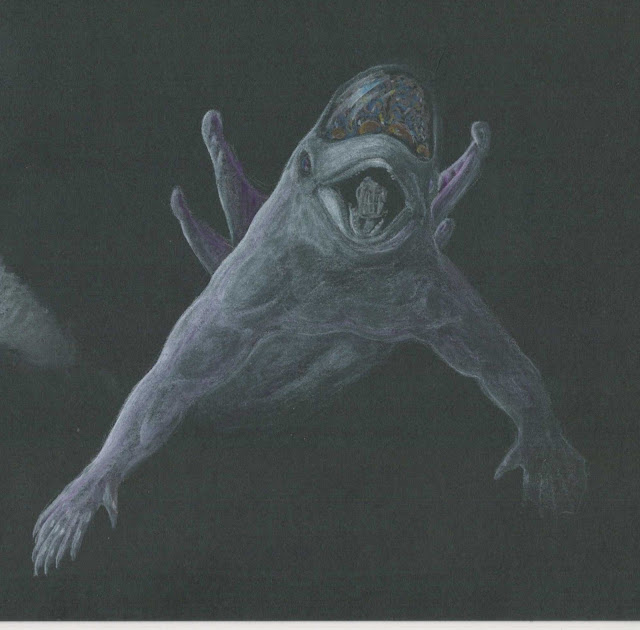 I think the whale-frightening gives him an air of mischief and playfulness, as well as an awareness/acceptance of his not-always-adorable visage!

And now, on to the final designs:
This first one was a hasty slap-together but isn't immediately obvious as Star Trek. However, it's got a bigger image than the second, and more information. 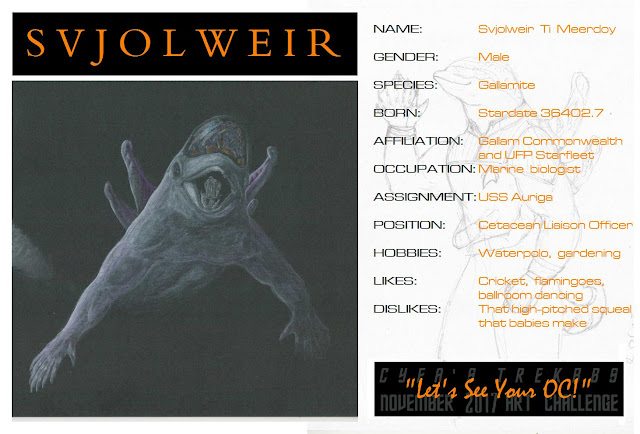 This next one was also rather hasty, but at least it has a bit of a Star Trek aesthetic going on. Unfortunately, I had to shrink my drawing of Svjolweir to fit it in a pre-existing LCARS template I'd made. As I ran out of time, this is the one I chose to be my final entry.


[Widescreen xenomorph images from the film Alien: Resurrection; Beluga's from websites I can't remember; "Say cheese!" from the set of Alien³]


Posted by Inexplicable DeVice at 21:18