I knew something was amiss the moment I burst through the bottom of the cloud layer last night...


The girl sighed in relief and wiped her soot-covered sleeve across her moist brow. There, she thought, the cellar was full of coal again. That lot should last into the middle of next month. She leaned the shovel against the wall next to the scullery door before turning back slightly to close the coal chute hatch. As she reached out to the hatch a faint glingling noise behind her made her turn.
"Oh!" she exclaimed, her hand to her mouth in surprise. There before her, dressed head to toe in pink taffeta, encrusted with enough sequins to sink a battleship, was an elderly lady beaming gummily and clutching a twinkling wand.
"Don't just stand their gawping girl" the pink apparition scolded. "Do you want to go to The Ball or not?"
"Oh!" she exclaimed again. The old woman rolled her eyes. "Oh, of course I do! But they won't let me go, even though I've finished the chores. Besides" she added, "I've got nothing to wear."
"We'll see about that" and the OAPP* pointed her wand at the girl's potato peel 'shoes'. Ka-Zam went the wand. However, neither of them noticed the rather generic sound because another noise had caught their attention.

"What's that noise?" the girl asked with a quizzical look on her face.
"Beats me" said the old woman looking around the yard. "Where's it coming from?"

"I don't know." Both women looked at each other for a moment before the penny dropped. They looked up.
"Look out below!"
"Oh, shi-"

The girl brought her arms down from in front of her face where they had shielded her from the blood splatters. She opened her mouth in shock, but before any sound left her lips, the scullery door flew open, crashing into her with such force as to knock her clean out of her shoes and into the coal chute. A figure burst out of the scullery and surveyed the scene.
"Oof! I think I just landed on someone" I said as I extricated myself from folds of pink taffeta.
"Not just someone" the figure said. "You've clobbered a fairy godmother! Either that or Barbara Cartland."
"Well, at least I didn't knock some grubby girl down the coal chute!" I looked up at the fey figure. It was, rather shockingly, CyberPete. "What are you doing here?" I demanded.
"I'm not sure. I was reading when I heard a loud crunching sound. I got up a bit too quickly I think because everything went black and then, when it had cleared, I was here. I... OH!" CyberPete had looked down and seen the girl's transmogrified shoes. He fell to his knees before the glittering crystal heels. "Ohhhhhhhhhh..." he drooled. It was very unbecoming.
"You might as well have them" I said. "After all, their intended owner won't be needing them anymore." 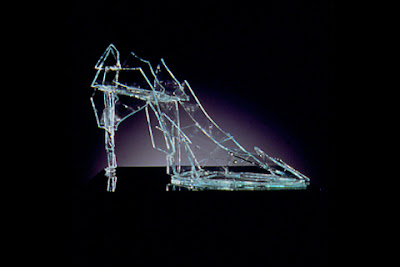 I narrowed my eyes as I realised what we'd stumbled into. Before I could explain, strident shouting emanated from within the house.

"Haven't you finished shovelling that coal yet?" one nasal voice yelled.

"You've got to cook our dinner before we go, you know" a second voice added.

I glanced at CyberPete as he carefully picked up the heels, a look of realisation on his face. "Just coming" he trilled in a rather grating falsetto, a grin starting to play across his face.

"C'mon CyberCinders. Let's go and sort out those harpies."

We made our way through the scullery and into the hall, all the while listening to the orders of the two sisters.
Suddenly, there was silence. A second or two later, a different, deeper, northern voice came through.

To our surprise - and horror - Tazzy burst through the parlour door, gagging. Piggy, trotting after him, smiled proudly, trailing thick green smog.

"Who were those two mongs?" he oinked.

"Al'right, IVF! They keeled over after Piggy dropped his guts. They might still be alive - One of 'em were twitchin' a bit."

"Don't count on it" Piggy added, proudly. "'Ere, who's that poofy cunt?" and, thankfully, he pointed past me.

I turned to see CyberPete, having crammed his feet into the crystal heels and wrapped himself in a velvet curtain, sashaying elegantly up and down the hall. The image was spoiled somewhat by the trickles of blood running down the sides of the shoes from where he'd obviously crammed a bit too much. I slapped my hand to my forehead. "That's CyberCinders."
The Yorkshire poofs looked on knowingly.


Hearing a loud crunch from outside, the haughty middle-aged woman pulled up her drawers and smoothed down her long skirt. What's that dratted girl done now, she thought. She emerged from the garderobe only to be confronted by a brazen hussy exposing her cleavage in a very low cut, tight fitting top.

"Who the devil are you? And what are you doing in my chambers, you harlot?!" She screeched.

"Harlot?!" MJ's eyed widened in shock before she punched the rude bitch in the face. "You stuck-up cow" she retaliated, as the woman staggered backwards into the garderobe. Following her, MJ shoved the flailing woman into the hole. "Eat shit" she said smugly before turning on her heel and leaving the stinking closet. "Now. Where the Hell am I?"
A thunderous fart from somewhere below answered her.
Ah, that sounds like Piggy, she thought, and left the room to go and find him.

Posted by Inexplicable DeVice at 06:38