Isn't It Drafty In Here?!

It was while dragging a draft post about books into 2021 and getting it fit to be published, that I noticed that there were 1300 posts on this blog.  But, upon closer inspection, 16 of them were drafts, so it'll be at least a couple of months before I hit that nice, round 1300 published posts.

I pondered deleting the drafts as some of them are bloody ancient, but I thought I might actually finish them off one day and publish them.  Then I got to wondering if anyone else has a load of half-finished (or less) posts languishing in their "drafts" folder.  So, do you?  If I show you mine, will you show me yours?  I hope so, because here are mine: 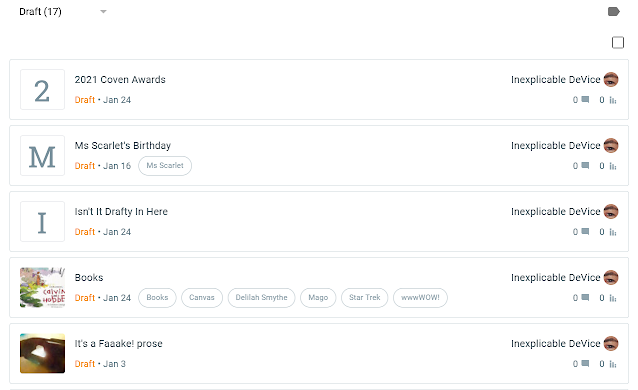 Out of these first five, I'd just about managed to get "Books" in some sort of order, but I've ruined it with some questionable font/size choices, so that's going to take some unravelling.  Then, I'm preparing for this years "Coven Awards" as I had an idea for a revamp which means taking note of things as they happen, rather than trying to remember stuff in a panic half-way through December.  There's also some preparation for a trip over the Cusp for "Ms Scarlet's Birthday" in March - but the rest of that post depends on whether we get this pandemic under control and the Cusp opens its borders.  Obviously, "Isn't It Drafty In Here" is this post, which just leaves "It's a Faake! prose" - which I will probably delete it as it's only a half-arsed Star Trek story that, despite the Jan 3 date, has actually been hanging around since at least Feb 2019 (which is the penultimate time that I edited it).  The only reason it's still hangning around is that I've been using it to upload images to my Blogger gallery, and Jan 3rd was the last time I did that... 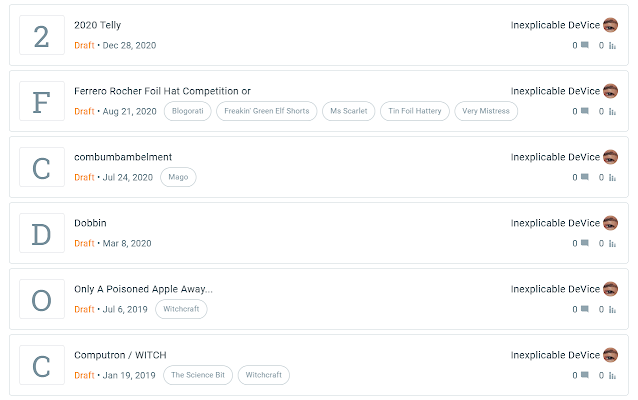 Of this second batch, "2020 Telly" was part of the 2020 Coven Awards, but I cut it for time - and because I couldn't decide/choose my favourite shows or be bothered to write about them.  I think I'll just delete this one as well.  The "Ferrero Rocher Foil Hat Competition" used to be a generic Tin Foil Hat Compo post but I updated it after a chance comment from The Very Mistress over at Ms Scarlet's Wonky Words.  "Combumbambelment" is something Mago once said.  "Dobbin" is from a nightmare over the Cusp that I think I'd rather forget - although, Timothy Claypole will probably make things better...  "Only A Poisoned Apple Away" is some witchy stuff, and "Computron / WITCH" is leftovers from LẌ's birthday book two years ago. 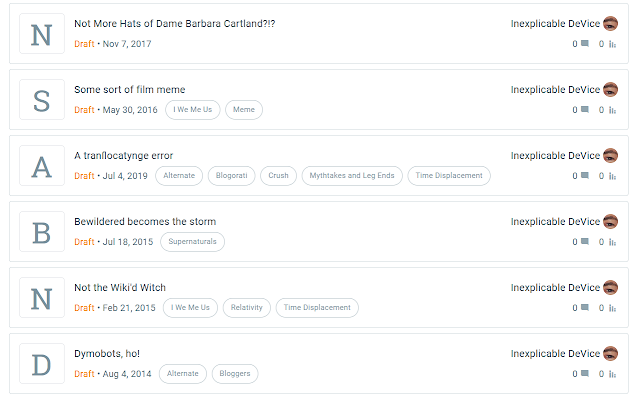 And the final six?  Oh, dear...  Except for "Not More Hats of Dame Barbara Cartland" (the other ones can be found here and here) and "Bewildered Becomes the Storm", these are all a LOT older than they look.  Especially the film meme.  But ESPECIALLY "Dymobots, ho!"

P.S. I have just nearly cried at the end of Superstore S4 E8 when Mateo is shitting himself about getting found out that he's an undocumented immigrant and getting deported, then Glenn (the store manager) tells him his fake Social Security number checks out - and "Merry Christmas".

Posted by Inexplicable DeVice at 22:03