Continued from It's That Time of Year...
(which was itself continued, sort of, from In Space, No One Can Hear You Peep)

"You're dithering again."
"I am not!"
"Procrastinating, then."
"How dare you!"
"Then how do you explain the crappy constellation post from a couple of days ago?"
"Well...  Um...  You see..."
"Ha!"
"Oh, shut up.  You're just as bad as m-  Look out!!!"
Broom violently lurched to starboard almost unseating the bickering witch sitting astride it.  Passing to port in their previous flight path sailed a heavily laden flying carpet piloted by a small human of the female persuasion and an even smaller and very excitable dog.  The woman, oblivious to the narrowly averted collision was struggling with a scarf that seemed intent on smothering her and, in the process of disentangling herself from the scarf, elbowed a precariously perched box off the carpet.
As they gathered their scattered wits, the witch watched as the small black box disgorged dozens of square, black envelopes, most of which fluttered slowly towards the ground.  A few, however, fell with rather more gusto.  Clearly they contained something with a bit of weight to them.  Then realisation struck: They were-
"My After Eights!" the magic carpet woman shrieked as she came to a halt.  Her distinctive voice brought the witch to his senses.  As did her yapping, bouncy dog.
"Ms Scarlet?!?" he asked, unable to contain his incredulity as he manoeuvred his broom towards her now hovering carpet.
Ew! This sounds, horrifyingly, like a lewd euphemism.
Urgh.  It does, doesn't it?!  Well, we're not going to change it now.
"Mr Devine!"
"What are you doing up here?  I was just about to collect you."
"Well, I wondered where you were - you're very late, you know - and thought I'd better make my own way there."
"Oh.  Yes.  Sorry about that.  I got a bit caught up with constellations and rampaging jelly babies et cetera et cetera.  You know how it is?"
"I suppose so" Ms Scarlet grudgingly agreed, trying not to think of gold leaf, smelly green shorts, and attic-bound nieces.
"I didn't know you had a magic carpet?" IDV asked trying to get a good look at it beneath all Ms Scarlet's paraphernalia.  "Where did you get it from?" 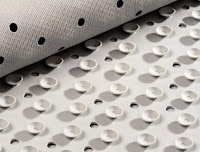 "Ah.  Um.  It's, uh...  I got it from..." Ms Scarlet blushed with shame as she tried to avoid answering.  "Oh!" she shrieked as Broom dropped a few feet giving IDV an unimpeded, but highly improper view of the underside of her 'carpet'.
"It's a...  It's a..." IDV stuttered in disbelief.
"Boots the chemist" Ms Scarlet muttered.  "Yes, it's an octopus sucker bath mat!"
"I don't quite know what to say.  Apart from that I'm very impressed that you got the thing to fly!"
"Yes.  Well.  It's surprising what a bit of desperation can accomplish.  Especially when one's ride is extremely late..." Ms Scarlet tailed off as she noticed a black shape fluttering up from the ground.  "My After Eights are coming back!"
IDV peered down to where Ms Scarlet was looking.  Sure enough, something black was heading their way from where the chocolate-covered mint thins and their little black paper envelopes had fallen.  Only it wasn't a collection of delicious After Eights.
"Quick!  We've got to get out of here!" IDV yelled, attempting to point Broom towards open sky.
"What is it?  What should I do?" Ms Scarlet had begun to panic and, in between trying to calm Sid down and not lose anymore chocolate to greedy gravity, inadvertently steered her flying bath mat into Broom's new flight path. 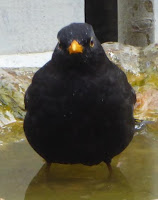 "Get out of the way!  Get out of the way!!" But it was too late.
Impervious to the ribbons of thaumic energy that twisted and knotted through Broom's bristles, the most diabolical little stinker in the world (in any world, really) alighted upon them, glaring daggers at the two witches.  But mostly at IDV.  Mostly.

Several long, cold, interminable hours later, they arrived at their destination, barely making eye-contact, never mind actually speaking to one another.  The blame for this breakdown in accord was placed firmly upon Beaky, but all parties knew it was really because someone pilfered the last travel sweet from the icing sugar dusted tin somewhere over Burgundy... 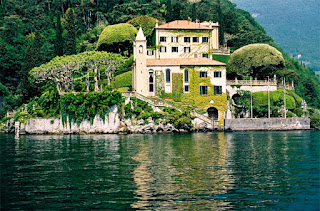 "Welcome to Italy!" LẌ greeted the witches as Broom and the magic bath mat touched down on his veranda.
"I need to use your loo, Mr Lax.  Rather urgently" Ms Scarlet replied as she crab-stepped towards his villa with her knees together.
"Oh, this is lovely, LẌ!" IDV trilled.  "Much nicer than George Clooney's.  Far less gauche.  Yes.  Splendid!"
"I thought we'd have some drinks out here as it's nice" LẌ said, waving towards the balcony overlooking the lake shore.  "My myrmidon will be out momentarily with the refreshments, and our other guest will be joining us shortly.  Ah.  Here come the rest of the welcoming committee."
Sid jumped off the bath mat and stood quivering with barely contained excitement at the sight of two sleek, smug-looking Siamese cats wending their way sinuously towards them.  Beaky flew down from the tree he'd been perching in and landed on Sid's head, glaring at the approaching cats.  LẌ winced.
"I'm sure they'll all get along?" he said with an anxious laugh [worried].  "Do you, uh, need to... go?" he asked IDV.
"Oh, no.  I haven't broken the seal - I'll be good for another hour or two, thanks."  IDV gestured to Broom, the bath mat and the pile of... stuff "Where can we put that lot?"
"The summer house is pretty clear, they can go in there, if that's okay?"
"Lovely.  Would you give me a hand with Ms Scarlet's things please, LẌ?" IDV asked as he unpopped the suckers from Broom's shaft, separating the two arcane flying contraptions.

After storing the travel paraphernalia, the two men-

Well, one man and one poofter.
Hey!
What?  It's true isn't it?
Well, yes, but, still...
Anyway... The two men didn't get to do anything because the SubCs' interruption used up enough time to allow Ms Scarlet to return:
"Look who I found - Mr Mags!" Mago followed Ms Scarlet out of the villa, laden down with a large tray full of drinks and canapés.
"I wish Beast were here" he muttered.  "He normally gets relegated to skivvy duty in these stories of IDV's.  I should be myrmidonning or some such, not fetching und carrying.  Hmmph."
"What was that Mr Mags?"  Ms Scarlet's feigned obliviousness was met with another 'hmmph'.  "Shall we sit over here?  Mr Mags, you can pop the tray down here, thanks.  Sidney?  Where are you?  Come here!  Come here!"
IDV watched in mild amusement as Sid reluctantly slunk over to his mistress and sat down under her chair.  Ms Scarlet caught sight of IDV's face and scowled.  Her frown soon turned upside down when Beaky came swooping down to perch on IDV's chair back and unleashed a strident shriek right in his ear.  IDV almost jumped out of his skin.  LẌ just looked smug as Lola and Nikko leapt unto his lap then positioned themselves on the arms of his chair like a couple of sphinxes.  The look didn't last long, however, as Nikko suddenly coughed up a massive, still twitching, spider in LẌ's lap.  Mago grinned from ear to ear.
With the distraction of the travel hostilities having worn off, the natural size of the coven* had found space to begin asserting itself.
The four of them gulped down sipped their drinks in silence for what seemed like an age, but was probably only about twenty seconds, before IDV spoke, his nerves having finally stopped jangling.
"So, I take it you've got it?" he addressed LẌ and Mago.
"Ja.  It's parked in the courtyard.  Und I must say, LẌ did a much better job this time than mit the Space Shuttle for Princess's birthday."
"Danke, Mago".
"Well, we'd better get everything organised before she gets here then, hadn't we.  Ms Scarlet?"
"Wot?  I mean: What?  I mean: Pardon?"
"Have you got all your calligraphy kit to do the hull pennants and signage?"
"Oh.  Yes.  I think so, Mr Devine.  Yes."
"Good.  I've got all the star maps, I just need to install them."  IDV looked a little panicked.  "LẌ?  I might need a hand?"
LX sighed.  He was never going to escape the duties of 'personal I.T. consultant'.
"Oh!" Ms Scarlet exclaimed.  "Oh!  We must Christen the ship!"
"With what?" IDV asked.  "The last time anyone had a sniff at Champagne was when that Danish puff Cyberpoof was here."
"Well, we must have something?  LẌ?"
"Don't look at me.  George Clooney 'borrowed' my last case of Champagne for his last party.  He took the Asti Spumanti, too.  And my emergency bottle of Lambrini."
"IDV" Mago piped up, "don't you have a bottle gin about your person?"
"I don't like what you're insinuating, Mago.  Unlike our still absent member, I can't secret something that size in a handy orifi-"

A flash of light briefly illuminated a large puff of smoke which quickly dissipated, leaving a recognisable figure with her hands upon her hips.
"Hey!  Your man-snatch has handled a battleship full of seamen (ha!).  I'm sure it can cope with a litre bottle of spirits."  It was The Very Mistress!

Well, dur!  Who else was it going to be?
It could have been Princess?  Or Norma?  Or Dinahmow, maybe?
Oh, you're grasping at straws now.
"Shut up, you two!" The Very Mistress snapped to everyone's surprise. Not least IDV's SubCs themselves as no-one else but him had ever addressed them before.
"My days at the dock were a long time ago" IDV sniffed.  "Besides, my 'man-snatch' has healed up now through lack of use."
The Artist Formerly Known As MJ gazed at the assembled coven.
"Hello, Bitches!"