Two of our flying saucers are missing

... Continued from One of our flying saucers is missing
In the cramped circular control room aboard the hi-jacked flying saucer, Eros hi-fived LX and Mago. "For a mission well executed" he crowed.
"Yes, it was fun" LX said looking pleased. Although his demeanor darkened a touch as he turned to Mago. "Even if someone did let Beast escape."
"But the poor Beast" Mago acknowledged with a look of pity upon his face. "MJ had tied him so tight his wrists and ankles were chafing. How was I to know he'd temporarily incapacitate me with the release of chick pea curry-related gas and make good his escape?"
"Look, forget about Beast for now" Eros assuaged. "We know the secret formula is hidden somewhere in this flying saucer. And once we find it then we never have to worry about chick pea curry again. We just need to find somewhere safe to set down so we can all have a good look around."
"Maybe now's not the time" LX interrupted, turning his head from the rear-view mirror. "We're being followed."


"We can't let the the secret formula fall into their hands" Ms Scarlet wailed wringing her hands. "They... er... they will underestimate its true potential and everything will go horribly wrong and bad stuff like that."
"Christ!" I yelled as we headed straight for a power line.
"Keep your hands on the controls!" MJ added.
Ms Scarlet flailed at the dashboard and somehow managed to bring the wayward contraption under control again and avoided the power line.
"Told you you should have let me fly the saucer" I groused, avoiding Scarlet's glare as I'd nabbed her line.
"Ha!" MJ scoffed. "Not after your previous performance, IVD. Perhaps you'd better stick to Broom?"
"I would if it wasn't on the other 'saucer."
"Oh, stop grumbling. You'll get it back. Now" MJ stated turning back to Ms Scarlet, "how are we doing in the pursuit of Mr Mago and the Texas Twins?"
"Well, we were making some headway but I think they've spotted us as I ran out of trees and clouds to hide behind" Ms Scarlet said. "Luckily, when Mr Devine crashed their saucer he really must have broken their acceleratrix as their top speed seems somewhat hampered.
"I didn't crash it! It just got away from me momentarily..." I protested.
"Whatever" Ms Scarlet said derisively as she gathered some of my indignation and denial to bottle-up later as part of her 'bottled emotions' art.
"Quiet!" MJ snapped, nearing the end of her rather short tether. "Has this thing got any weapons? We need to shoot that thing out of the sky before the natural size of this coven reasserts itself."
I resignedly accepted MJ's reasoning even as Ms Scarlet frowned in confusion. "What?" she asked.
"Your average witch is not, by nature, a social animal as far as other witches are concerned. There's a conflict of dominant personalities. There's a group of ringleaders without a ring. There's a basic unwritten rule of witchcraft which is 'Don't do what you will, do what I say'. The natural size of a coven is one. Witches only get together when they can't avoid it" I quoted from the fictional, but very observant, Witches Abroad by Sir Terry Pratchett.
"Oh" Ms Scarlet said screwing the cap on a bottle. "Makes sense, I suppose."
"Well?" MJ directed at me.
"What?"
"Weapons!"
"Oh, yes." I fumbled at one of the secondary consoles next to where Ms Scarlet was rather expertly now, I had to grudgingly admit, piloting our flying saucer. "We've got a couple of Mertilizer beam arrays and an emergency Demise-O-Bomb. Although" I added after reading the instructions, "I wouldn't recommend deploying the Demise-O-Bomb within a planetary atmosphere."
MJ peered over my shoulder. "No Atomic Napalm Neutralizer?" she asked.
"No" I replied after checking the manifest. "It doesn't look like that's due to be installed until Tuesday."
MJ gave a drawn out sigh. Ms Scarlet and I wrinkled our noses - she'd been eating poutine recently. "OK. Set the Mertilizer to Shake-n'-Bake and take out their salad spinner-thingy."
"You mean the Freem drive?" (I'd been doing a little research on our appropriated transport)
"Whatever. Yes."
"What if Beast hid the secret formula there?" Ms Scarlet asked.
"Did you?" MJ demanded of the re-trussed Beast. He glumly shook his head from his position at the communications station, a superfluous console seeing as the Chambers coil had given out decades ago.
"Can you keep us steady while I aim please, Ms Scarlet?"
"Right-O."
"I have them in my sights!" I declared.


KA-BOOM!
Eros, LX and Mago picked themselves out of the wreckage of the barn they landed in, grumbling as they did so.
"You know, I think IDV used the same explosion as in part one" LX muttered.
"Knauser!" Mago spat.
"Yeah, what a cheapskate" Eros agreed.
"Uh, oh. We've got company."
The other two looked up to where LX had noticed the witches' descending flying saucer pierce the column of smoke from the burning remains of the barn. The three landing legs deployed and the 'saucer came to rest nearby with a surprising lack of incident.
"I guess IDV isn't driving this time?" LX quipped. The three men chuckled until the egress ramp unfurled beneath the 'saucer and the witches appeared, bickering as usual.
"Oh, no!" Mago gasped. "They've recaptured Beast!" And there, trailing the witches down the ramp at the end of a tether, was the hapless Beast.

Just then, a large black car pulled up. Inexplicably, it was Norma in Ruth Buzzi's Lincoln Continental. 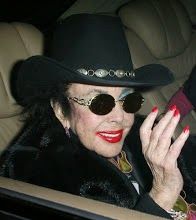 "Can you hurry this along?" she asked with more than a touch of exasperation. "Some of us have got things to do and don't have all day to wait for this farce to come to an end. Oh, hang on..." A shrill buzzing sound emanated from somewhere inside the Lincoln. Norma ducked her head back inside before reappearing with a black rotary phone handset clamped to the side of her head. "Yah. Yah. OK, Liz darling. See you in ten." She replaced the handset and waved dismissively at us out of the window. "Got to dash. Just send me the spoken word CD." And with that, the Lincoln, with Norma firmly ensconced within, roared off down the farm track that led away from the scene of confused carnage we found ourselves in.

"You heard the lady" MJ shouted, her hands on her hips. "Let's get this show on the road. Or in the air, or wherever. Beast" she continued, "just tell us where the damned formula is. We don't have time to fanny around any more."
"Oh, all right" Beast huffed. "It's tucked in the sun-visor of your flying saucer."
"Ours?" Ms Scarlet and I both exclaimed, looking at each other then at the dumbfounded Eros, LX and Mago.
Beast just smirked.
"It's been in our 'saucer this whole time?" Ms Scarlet radiated disbelief. "But you indicated that it was in theirs!"
"Well, I didn't want to make things easier for you" Beast said smugly. "Although, had I known I'd be blown into a barrel and tied up so much, I wouldn't've gone along with this charade at all. I'd rather be working at Cafe C!"
"Here it is!" Mago declared triumphantly.
We all turned to see Mago trotting down the ramp of our flying saucer, a scrap of yellowed paper waving in one hand. He stopped before he reached us, clearly reading from the paper, his face a picture of confusion.
"What does this mean?" he asked.
"Give it here!" MJ said striding over and snatching it from Mago's grasp and giving it a quick once-over. "Hey! This isn't a formula for a Weapon of Mass Destruction?! What gives?"
"Let me have a look" Ms Scarlet took the paper and scowled intently at it for several moments. Then her face fell. "Oh, no..."
"What? What is it?" Eros and LX clamoured.
"Yes, come on" MJ said noticing the peculiar shade of green Ms Scarlet had turned.
In between dry heaves, Ms Scarlet extricated an empty bottle from somewhere on her person and started rolling up the paper. "It is a WMD" she said. "I'd only heard about such a thing in legend, but it's real!"
"Yes, but what exactly is it?"
"It..." Ms Scarlet began before clapping her hand over her mouth. She tried again after taking a couple of deep breaths. "It is the reason we have been inflicted with Ma Beasty's infamous chickpea curry."
Gasps of disgust and horror abounded from us all. Even Beast looked to be in sympathetic gastric pain. Ms Scarlet pushed the rolled up paper into the neck of the bottle and quickly screwed on the cap.
"This can never be allowed out" she declared ominously. "The world would drown in its own vomit if this became public knowledge. I'm going to seal the formula forever inside this enchanted bottle so no-one else will be afflicted by the repulsive horror." With a grim look on her face, Ms Scarlet held the bottle over her head for all to see. "Chickpea curry came into being as a retaliatory strike against this: Beast's vile steamed mushroom pudding!"


The End
Although, if you're looking for closure and don't mind being stuck in a narrative loop, just read on.
"Right" I said, returning from the men's flying saucer and brandishing Broom before the group of silent bloggers. "Shall we get these 'saucers back to their secret base, then I'll get Knight and Blacksmith to give you all a lift home in Concorde?"


Continued, of a sort, in... Flying Saucery

Posted by Inexplicable DeVice at 19:17