Well, that's the second quarter of the year almost done and dusted - where is it going in such a hurry??  So, as is now traditional, here's what I've been reading and watching since the last update:

∘  The rest of Typeset in the Future, by Dave Addey  (from Star Trek: The Motion Picture onwards - last seen here, and presented on the right by my little Box Fox, Rutherford, from Star Trek: Lower Decks)

∘  And I'm still reading Little, Big, by John Crowley (I'm just over halfway through, now.  I bought it on Kindle and thought it must be thousands of pages long as it's taking so long to get through, but I've just checked and it's 'only' 564 pages...)

∘  Call Me By Your Name (Netflix)  - This reminded me of parts of my own teenage years.  Not that I was a cool, self-assured teen (far from it, in fact) who had a dalliance with an older man in Italy, unfortunately.  The fly on Timothée Chalamet's shirt right at the end stole the show, though.

∘  Star Trek: Picard (Amazon Prime) - S2, eps 5-7 then I gave up on this incoherant mess, leaving eps 8-10 unwatched.  I should have known after the crushing disappointment of season one.

P.S. I'm still waiting for the Splash remake with Channing Tatum as a merman...

∘  Amélie (Netflix) - Delightful!  One of my favourite films now.  Thank you Ms Scarlet and Melanie.

∘  Russian Doll (Netflix) S2 - Not as good as season one, and not enough adorable Charlie Barnett playing his character's grandmother!

∘  Heartstopper (Netflix) - Just lovely.  If only growing up gay had always been this easy, though.  Still, I hope that today's baby gays have it easier still.

∘  Black Widow (Disney+) - Pretty good, but a Black Widow film should have been made years ago.  It's too little too late now.

∘  Doctor Strange in the Multiverse of Madness (Cinema) - What a crock!  I didn't particularly enjoy the first Dr. Strange film (I don't really like him as a character), but this one is so much worse.  Fortunately, it's not really about Dr. Strange as Wanda Maximoff, the 'Scarlet Witch', seems to be the star, but I think her character has been absolutely shafted.  The end of WandaVision has been completely undone, turning her into a one-dimensional villain.  Also, newcomer America Chavez is just a plot device and gets little to no characterisation at all, and the magic is mostly ill thought through with no subtlety!  Not recommended.  /rant

∘  WandaVision (Disney+) - Some good ideas, but not what I was hoping for.

∘  The Incredibles 2 (Disney+) - Not as good as the original, but that's a very high bar to clear.  Still excellent, though.  And it's good to see Edna Mode again.

∘  Loki (Disney+) - Rather entertaining, but it's watered the Loki character down somewhat.

∘  The Theory of Everything (Netflix) - I loved this biopic of Stephen Hawking, and it's no wonder Eddie Redmayne won an Oscar for his performance.

∘  Jurassic World Dominion (Cinema) - Non-stop excitement that doesn't stay still long enough to for you to dwell on the ridiculousness of it all.  Well, until it's over then it all falls apart, but still: Dinosaurs!

∘  The Umbrella Academy S3 (Netflix) - Not a patch on season two, but still very good.  I really loved how Vanya's transition to Victor (Elliot Page) was treated so matter-of-factly - almost a non-event (which is as it should be, really) - and accepted by all without incident. 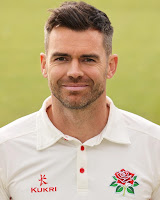 ∘  Detectorists (BBC iPlayer) - Only the gentle and charming first series as of this writing, but I'll probably squeeze in the remaining two before month's end.

∘  Test Cricket (Sky Sports) - Mainly for the gorgeous Jimmy Anderson (on the right there [via]), but I do actually enjoy watching the game even though I still don't fully understand all the rules etc.

Oh, and the commentators are usually quite amusing, too.

∘  Heroes S1 (BBC iPlayer) - I remembered to stop at the end of season one, and not subject myself to the ensuing mess of the following seasons.

∘  Jaws 2 (Amazon Prime) - This always makes me wish I could sail a little boat with the beautiful Mike Brody (and that I was much younger so that there's no hideous age difference.  Oh, and no big, rubber shark).

∘  Crashing (Netflix) - Rewatched to get my Jonathan Bailey fix (as seen here).

∘  Amélie (Netflix) - No, I haven't accidentally added this to the 'rewatched' section by mistake - I watched it again a few days later.

∘  The Craft (Netflix) - Fairuza Balk is suitably bonkers as Nancy, but I just can't get over Robin Tunney's lumpen performance and how terrible her hair is!  I started to watch The Craft: Legacy, but it was just so teen drama awful that I gave up about halfway through.

∘  The Others (Netflix) - Dull.  I only watched this because I hadn't made it through the whole film when I first watched it with my boyfriend at the time.  We ended up falling asleep part-way through (after a very busy day, as I recall, but it might very well have been because of its dullness).

∘  And a smattering of Star Trek Enterprise, Deep Space Nine, and The Next Generation

There'll be less telly watching from now on as I've got rid of Netflix (now that I've seen Umbrella Academy).  And I haven't found any new music, so I'm still listening to White Lies, ABBA, Erasure and Natacha Atlas's "You Only Live Twice", as featured here last month.

Do you see anything you like or loathe?  What have you been reading and watching this year?

Posted by Inexplicable DeVice at 18:21

Labels: Books, Crush, I We Me Us