I've been half-heartedly trying to work out what's keeping us from updating this blog more regularly.  I mean, in the last four months, We've managed a paltry 12 posts - three per month, and they've been a struggle - whereas by this time last year We'd put up 29!  I know it should be quality over quantity, but I can't even claim that what We have published is anything to write home about - with the possible exception of the new and improved Freakin' Green Elf Shorts Travel Map, of course.

Are We not blogging because the weather has been so nice?  Not really.  We've barely been down to the beach so far this year, and only partaken in a few perambulations inland.  Although, I have been spending rather a lot of time up the allotment... 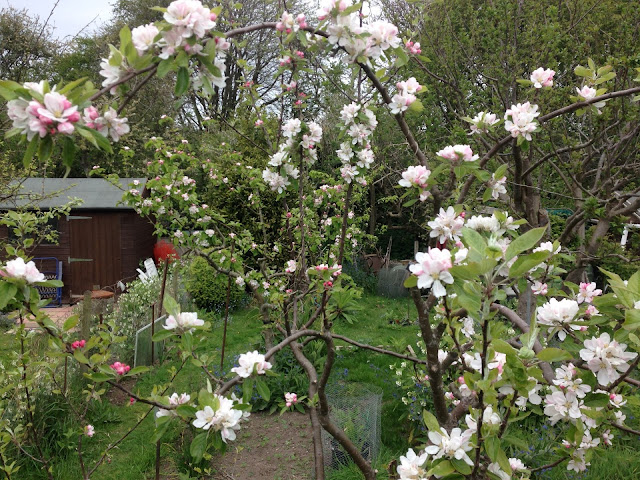 Apple blossom at the Device Allotment
(two eaters and a cooker) 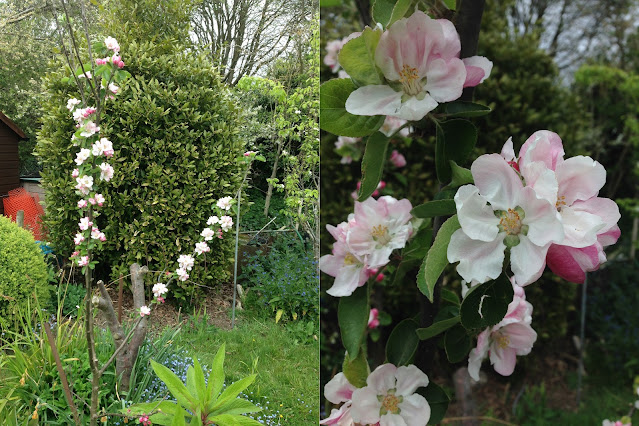 For Dinah, my young Bramley with a close-up of its delightfully fragrant blossom
.  .  .
Have We been dreaming too much?  Hardly.  I don't know about only living twice - We're scarcely living once - but it is an excuse to listen to Natacha Atlas singing the David Arnold produced "You Only Live Twice":

Or, perhaps We have been watching too much telly?  That maybe it?  Having said that, I have decided to quit Netflix (now that I've seen Amélie, Russian Doll (S2) and Heartstopper) because I'm barely watching it (except for old episodes of Star Trek: Enterprise).  Although I might keep it until I've seen The Umbrella Academy (S3) next month...

It certainly isn't because We've been reading.  Because I haven't.  Well, I manage a few pages of Little, Big now and then, but it's very slow going (I started it in November 2021, I think?)

Speaking of reading...  Last Sunday while I was in the bath, I was thinking about books, and one particular thought was about books that made me cry - because of the emotional content, not because someone had thrown a complete set of the Encyclopedia Britannica at my head.  So, why don't you play along too and list three books that made you cry in the comments?  The level of crying can be anywhere between either a prickling of your eyes, to a big, messy, floods of tears, bubbles of snot, gasping for breath, full-on ugly cry.  Here are mine:

Moreta: Dragonlady of Pern - "Black.  Blacker.  Blackest..." from when Moreta and the dragon Holth go between for the last time and never make it out.  This elicited a few tears as I recall (it's been many, many years since I've read this book).

The Long Way to a Small Angry Planet - The shutdown and reboot of 'Lovey' Lovelace, the ship's sentient A.I.   Waaaaaaaaaaaaaaaaaaahhhhhhhhh!!!!

The Time Traveller's Wife - The inevitable shooting of Henry.  This was a lump-in-the-throat eye pricker.

Oh, and in case any of you suspect that We have managed to ensnare a man, of which his seeing to is keeping us away from the blog, you are sadly mistaken.
All our graceful moves in the pool of a morning have been for naught.  Naught!  Not one of the foxy, young lifeguards* have accosted us** in the changing rooms.***
Bah!

To finish off with - as We're not really getting anywhere with this - here's Nancy Sinatra just rubbing it in:

* There are three of any worth: Rob****, an athletic, surly, golden-brown fox who sits in his lifeguard observation chair looking bored and/or slightly angry - and, therefore, very sexy; Fin(ley), pale of skin and dark of hair, this tall, deceptively muscular young man is at once pretty and handsome - a feature of his youth-verging-on-manhood (he can only be 19 or 20); and Matt, who is one of the managers rather than a lifeguard, and looks perpetually tired, but is always cheerful and friendly, and sports absolutely enormous, hypnotically bulging biceps.

*** Almost certainly because, on land and clad only in trunks, We look like some pallid and hideous deep sea creature that has just emerged from an underwater chasm.  Hey!  Although...  you do have a point.  And I am twice their age.

**** I don't know his name, but in my daydream fantasies***** he's called Rob.  However, after overhearing a partial conversation while I was in a changing cubicle, I think he may be called Gary...

Posted by Inexplicable DeVice at 16:17

Labels: Blogorati, Books, Crush, I We Me Us, Mood Swings, Music, Triffids and such