Lesser Secrets of a Constellation Tarot


Last Tuesday, Hound experienced an almost painless viewing of my latest night sky post 30 Seconds of Jupiter, and asked "Now if you can just fill in your maps of the heavens with tarot correspondences life will be perfect!"
I replied: "I've just had a look through the Northern sky constellations and I've found a few that may just work for tarot symbols: Crater, the Cup - a perfect match; the sword of Perseus - another match; the clubs of Hercules and Orion could be Wands; and the torso of Boötes, or the heads of Leo or Cetus, could be Pentacles. I'll see if I can put something together..."

Well, I've put something together.  Only one example from each of the minor arcana, but it's something.

You didn't expect us to do the whole lot, did you?
Ha!  If they did, they clearly don't know us at all.
Anyway, first up: the Two of Pentacles 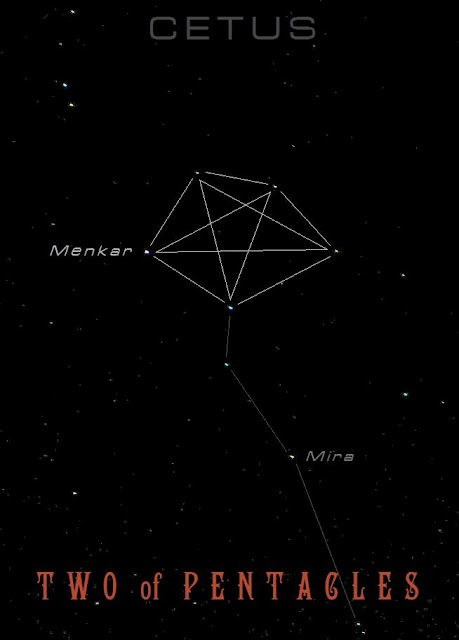 As you can see, the head of Cetus, the sea monster (or whale) makes for a rather nice pentacle.  Clockwise from Alpha (α) Ceti, AKA Menkar, are the stars Lambda (λ) Ceti, Mu (μ) Ceti, Xi² (ξ²) Ceti, and (conveniently ignoring Nu (ν) Ceti) Gamma (γ) Ceti.
The photo that Cetus came from (below) was taken on 22nd January, and featured in post No Moon At All. 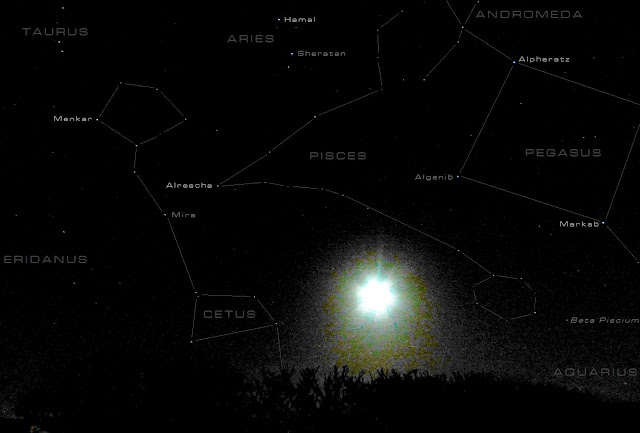 Next: the Three of Cups 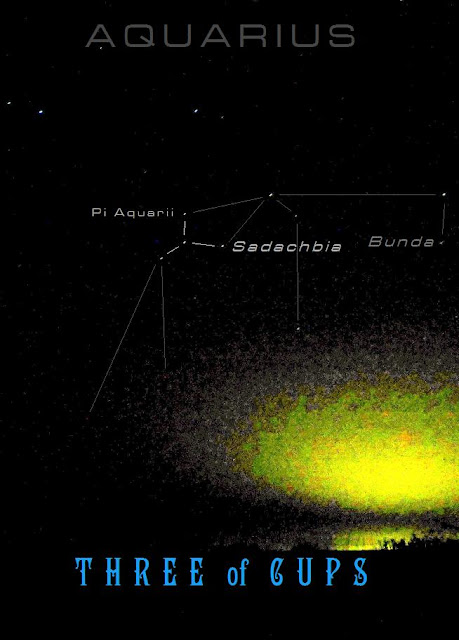 While I did have a photo of Crater, the cup, it's not very good, so I decided to use the Water Jar from Aquarius, one of my most recent constellation photographs from 8th July (featured in 30 Seconds of Jupiter, but not labelled, so I've taken the liberty of doing so, below).
The four stars that make up the Water Jar are Gamma (γ) Aquarii, AKA Sadachbia, Eta (η) Aquarii, Pi (π) Aquarii, with Zeta (ζ) Aquarii in the centre. 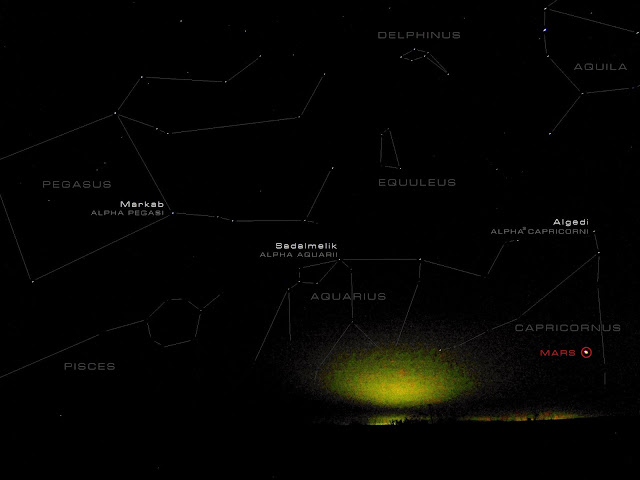 ::
Then we have the Five of Wands 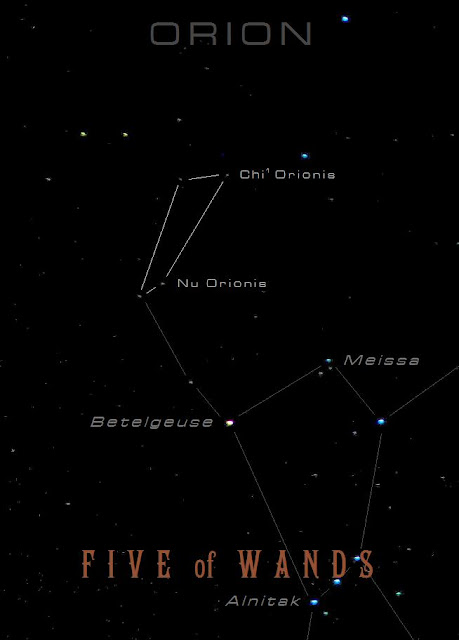 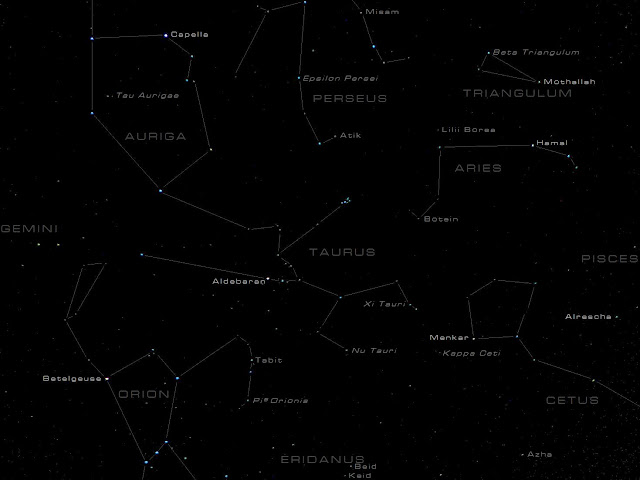 
Finally, the Seven of Swords 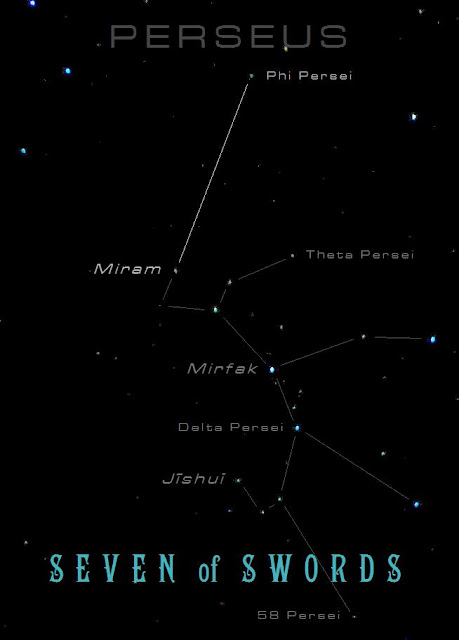 The Sword is provided by Perseus, and is made up of just two stars: Eta (η) Persei, AKA Miram, and Phi (φ) Persei.
Perseus also came from No Moon At All back in January. 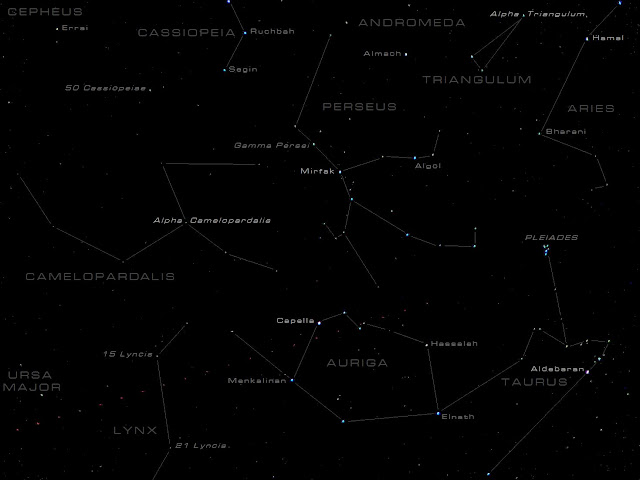 There, Hound.  I hope that was as good for you as it was for me?  If you're really lucky (and I'm not too lazy or distracted), I might manage some of the minor arcana royalty, or even some of the major arcana.  You'd better not hold your breath, though...
oOo 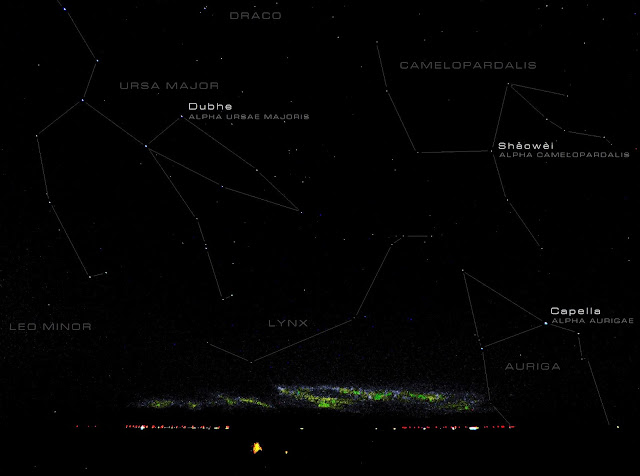 This final photograph is a labelled version of the one from 30 Seconds of Jupiter featuring Ursa Major, Camelopardalis, Lynx, and about half of Auriga.
Posted by Inexplicable DeVice at 21:39