It's A Faaaake! Not The Art Of Star Trek - Murder On The Dancefloor

As far as observing The Very Mistress's "Less Star Trek" for 2018 suggestion goes, I think I'm doing pretty well, as this is only the second dedicated Star Trek post of the year.  Plus, it's barely even Star Trek - It's more Transformers with some music thrown in.
So, on with the show.  Here is the Trek BBS March Art Challenge as set by the winner* of the February challenge:


YES YES YES!!!!
I know you are excited! This is the new challenge for March 2018.
@Cyfa suggested this amazing and totally rockin' art-challenge;
TREKFORMERS!!... (no, not former trekkers)... TREKFORMERS!!


You can take anything or anyone in the trek-universe, and create a Transformer.
From transforming trek-tech like a shuttle pod to a robot
or a captain's chair and back again (what a job, even for a robot)
A Worf-transforming Transformer.... anything.


Any media are good to go, except maby writing poems
But you can draw, photomanip, paint, 3D, sculpt, animate,
or actually build a transformer in star trek style... that would be very impressive!!
So run to your garages and start building, or just draw something. 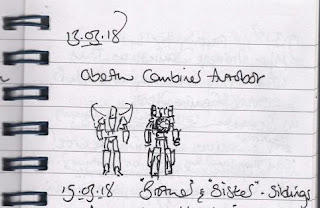 I started off by jotting my first (and only) idea down: A transforming starship.  In this case, two Transformer siblings who combine into an Oberth-class starship - the brother transforms into the primary hull and nacelles assembly, while the sister transforms into the secondary hull/sensor pod thingy. 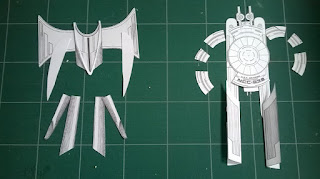 I'd got a rough idea of how the various parts would move around in the transformation sequence but, as I wanted it to be as accurate as possible, I played around with some cut-outs and sketches to work out what moved where. 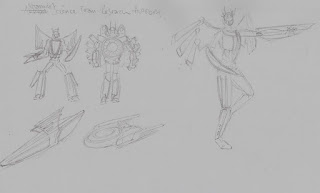 The primary hull & nacelles "brother" is looking a little dumpy... 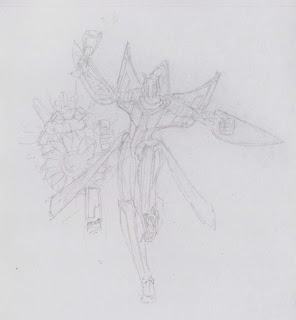 In this sketch (on the right), the secondary hull "sister" was supposed to be in a fighting pose, but looked more like she was dancing, so I popped a drink in her hand and imagined she's tearing up the dancefloor at somebody's wedding.
Her "brother" is running up to remove her before she causes an embarrassing incident (I've changed his bridge-dome-and-vanes torso into a shield to lessen the dumpiness - and a shield is handy as it may stop him from getting covered in his sister's drink!).

And so, after inking in the outlines, colouring with pencil crayon, including a tiny little Insecticon (just for fun), and adding the title etc, here is my final piece: 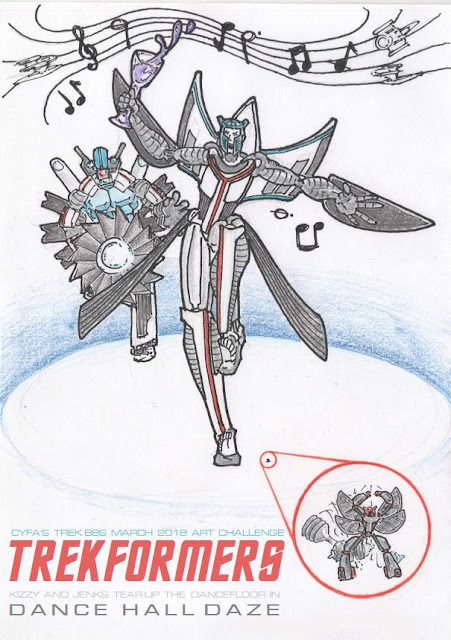 This is Kizzy, an Autobot, tearing up the dancefloor to the stimthump hit "Socks Match My Hat"**.  Her brother, Jenks, is rushing on to save her from embarrassing herself (but mostly him).  He may also - inadvertently - prevent her from smushing-to-smithereens the Decepticon spy, Feinberg (who transforms into Uhura's earpiece).

While I don't have the Harmagian "Soskh Matsh Mae'ha", I'll leave you with "Murder on the Dancefloor" by Sophie Ellis Bextor, and "Dance Hall Days", by Wang Chung:


* It was actually a tie, but I - as the other winner - deferred as I'd won recently (November's challenge), and to speed things up as we were already more than a week into March (normally, another vote is held for tie-breakers which would take another few days).
** Kizzy and Jenks are named after the characters in Becky Chambers' The Long Way To A Small, Angry Planet (last featured on this blog here, although I read it again last month), which is also where "Socks Match My Hat/Soskh Matsh Mae'ha" is from.


Posted by Inexplicable DeVice at 10:10