Continued from Still Twitching
Which followed on from It's That Time of Year...
Which was itself continued, sort of, from In Space, No One Can Hear You Peep

After everyone had recovered from The Very Mistress's dramatic debut - and downed copious amounts of alcohol - they staggered from the veranda to the courtyard.
"Well?" The Very Mistress asked, gazing upon the spacious and quite empty area. "Where is it?"
"Ummm... Someone" LẌ said giving Mago the side-eye, "switched on the cloaking device, and now we can't find the button to turn it off, so you'll have to make do with these design sketches instead."
The Very Mistress snatched the papers from LẌ.
"What is this?  What is it?" she asked.
"You've got it upside down" IDV pointed out.
"Flaming uterus class?" Her face reddening in rage, The Very Mistress 'asked' again: "Flaming Uterus class?!?"  Thunder clouds began to gather overhead.


In a state of panic, Ms Scarlet began reading the starship naming ceremony cue cards, hoping to gloss over the storm.
"To celebrate twelve million years of-"
"Thousand" IDV hissed. "Twelve thousand years!  You're making it worse!"
"Actually" The Very Mistress glowered, "it's only been twelve years."
"Mein Gott!  As little as that?"  Mago took another swig of his drink.
"Ah.  Oh.  Well then" continued a flustered Ms Scarlet.  "To celebrate only twelve years of the House of Infomaniac, I name this ship, er, Infomaniac!"  And she fished her emergency bottle of Babycham from her handbag and flung it bodily towards the centre of the courtyard.
With a smash that made everyone jump, the bottle shattered against the invisible hull of the cloaked starship.  Rivulets of Babycham trickled over its curves, giving away it's shape.
"May the gods bless her and all who sail in her"  Ms Scarlet cried.
"Congratulations Very Mistress!" everyone shouted.

From a porthole in the side of the ship, two droids stared out of the Babycham covered glass.
"You know we're going to have to clear it all up, don't you?" C3-Peenee said.
"Beep boop" replied Norma-D2.


To be continued (at some point - if I can be bothered) in...
Cusp Trek VII: The Hexed Generation

This post is brought to you exactly 12 years to the day, hour and minute* that Infomaniac burst upon our screens (rather like a festering boil or carbuncle that had reached the point of no return).  Adjusted** for time zones, obviously... 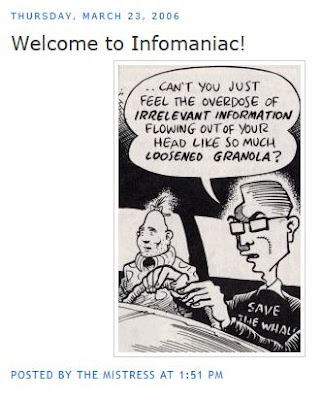 * The hour and minute are really important, as that gave me an extra fourteen hours (nearly) to finish this post.  Yes, I left it until the last minute again, and was rudely distracted from my work on it by family wishing me happy birthday.
** I was going to post this at 7:51 pm UK time which is 1:51pm Canadian time (I think), but I finished this sooner than I expected, so thought it better to post it sooner rather than later.

Posted by Inexplicable DeVice at 13:51