Another year in review 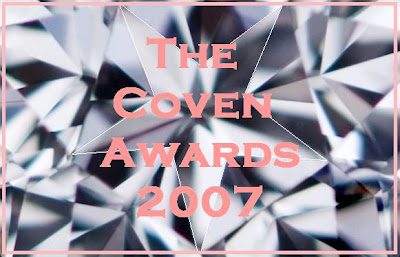 Tragedy struck when the Titanic sunk after hitting an icebe-

No! No, no, no. This year. You're supposed to review this year!

Good gods! It can only go downhill from here.
Does this thing have brakes?
No. We'll have to steer into a gravel driveway and fall over to stop.
Oh, OK, OK... I think we all remember the last awards ceremony debacle here at Castle DeVice. So, SID, you're not to mix Jamesons with champagne. And go easy on the potatoes, this time, too. T-Bird, do wear waterproof mascara and remember to put your hair up. I'm not holding it back this year. Tim, please don't widdle on the flowers again - Poor Spike's still in a state of shock! And no other leavings on the red carpet, either. Although, feel free to wear a clingy, see-through shirt. And those Big Bang pants...
Oh, and I've made sure the flowers aren't too carnivorous this time.

Now, before we get to the awards, here are the first three months of 2007, as experienced by the collective entity that is IWeMeUs, IDV!

January: We discussed the science of death and the subconscious; The unfortunate incident of the exploding woman; That moist bint in my bath and the resulting visit from my centaur cousin, Svaathor da Vjis. Plus, there was the introduction of MirrorMe and some drunken blogging.

February: Where manual labour = concrete snot; The thwarting of MirrorMe; The return of Beaky and Not-Quite-The-Apocalypse. There was also some insight into piloting Broom, magic carpets & spaceships.

March: To shit, or not to shit (in the garden); SuperNatural origins with Knight, Cyfa and The Sisters; My birthday; Escaping a ducking and Getting trapped in the mirror.

Now, on to the awards. First up is Best Book:

The nominees are: Wintersmith, by Terry Pratchett; Reap the Whirlwind, by David Mack; and Tall, Dark and Dead, by Tate Hallaway.

But... But he hasn't even read Tall, Dark and Dead! It's still on the bedside chest, unopened!
Good job it didn't win then, isn't it?
Ahem... And the winner is: Reap the Whirlwind!

The nominees for Best Film are: Stardust, Transformers, Waitress, Sunshine and Knocked Up.

The winner is: Sunshine!

Lawks! I could've sworn it was going to be Transformers.
Well, I thought Stardust was a dead cert. He did see it three times, after all, whereas Transformers only got two viewings.
Stardust didn't get it because that one-trick-twat Gervais was in it. Gurning and being annoyingly unfunny, as usual. What a has-been.
Shut up, you lot!

The winner is, for the second year: Grey's Anatomy!

Must've been for that scene with McSteamy coming out of the shower in that tiny towel.

The nominees for Funniest Blogger Comment are: Piggy & Tazzy's comment on BANG! and their runner up comment in The Freakin' Green Elf Shorts Caption Competition. Now, before you get all huffy, most of you frequently left funny, if not hilarious, comments. However, it was these two that immediately sprung to mind when deciding on nominations for this category. Besides, I couldn't be arsed to go trawling through each post looking at every single comment - You know how lazy I am!

The winning comment is: " Looks like she spontaneously combusted at the muff! *shocked* I bet that stung! Serves her right for rubbing it so often. " from BANG!

Right. Back to the year in review - The next three months:

April: Now, April was mostly procrastination, but there was a pic of me with some of the undead. Oh, Car wouldn't start & Broom got upgraded. Plus, the 200th post - all about eyebrows and some Emotastica!

May: From black to white and black again; An explanation of flirting; The NightShip and the Emergency Wedding; The last Award Ceremony (it still smells of vomit, so view at your own risk); A Pop Quiz for Hot Shots and being Stunned in Sainsbury's.


There. That's six months done. Here're some more awards before we get to the last six months of the year: 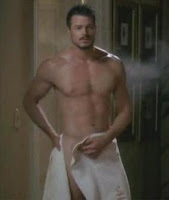 
The winner is: Eric Dane!

The winner is: Charlie Cox!

Oh, he is sooo cute. Especially with long hair. And that smile...
* Name decoded by Tim.

The nominees are: Kerri Russell (Jenna in Waitress); Laura Harris (Daisy Adair in Dead Like Me); Ellen Muth (Georgia Lass in Dead Like Me) and Katherine Heigl (Dr Isobel Stevens in Grey's Anatomy and Alison Scott in Knocked Up).

The winner is: Laura Harris!

Laura Harris (as Daisy Adair with Georgia and Mason)

July: Dinah went on holiday or something, so it fell to me to post clips of Family Guy, hence "Stewie and the nipple hair". I also gave you the story of The Royal Blood Orange and some camera film related nincompoopery.

The nominees are: Light At The End Of The World by Erasure; Robyn by Robyn; X by Kylie and Tangled Up by Girls Aloud.

The winner is: Robyn!

The nominees are: the TV show Dead Like Me; the punk-pop-rock band Shakespears Sister; the TV shows Now And Again and Teachers.

The winner is: Shakespears Sister! If you must see some videos, scroll down a bit - I posted some earlier this month.

There is only one blogger who can win in this category, and that's Skillz. He commented on Forsooth, It Is The Apocalypse with... Well, follow the link and see for yourselves. I think you'll find it both rude, bizarre and hilarious!

December: Trifling in bum-cracks and Snow White in Blogland. Plus this very review!

The nominees for those things that I've wasted time and money on this year include: Beowulf 3D (What a crock of shit! A showcase for rubbish 3D effects on film, with barely any voice-acting. Angelina Jolie sounded like she read her lines as an after thought while sitting on the loo. Anthony Hopkins did actually sound like he was really trying, but deep down, knew it was to no avail. As for Ray Winstone - Well, I never knew that Beowulf came from the east end of London.); The Buried Age by Christopher L Bennett (appalling characterisation of Picard); The Witches Of Eastwick by John Updike (so hard going that I still haven't finished it, months after buying it - I still love the film, though!) and Spider-Man 3 (I totally agree with all the 'less enthusiastic reviewers' from the link).

And the biggest waste of time was: Beowulf. I couldn't bring myself to say "The winner is".

Well, there have been so many (mostly from Piggy), but this one from Tim really stands out.

Another year, another win for Connor. 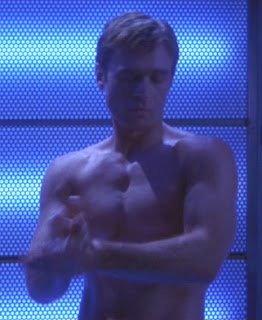 I know Enterprise finished years ago, but he has been in Stargate or something and as such, still qualifies.

It just has to be this guy with "SHIT! THIS THING IS FUCKING AMAZING!!!" as discovered by Tim and championed by The Coven Of Hags. OK, so it's for a beanie, but I think we can attribute it to anything good in our lives. Most especially this year of blogging - Thank you everyone who has made it so!

Posted by Inexplicable DeVice at 06:40