this Freakin' Green Elf Shorts Caption Competition is finally over!

I have decided on a winner. But before that, let's peruse the 'also-ran's'...

First of all, let's get MJ and SID out of the way. Not because they were rubbish - Far from it, in fact. No, their captions had me giggling like a school girl. Here're some of my favourites:


Right. That's those two taken care of. Here are my favourite entries from everyone who isn't SID and MJ:

Krissteen's -
If I could just click my fucking heels I would be fine, but no.... some stupid twat made me drink the wretched fluid in the yellow tub and now I can't move at all.

Piggy and Tazzy's -
As dunking was out of the question due to yet another water shortage, the good folks of Norwich decided just to chop the skinny cunt in half with the garden gate with the rusty hinges.
The open mouthed kids thought it was much better than the planned Punch and Judy show.

And Tatas left this -
One day a hydra was loosed
and elves had been seduced
The hydra, a terrible serpent
his demeanor ever so ferment

So I took up my sword and ran for the cave
trying to be, an elf that was brave
I swung my blade and off with a head
then I kept swinging until he was dead

So home I returned to my peers
basking in elfin cheers.

And finally, Coven member extraordinaire and teeterer atop the Hag Pillar, T-Bird, left this caption -
Host: That spell was supposed to give me a torso like a brick shithouse!
IDV: *snigger*

Now, this lot either don't want to win, or don't have a blog, so can't win. Idiots.

He then realised his mistake, trying to rectify it as follows:

As for the little stiffy comment, I bet you are hung like a horse but you can't really tell from the picture. Please send evidence.

Personally I believe he is massive.

While we're on the subject, Tim left this comment, which is just begging to be turned into a caption:
I just realised - this picture looks like a publicity photo from a low-budget straight to DVD sequel to Mannequin, in which Kim Cattrall's whory old dummy ends up at a branch of B&Q where she's subsequently crushed by fence panelling.

Good lord, by the looks of those legs, Kim Cattrall's really let herself go.

Tim's reason for not wanting to be part of the FGESCC? There is no way on Earth I am going to let those shorts get anywhere near my awesome man-parts.
Well, Tim, we only have your word on your 'parts awesomeness. Perhaps I could inspect them to verify said awesomeness? I'll even give you a certificate.

The prolific and hilarious YNF, who could have won six times over, left these gems:
Dr Who season premiere: The Tardis lands in Oz.

Instead of welcoming committee, IDV thought he was asked to be the welcoming mat--still, many visitors enjoyed his spread.

More than meets the eye, IDV begins his transformation into Trailertron, the mobile home autobot.

To the dismay of CSI agents, the black light revealed the victims legs were completely covered in semen, creating a list of suspects thicker than the first 3 volumes of the Encyclopedia Britannica.

Ho, a queer, a fem-like dear
Ray, his legs bright as the sun
Me, I'm afraid of the shorts myself
Far, away I should run
So, they say he gives great head
La Femme Fatale he is they said
Tea bagging in his shoes of red
and that'll bring us back to
Ho Ho Ho Ho...

So, it gives me great pleasure to announce that the winner of The Freakin' Green Elf Shorts is -

Drat! I knew I shouldn't have extended the deadline for this thing. For there's been a last minute change. Someone snuck in and ruined this carefully crafted post that I'd been working on all Sunday afternoon. You see, I was not expecting any great epiphanies from anyone - I'd assumed you were all utterly spent. While that in itself has not been proven incorrect - Tim, I can assess you for this, too, if you disagree - the person in question changed their eligibility.

Although, in a way, I'm glad they did. You see, I was having great difficulty choosing a winner. I'd got it down to three finalists, and just became a big indecisive mess. I mean, I even started drinking at ten o'clock in the morning!

Suffice it to say:

SID, with: After six hours waiting, IVD realised that his desire to be poked by a munchkin, was highly unlikely

Piggy & Tazzy's: "Mummy! Mummy! Look what the cat's dragging in!"

First Nations, with: Dorothy recoiled in horror and backed away slowly....'Screw Auntie Em and the horse she rode in on, Glinda. YOU wear 'em.' 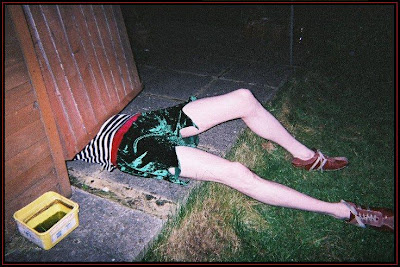 Congratulations Eroswings! You are the next wearer of The Freakin' Green Elf Shorts, you stupid sod. Fancy getting a blog...


Phew! I'm exhausted now. Thank gods it's over with. Eroswings: It's over to you!
Posted by Inexplicable DeVice at 20:00