[This post is brought to you in grudging association with Delilah Smythe Inc.]

To celebrate my 1000th post in just over twelve years of blogging (although I did have a couple of years off, sort of), and the publication of Delilah Smythe's latest book, her autobiography, TV DINNERS (to be published in certain markets under the title Revenge Is A Dish Best Served Boiling), may I present my five favourite Delilah Smythe books:

You cow, Delilah!  I'll get you for this! 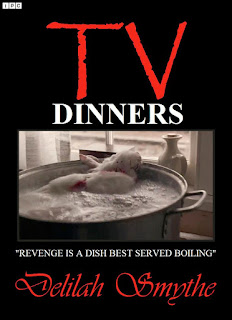 TV Dinners is Delilah Smythe's seventh published autobiography, and gathers together all the old dross that wasn't fit for her first six bios.  It also includes an in depth look at Delilah's contributions to the television and film industry, in particular, her seminal work in Fatal Attraction (proudly used for the cover image), and her iconic (but highly poisonous) blue food for Star Trek VI: The Undiscovered Country.

(The post title "Up yours, Mrs Beeton!" comes from chapter twelve.  Specifically, Delilah's reaction to the news that her then current cook book, Catastrophic Cakefarts, had surpassed the sales of her arch rival's Mrs Beeton's Book of Household Management in the Christmas run-up of 11th-24th December 2016.) 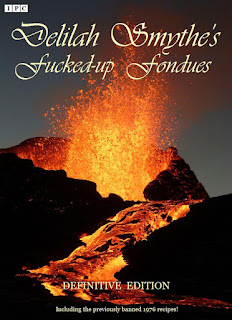 Fucked-Up Fondues was Delilahs' answer to the fondue-craze that swept the nation in the early 1970s.  Caught off-guard, Delilah hastily slapped together a fondue recipe book in 1976 but the ship had already sailed and her effort languished in book shop bargain bins throughout the country.
It wasn't until thirty years later that Delilah revisited the fondue.  After several newsworthy incidents involving fondue brought the classic Swiss dish to the forefront of the public imagination once again, Delilah reworked her 1976 book to include these "fondue fuck-ups", and it was published just in time for Christmas 2007.  Unfortunately, the book was a slow seller, and Delilah was on the verge of being dropped by her publisher until one fateful day near the end of December.
After a serious incident involving a well-to-do Southampton family and one of her recipes - known forever more as The Great Fondue Disaster of 2007 - Delilah made headlines worldwide, and her book sold out within a day.  A second "definitive edition" was rushed to the printers which included several previously illegal recipes (the Fondue Five), plus the very fondue that shook a community to its core and nearly destroyed that Southampton family.
Delilah was back! 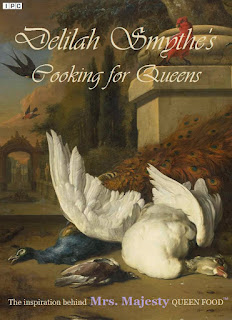 Riding high on the success of Fucked-Up Fondues, Delilah became power mad and, with ideas well above her station, she fancied herself as the ultimate celebrity chef and wouldn't cook for anyone but royalty.  Insinuating herself in royal circles, Delilah found herself as the Queen's personal chef.  Oblivious to her lackey's pleas for her to see reason, Delilah armed herself with the 2nd Royal Tank Regiment, and cut a swathe of devastation across the countryside as she hunted game for Queen Elizabeth II's 83rd birthday banquet.
Cooking for Queens was Delilah's inevitable tell-all exposé after she was banished from the palace.  Packed with gossip, royal secrets, and recipes calling for ingredients so rare and expensive that mere mortals had no hope of finding them, never mind affording them, Cooking for Queens became a best-seller.
Many of the dishes from Cooking for Queens also became the inspiration behind the various flavours of Mrs Majesty Queen Food.  Delilah raked in the royalties left right and centre! 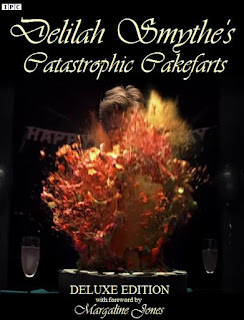 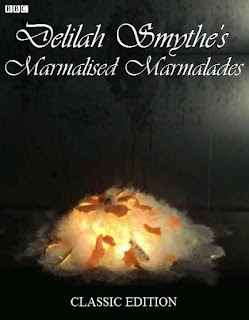 Marmalised Marmalades was Delilah's only book to be published by the BBC.  Having lost National Treasure, Delia Smith, in a bitter contract war, the BBC resorted to taking on Delilah Smythe in her stead.  It was a decision they soon came to regret.
Marmalised Marmalades was published to coincide with Delilah's first live broadcast for the BBC, so it was too late to recall the book once the extent of Delilah's foul mouth was realised on prime time television.  The Director General of the BBC was quoted as saying that "just two minutes into that woman's show, I swear Mary Whitehouse's spinning corpse could power the BBC for the next decade!"

From the back cover:
TV chef, football hooligan, and bane of housewives everywhere; Delilah Smythe shares her favourite short-cut recipes for breakfast preserves in this classic edition of her best selling cook book.
With no shortage of exploding oranges and TNTed tangerines, Delilah's no-nonsense recipes can be completed in seconds, leaving you with the rest of the afternoon free to wallow in front of the TV clutching a bottle of cooking sherry while a legion of tradesmen rebuild your kitchen. 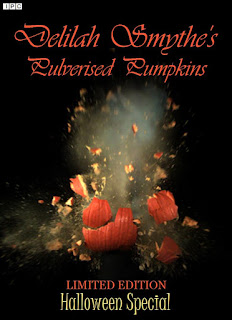 Pulverised Pumpkins is Delilah's latest and laziest book* yet, and unashamed Hallowe'en cash-grab.
In this small collection, Delilah substitutes a select few of the citrus-based recipes of Marmalised Marmalades for pumpkins (and other squashes) for this very slim "special edition"...
While it can be purchased on it's own, if you buy any two of her other books (at the recommended retail price), Pulverised Pumpkins will be inflicted on you for FREE!

* "Pamphlet" may be a better description for this cheap-and-nasty publication that even the staunchest of Delilah afficiandos won't touch with a six inch Pooh stick.  Speaking of which, I've used toilet paper that's thicker than the hardback this is claiming to be.

Right, Delilah.  I've featured your damnable books, now give me the... item, and let's call an end to this sorry blackmailing affair.

Posted by Inexplicable DeVice at 15:42