... but probably not the stars you're thinking of...

After I discovered that the night sky photos I took a month ago are mostly of the same old constellations I've already put up here on the blog, I thought about doing something a bit different.  While labelling some of those stars in constellations such as those seen in Constellations from a Nightshade Tarot, Is There Somebody at the Door?, No Moon At All, and Waiting For A Star To Fall, I recognised some of the nomenclature from Star Trek (and other shows*), and decided to label some of my photos with stars only seen or mentioned in that august show.

Much research was conducted using Memory Alpha, Wikipedia, and my trusty Universe book - so much so that I became a little overwhelmed and had to have a sit down with a massive gin and a huge slice of chocolate cake!  Once I'd got over it however, I began trying things out... 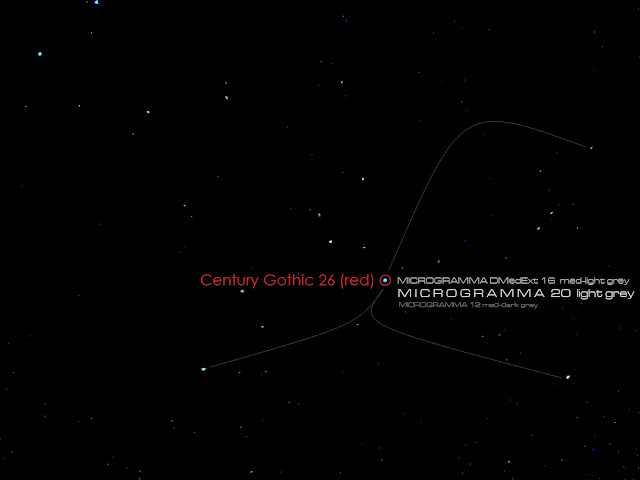 I liked Microgramma D Medium Extended that I'd used for the previous constellation pictures, so I decided to stick with it for labelling these new ones.  For the star's Latinised Bayer designation, e.g. Alpha Lyrae, I chose 16 pt in a medium-light grey.  For its traditional name (approved by the International Astronomical Union), e.g. Vega, I increased the font size to 20 pt and the brightness of the grey.  And for the citation (i.e. which Star Trek episode or film it appeared in, or was mentioned in), I went with a darker grey in 12 pt.
Then, to add something a little different to the previous constellation pictures, I circled the star with a red 26 pt "O" in Century Gothic - one of the few fonts in my limited selection with a perfectly circular O - and used it to denote the star, planet or moon that featured in the show.

Next - Choosing a map: 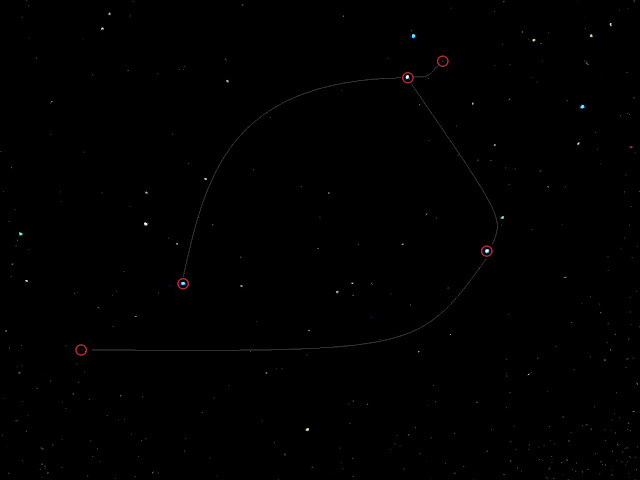 Finding one with enough Star Trek-featured stars to make the map look anything more than sparse, is quite time consuming.  The one above of the constellations Leo, Canis Minor, and Gemini has quite a nice selection.
Anti-clockwise from bottom left are: Wolf 359 (Leo), Procyon (Canis Minor), Pollux & Propus (Gemini), and Regulus (back to Leo).

The one below, however, should be much more recognisable. 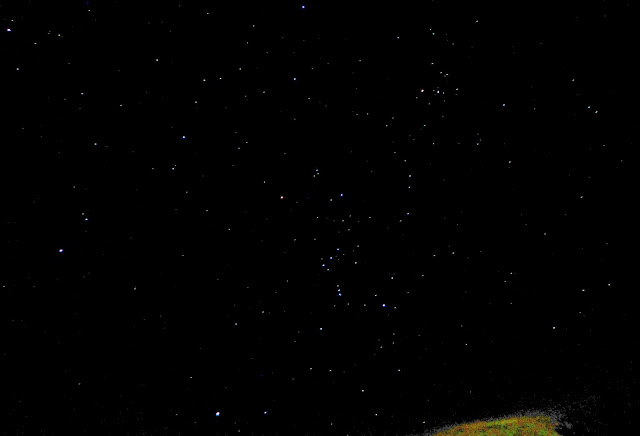 This one features Orion the Hunter in centre stage surrounded by Canis Major, Eridanus, Taurus, Gemini, and Canis Minor.
Orion plays host to quite a few Star Trek locations, but in this map I only really had room for Coridan, Orion, and Mintaka III.  The planet Vulcan, which orbits 40 Eridani A, otherwise known as Omicron² Eridani (I forgot the ² on the map!) or Keid, can be found in the constellation of Eridanus;  Aldebaran III in Taurus;  Iota Geminorum IV, aka the Tribble homeworld, in Gemini;  Andor in Canis Minor;  and Sirius in Canis Major. 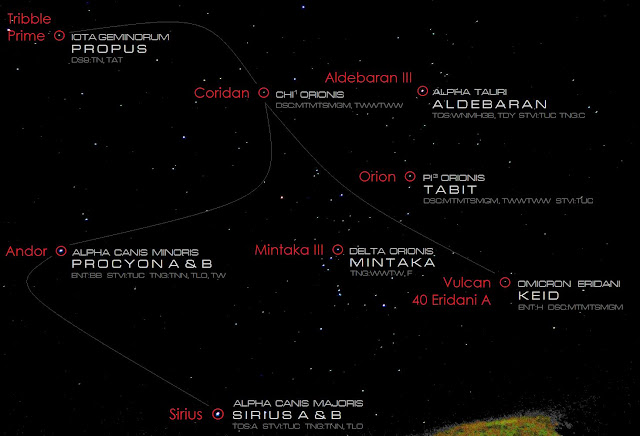 Then I got bored and did this: 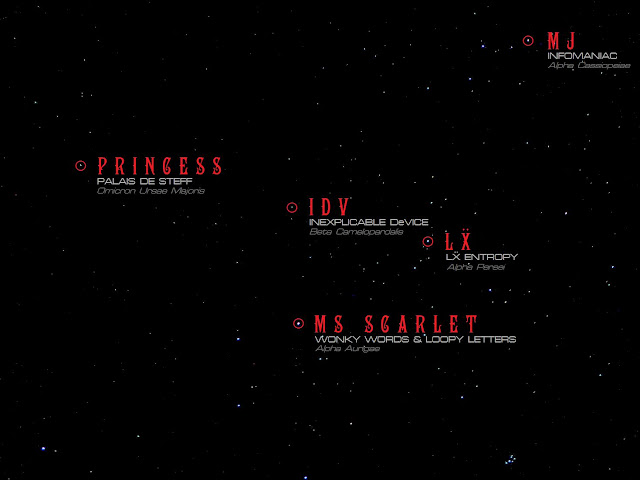 Coven constellation, anyone?  I didn't give the placement of our stars too much thought, and shall probably do a different one with more bloggers on it, but The Very Mistress MJ can be found in Cassiopeia (the upside down queen flashing her knickers!), while I'm floating about in the lanky giraffe, Camelopardalis!

* Such as Futrama which features Omicron Perseii 8, home planet of Lrrr (as pointed out by Eros in one of my previous star-themed posts.

Posted by Inexplicable DeVice at 11:38