Vortex goggles on? Here we go!* 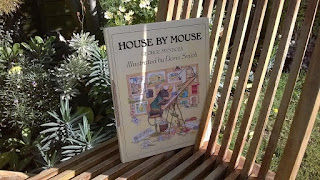 As I don't have anything else prepared at the moment, and it's been nearly two and a half months since the last book post, I thought I'd gracefully alight that bandwagon again.

Yes, if an idea's worth copying once, it's worth copying again!
So, with thanks to Ms Scarlet (the originator of the books on chairs premise if you couldn't be bothered to click on the previous links), may I present:


Books on chairs and other seating conveniences II

Ug. Well, this novel was a chore to get through this time around. Continuing with my re-read of the Star Trek: Deep Space Nine relaunch, Zero Sum Game managed to make one of my favourite DS9 characters - Doctor Bashir - into an whiny, insipid, love-lorn mess. And the object of his affection, the annoying Sarina Douglas, hasn't been written with any qualities (that I can see) to be attractive to the good doctor. I just don't get it? Plus, I'm over the whole espionage/Section 31 malarkey.
This book doesn't deserve to be photographed on a chair even if I did have the time and inclination to do so!

Phew! Back to a decent Trek novel. I'm not going to photograph this one on a chair either - or any of the Star Trek books - because: a) I don't think any of you really care for Star Trek (except Eros, maybe), and: b) I don't have enough different chairs!

Rough Beasts of Empire was also last read back in 2011 (in the second wwwWOW! post).

Taking a break from the DS9 re-read, but still sticking to DS9, Rules of Accusation was delivered to my Kindle on the 4th of July. It's a novella with a Ferengi-centric story that is the latest installment in the ongoing DS9 story arc (set late in the year 2385). When the Rules of Acquisition Sacred Scroll is discovered to be a fake, Quark, Rom, Odo, Zek, Ishka and co. try to unravel the mystery and locate the original.
This was a quick, fun read that felt like one of DS9's amusing standalone episodes.

Ah. One of my favourite childhood books! House by Mouse was found by a friend in our bookcase amongst gardening and recipe books, so it was the perfect opportunity to give it another read. Well, I say "read" - it's more of a picture book with accompanying text.
It's about Henrietta Mouse, an architect, and the homes she designs for various animals. I like Cat's Japanese-style house, and Squirrel's treehouse, but Henrietta's own house is my favourite.
My copy has been annotated in felt-tipped pen by a seven-year old Inexcuseable with critiques of each house: "nice nice home", she had to say about Squirrel's house; and "not a nice home" for Owl's tower-top home. Not a page has been left unruined by her!

More of the DS9 re-read. Deep Space Nine blows up at the end of this one...

... and is replaced by a brand spanking new space station in this one!

As I said back here "Una McCormack can do no wrong! She is my favourite 'Trek author at the moment, having penned my very favourite Star Trek novels; The Never Ending Sacrifice, Brinkmanship, and The Crimson Shadow".
Even though I've read it before, Brinkmanship had me on the edge of my seat in places. The suspense in the stand-off between the Cardassians and the Tzenkethi (a race mentioned but not seen in the TV show, and realised with depth and understanding by McCormack) is skillfully written, as is the delightful friendship between "Mayazan" (a Cardassian spy) and Corazame (a simple, lower echelon Tzenkethi girl), and their ensuing dramas in trying to throw off the attentions of "Hertome" (a Federation spy) and get Mayazan to her pick-up point to return to Cardassia. This novel is also a starring vehicle for Doctor Beverly Crusher (who I believe is seriously underused elsewhere), Ravel Dygan, an adorably hot Cardassian officer serving aboard the Enterprise as part of an officer exchange program, and Ezri Dax, captain of the USS Aventine (formerly a counsellor, then command officer on Deep Space 9 before it blew up).

I started to read Revelation and Dust, but was just sick-to-the-back-teeth of Star Trek (I know!), so I picked up The Days Are Just Packed instead! And, as ever, Calvin and Hobbes never fail to amuse and amaze me.
While poring through this collection, though, I found myself wondering about the layout and furniture in Calvin's house. This is something I've lightly pondered before, as the house either contains an inordinate number of chairs and sofas/settees, or Calvin's Mum (I suppose I should really say "Mom" as this is American?) and/or Dad like to re-upholster and rearrange their seating conveniences.
Hmmm... Perhaps I should do some research and come back with another blog post on this very subject? 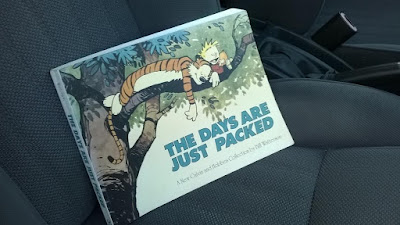 Posted by Inexplicable DeVice at 11:10

Labels: Blogorati, Books, Car, Castle DeVice, Crush, I We Me Us, Relativity, Star Trek, Triffids and such