Please leave a message after the beep

I expect you all want to know the reason for my temporary absence?

OK. Then, I expect a very few of you are feigning mild curiousity but in reality couldn't give two figs.

All I can say is that manoeuvering with The Undead is very time consuming. Not least because we had to keep stopping every so often to pick up bits of Dead Flesh, rebandage Mummy after he became caught up on practically everything with an edge, and remember to look for Non-Existant Boy when he wandered off on his own.

Here we are almost ready to go out one night: 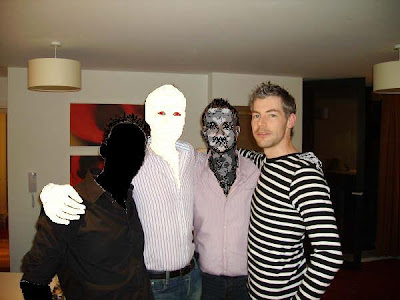 And, no, you don't need to say it. I've told them I don't know how many times, that putting on a shirt doesn't mean they'll blend in!

Posted by Inexplicable DeVice at 11:52

Labels: Holidays, I We Me Us