Gear up for blow up

"Airflow at 98%. Heartbeat on overdrive."

"Gear up spleen for venting."

"Lung capacity at maximum. All airways cleared and ready for action." 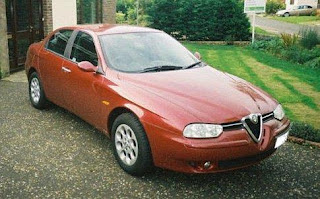 Car had slipped into a coma - its battery power had dropped to near terminal levels. Consequeyntely, it wouldn't start. And I'm supposed to be going to London tomorrow. Ealing, to be precise, to see one of my best friends. Typically, Witchface has 'popped out' - gone to haunt TGOC Future's I shouldn't wonder - so I can't just hex the battery into life. All the hexes are still stored in my/our brain, it's just that IDV's filing system is a little haphazard, and I don't want to accidently use the wrong one. I mean, how is one supposed to get to london on a space hopper? Well, within three hours, that is.
The thought of getting a train (or trains and buses) made my blood run cold, so I enlisted the assistance of my neighbour, who is 'good with cars'. After rummaging through his less than tidy garage, we came upon two sets of jump leads. After much clacking together of the crocodile-jaw-bits at the ends, after the other ends had been connected to his car's battery, we discovered that none of them worked. Drat.
He then said he'd have to tow Car so I could release the clutch and start it. After much wailing and gnashing of teeth (and only a little hair being pulled out - mine, not his as he's bald) - because new cars shouldn't be push/pull started because of the danger of the catalytic converter being damaged by petrol or somesuch - I agreed to the procedure. Well, I was desperate!
Somewhat ignominously, Car was tied to the back of my neighbour's crappy old Nissan Sunny and towed down the road. I let the clutch out slowly.
Nothing happened.
Then I realised I hadn't turned the key. Oops!
I turned the key and let the clutch out again. Car roared spluttered into consciousness. Yaayyy! I took Car for a spin - well, more like a marathon - along Norwich's southern bypass. Twice. Then stopped at Sainsbury's for some essentials (read: pizza & wine). Luckily, Car started perfectly in Sainsbury's car park and is now parked outside my house, conserving its energy - I hope - for starting up again tomorrow.

Posted by Inexplicable DeVice at 21:35

Labels: Car, I We Me Us, Swearing