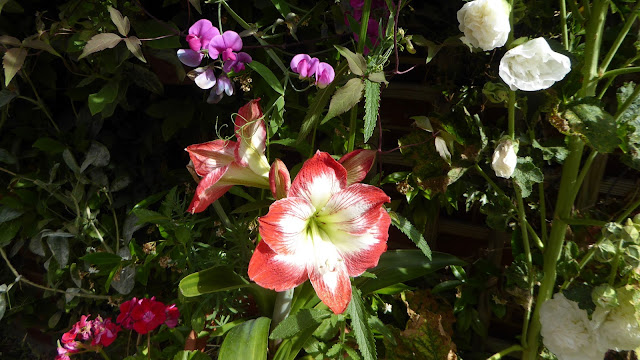 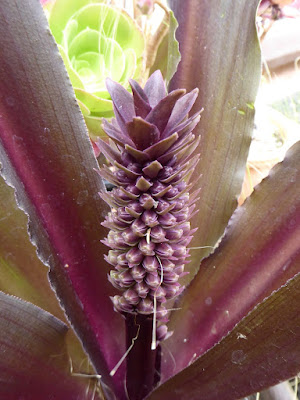 Hello!  I thought I'd better pop in as it's been a couple of weeks since I last surfaced.  I don't have very much to say for myself, but I do have some photos from the gardens here at Hexenhäusli Device.

Above is the second showing from that Hippeastrum in last month's Of Hawkmoths and Drag Queen Knock-Offs (you can see the first set of blooms in the photo below).

To the right, the first little 'pineapples' of my Pineapple Lilies (Eucomis comosa 'Sparkling Burgundy') sprouted earlier this month.

And below, rocketing up in front of the jasmine, clematis, and permanent pea (everlasting sweet pea), is a double white hollyhock (sourced from Delargo Seeds back in 2021).  I sowed it and its many siblings last year (along with some other seeds - as seen here), and while most found their way to a border at the side of the house and flowered that year, this one was a spare that I tucked in beneath the trellis next to the paysho.  It didn't seem to do very well then, but it was obviously establishing itself ready for this year. 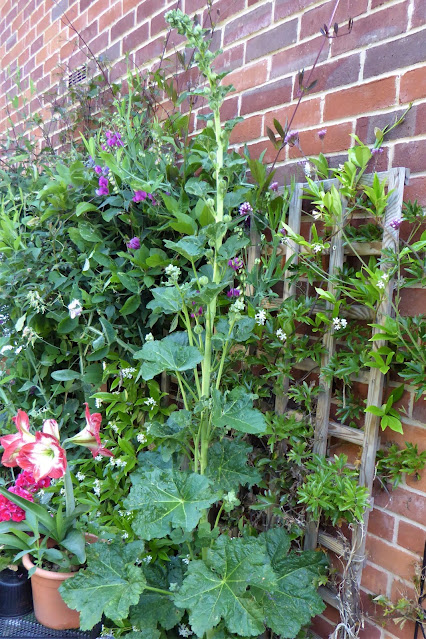 This was taken on 2nd July.
The hollyhock is now even taller at just over three metres (that's nearly 10 feet) 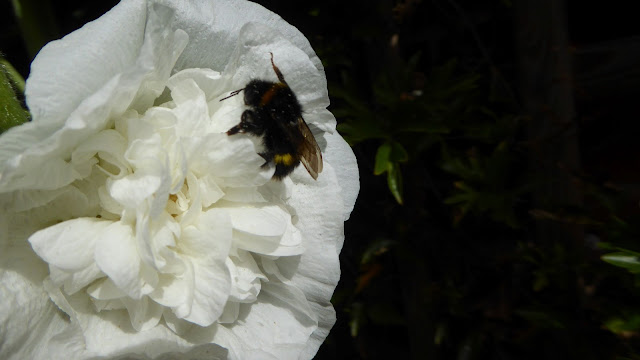 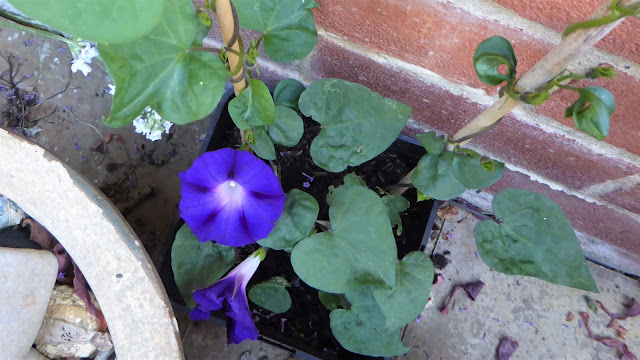 The second generation of Kniola's Black (Ipomoea purpurea) - the first generation was also from Delargo Seeds last year.  These are three self sown seedlings I rescued from that bottlebrush plant (back here).  I've noticed there are loads more under the hollyhock, but I don't know if they'll amount to much as it's probably too shady under there for them. 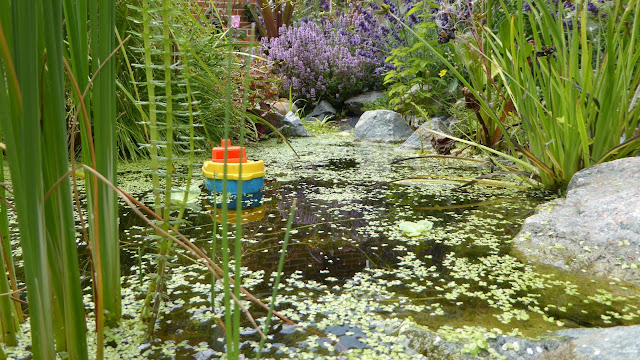 Fancy a cruise around the lake?

With the exception of 'Blacky' (my favourite) bookending this selection,
I have no idea what these Fuchsias are called 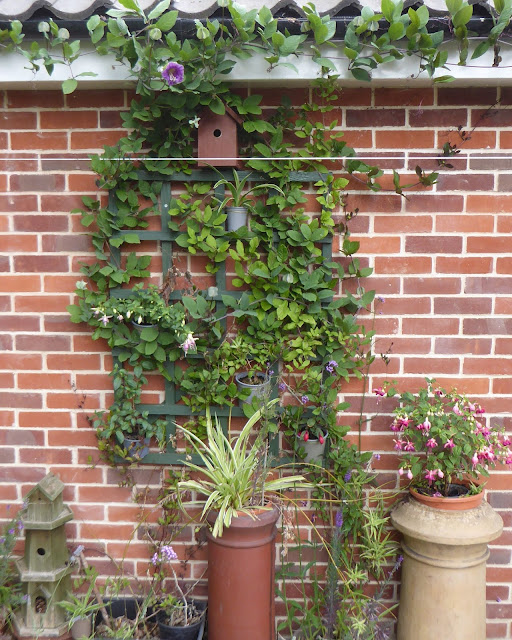 Amongst the Cathedral Bells / Cup-and-Saucer Vine (Cobaea scandens)
growing up this old gate, I've tied in some Fuchsias and Spider plants. 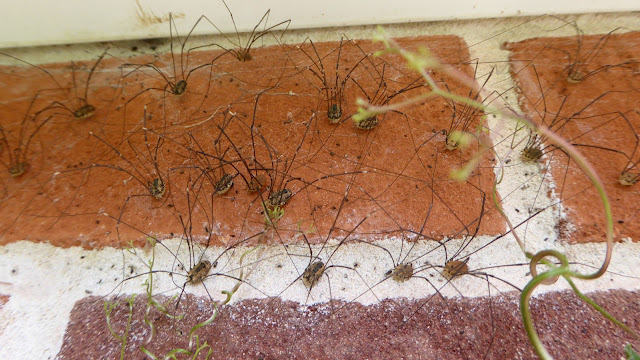 And above the gate under the garage eaves these unspeakable eldritch horrors lurk! 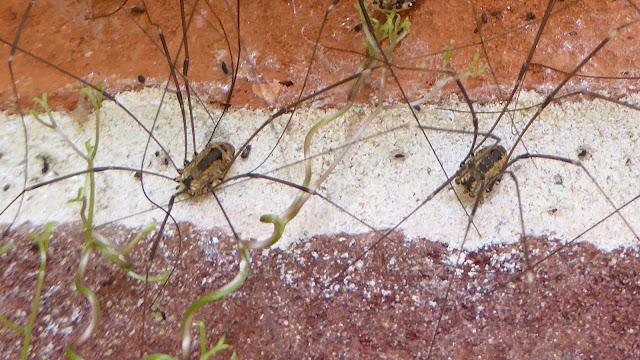 Eeuuch!  They're hideous!  One of the few creatures that I'd happily squish without a second thought if they came near me.
(Despite looking - and moving - like something from the Dungeon Dimensions, these repulsive things are harmless common harvestmen, Phalangium opilio) 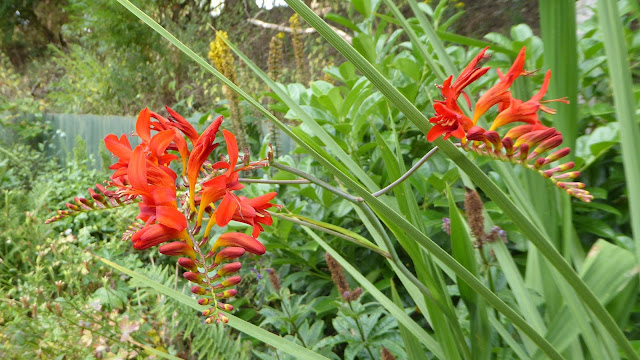 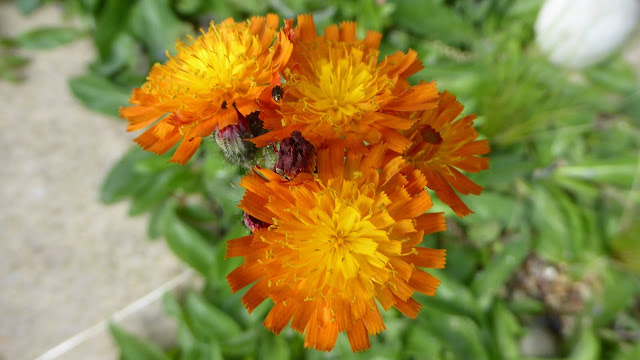 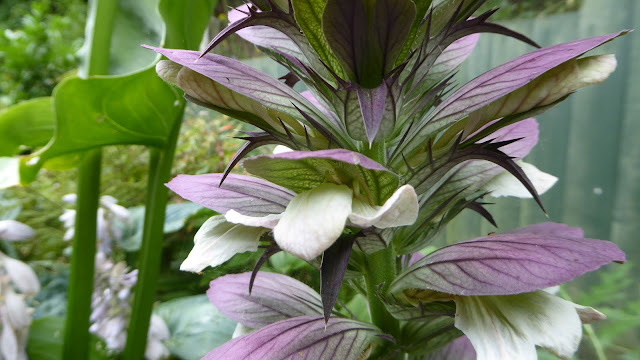 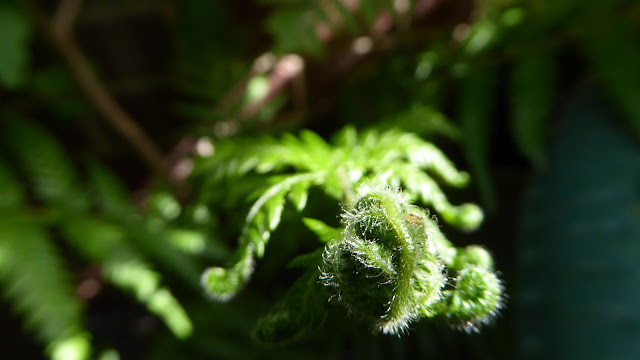 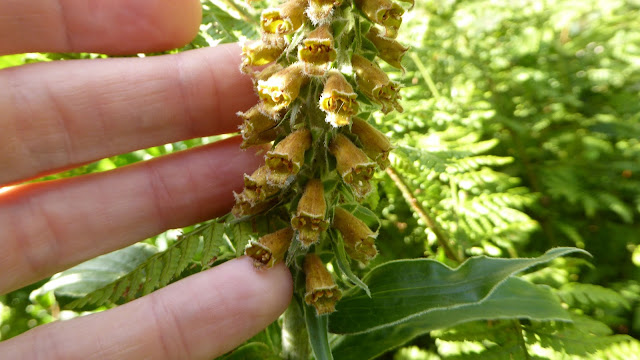 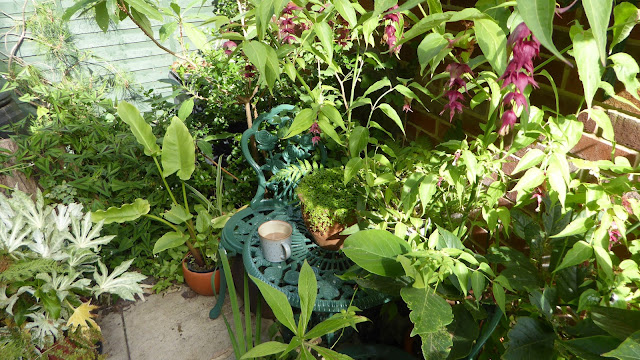 My G&T Corner - although, as you can see, it serves as a coffee corner when etiquette and decorum states it's too early for alcohol...

Posted by Inexplicable DeVice at 12:00

Labels: Boats, DeVice Mansion, I We Me Us, Triffids and such, Wildlife