* Which could never be confused with Ms Scarlet's Big Pink Bush™

Prompted by Mr Tonking's recent seed spreading effort and Dinah taunting Us with her bat (also, to a lesser extent, Jon's pricking out) I bring you the first reminder (following February's general announcement) to get gardening and to photograph evidence of your efforts ready for:

As with the last couple of years, this year's event will be held in November and will follow straight on from the now traditional Hallowe'en prelude, Terrifying Triffidery.  There is no theme for the main event but, inspired by a comment from Dinah, I would like you to search out old photos of gardens you tended - or even played in as a child - from years/decades/aeons ago and send in one or two (or more, if you feel so inclined) to be featured along with your efforts from this year.  Remember to provide captions and/or blurbs to go with your photos, too!

Right.  Now that's out of the way, here's how the Hexenhäusli Device Gardens are coming along: 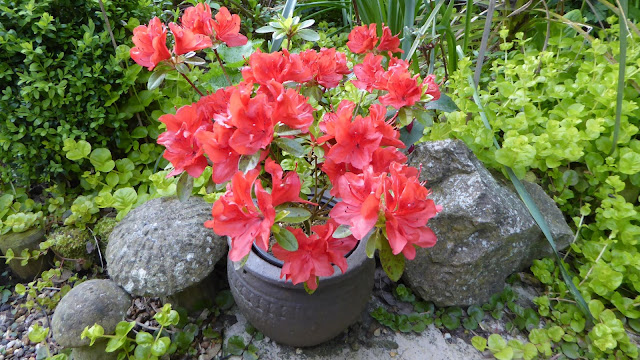 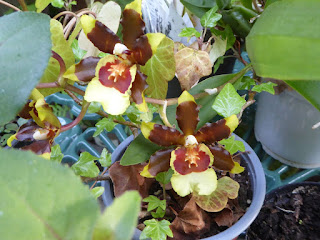 Above is the titular Small Red Bush (which was a free gift with last year's two bat flower rhizomes which came to naught.  Bah!).  And to the left, an orchid (that first featured here) that until recently was positioned on my bathroom windowsill, but once it flowers it drips sticky nectar/sap everywhere so it's now outside in my Gin Time Corner.  You can see it festooning a stem of a Himalayan Honeysuckle below. 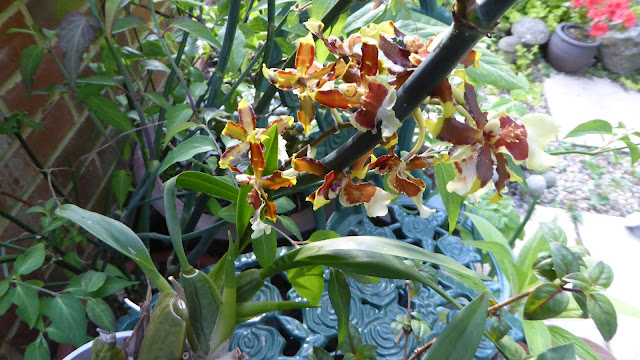 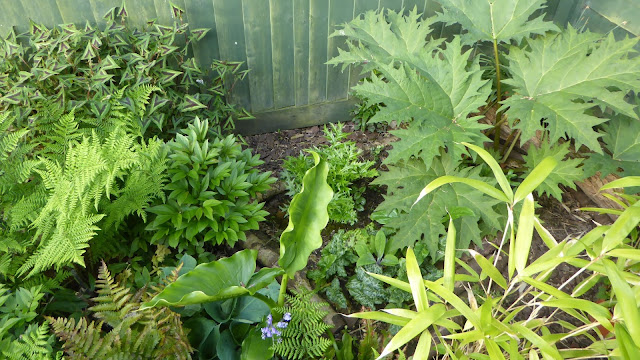 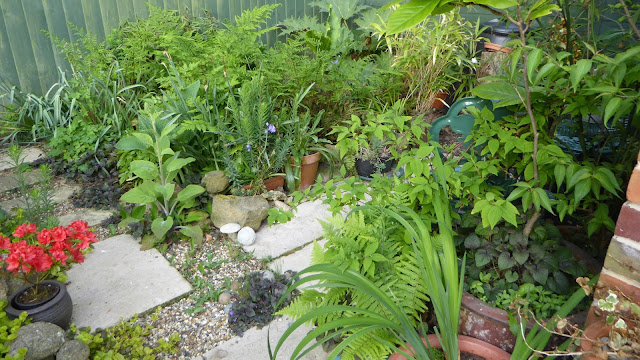 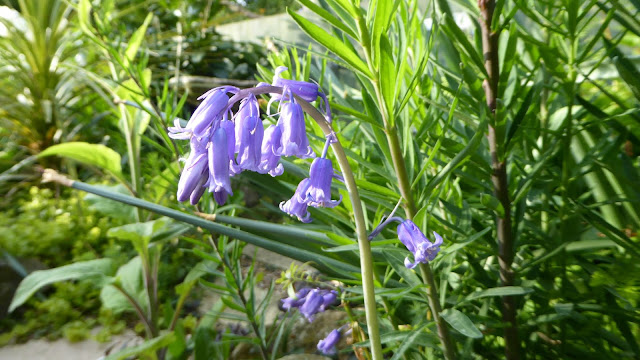 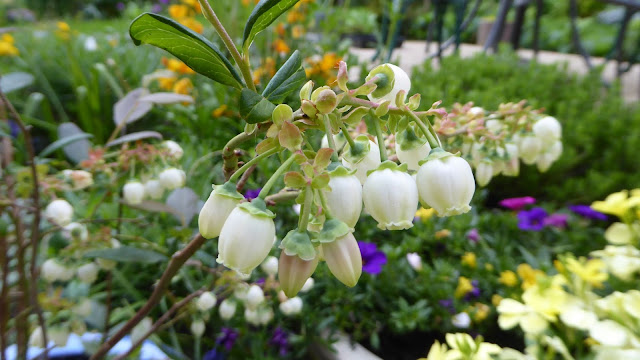 More blue.  Blueberries, to be precise - well, they will be later in the season 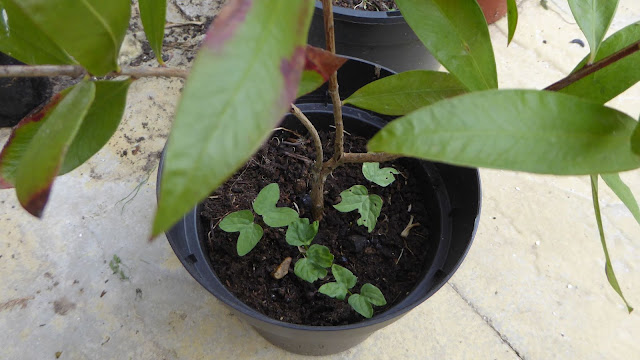 I discovered these Ipomoea purpurea "Kniola's Black" seedlings growing with a bottlebrush plant (Callistemon citrinus "Splendens") cutting the other day.  The seeds must have fallen into the pot from the dead/dying plants last autumn and the recent warm, sunny weather caused them to germinate.  I'll pot them up later. 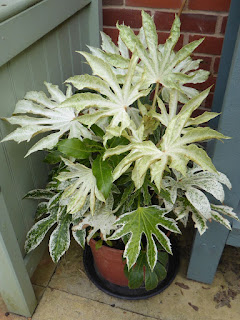 On the left here is the Fatsia japonica "Spiderweb" that I bought last year.  It was going to go in my shade garden, but would have been swamped by the ornamental rhubarb (which I was going to get rid of, but didn't), so it's been languishing between the arbour and potting station.  Still, it seems to be doing okay (I did put it in a bigger pot).

And now, the rest of the garden which was put together by and is mostly tended to by The Parents.  When they've gone, I'll make some big changes, but for now I just let them get on with it (except for when I get roped in to do the heavy lifting etc.) and dabble in some surreptitious titivating (i.e. stealth gardening). 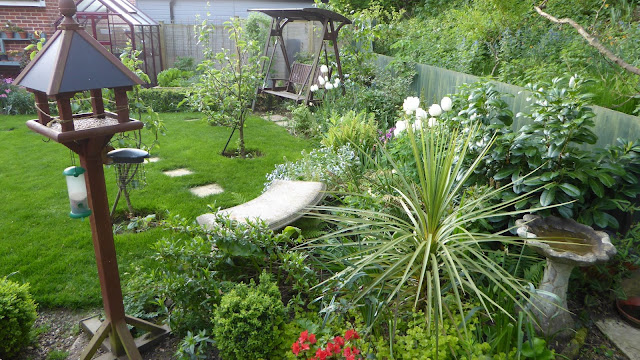 The view from my shade garden behind the garage 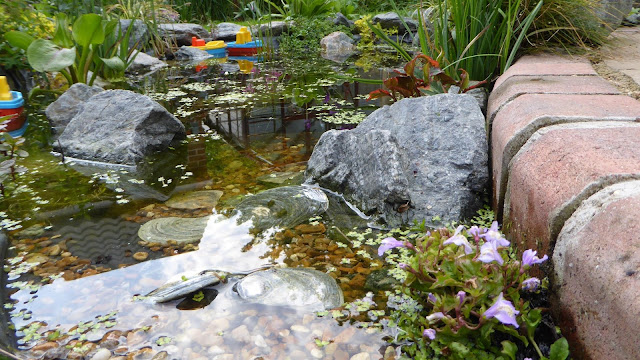 The pond, repleat with Count Podgkinson's boats,
and Vom Smallhäusen's oyster shell tadpole "homes"
(which actually work - several tadpoles can usually be found under each shell) 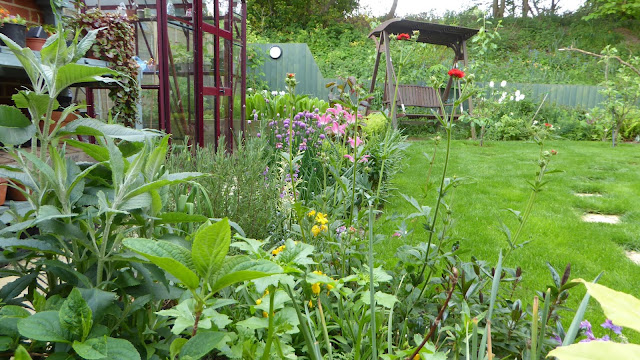 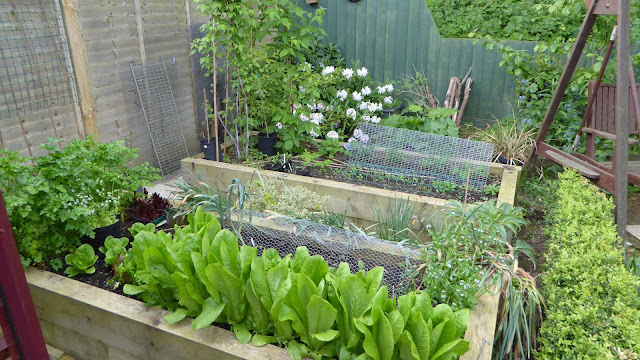 The raised beds behind the red greenhouse.
Salad in one, raspberries and potatoes in the other 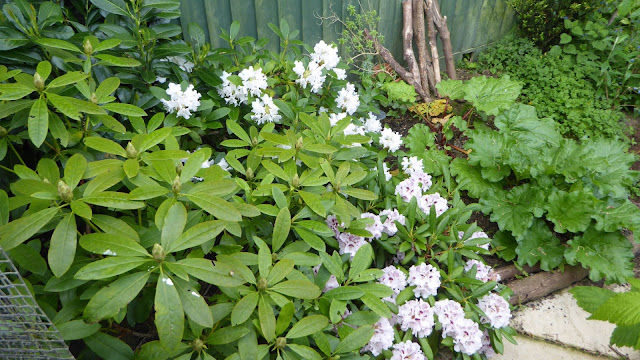 And behind the raised beds, Rhododendron Corner (which does include some rhubarb) 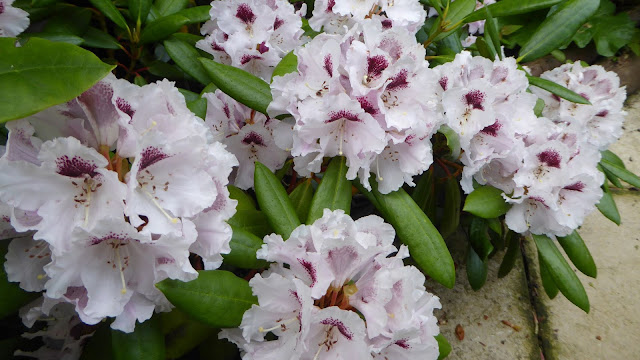 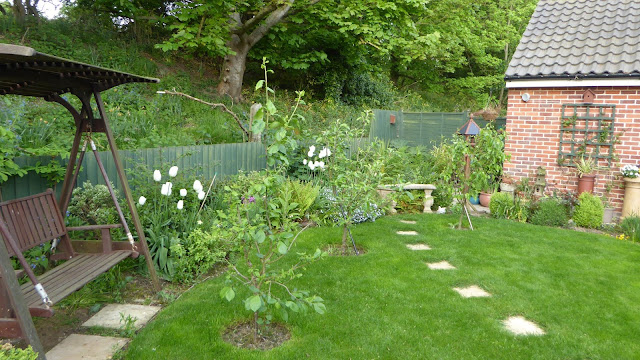 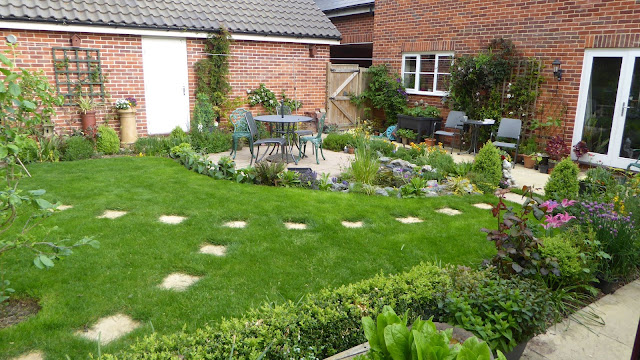 And back to the paysho and pond 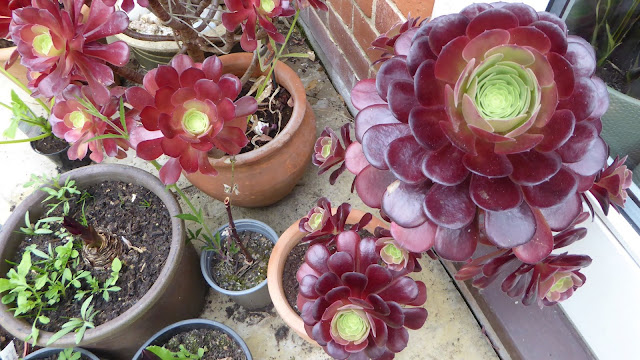 Aeonium "Schwarzkopf" and various seedlings which germinated from the compost heap compost I used to repot my Pineapple lilies.  I can make out a few tomatoes which I'll probably pot on, but I'm waiting for the others to get a bit bigger in the hopes that I might be able to identify them
(and then decide whether to keep them or return them to the compost heap).

And finally, back to the Garden Photos Event - and for anyone who hasn't a clue what We're going on about, click here for a little history (as well as further information and links).  Remember, this year there are three things I'd love for you to submit photos (with captions/blurbs) of: a Terrifying Triffid - a photo of a plant taken from an odd angle/closeup/while drunk for the Hallowe'en prelude; photos of your current garden/courtyard/balcony/windowbox/house plant/salad drawer from this year for the main event; and a photo or two of a previous garden (or your current garden from years ago) for the special Gardens Past exhibit.