CCQ: Aidan Turner in the Altogether with a Towel 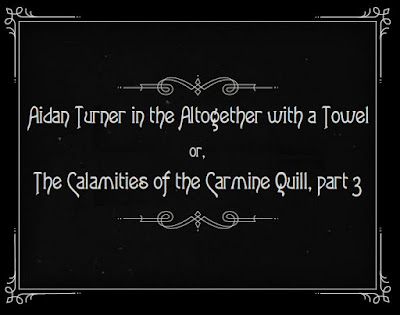 "Wow!  You really know how to handle such a big machine" IDV shamelessly innuendoed at Asriel as the driver swung the limo into Mitzi's driveway and brought it to a controlled stop outside the front door.
"Oh, dear.  That was terrible!  The poor boy" Lady Goldberg-DeWoofs admonished as a furious blush bloomed on Asriel's handsome face.
"I don't know?" Maddie countered.  "I might have said something similar."
"Thank you, Maddie" IDV said.  "I'm rather out of practice.  Now, we'd better go and see what's going on inside."
Despite the blatant flirting, Asriel had managed to get out of the limo and open the rear door for his passengers to disembark.  IDV had only just got out - not missing the opportunity to give the driver a once-over - when a minibus roared up the drive and screeched to a halt mere micromips from smushing his legs to smithereens against the limo's open door.
Hmm...  That sounds familiar.
Yes, 'Ms Scarlet with the Trolley on the Mezzanine' familiar...
Sshhhh!  Just let him get on with it otherwise we'll be here all day!
"Eeeeeeep!"
"Where is she?!?" Jon barely noticed IDV sandwiched between the front of the minibus and the car door as he burst out of the vehicle.

"Oof" said Dinah as she gracefully fell out after Jon.  A small avalanche of empty wine bottles followed in her wake, clinking and clanking around her.  A raised eyebrow from the limo driver (the resident expert) provoked a defensive mumble "They're for Ms Scarlet's Bottled Project..."
"Sorry to startle you, IDV" Mago said as he exited the driver's side with an exasperated expression on his face.  "I was getting inundated with directions und instructions und pointing fingers..."
As IDV sidled out of the wafer-thin gap, his mouth open to respond to Mago, a terrible scream rent the air.
"I think it came from around the back" Maddie gasped.
"Then let's go!" cried Jon as he leapt into action.  Well, sashayed towards the side gate, anyway...
oOo
A couple of minutes earlier, inside...
"It's not one of mine" said Mitzi as she eyed the strange plant suspiciously.  "Maybe my maid of all work bought it?  Carmen!!?"
Ms Scarlet jumped at the sudden bellow, then, once she'd calmed a little, said "Maybe?  But it looks rather familiar."
Before either of them could do or say anything else, a couple of thick, vine-like tendrils uncoiled from the plant and slithered towards them.
"Fuck me!"
"That's just what I was going to say!" Ms Scarlet said as they dodged around the kitchen island and ran for the french doors.  After scrabbling at the lock for what seemed like an eternity, the two of them burst out of the doors and onto the lānai just as Houndwort's grasping tendrils reached their position.
"Bugger" Hound muttered as he grasped empty air. "Wait up, Bab!  I only want to-  Oof!"
"Got 'im!" Mitzi crowed brandishing a rake, but her triumph was short-lived as a tendril grabbed the rake out of her hands and flung it across the garden.  "Oh."

"If only Poldark were here with his massive scythe" Ms Scarlet puffed as she dragged herself through Mitzi's hedge (not a euphemism) then ran out into the garden, but not as fast as she normally would have done due to the wind resistance from her massive 'do.  Which was just as well really, as had she been going any quicker she wouldn't've been able to stop and would have toppled over the edge of the cliff!
"Aaaaiiiiieeeeee!!!" she screamed in terror as she teetered on the cliff top.  "I didn't know you lived on the coast, Mitzi?"
"Neither did I?!" said Mitzi forgetting her Received Pronunciation again as she pulled Ms Scarlet back from the edge. "What the frig is going on?  And where's that jingling noise coming from?"
"Oh, crap" Ms Scarlet cursed.  Houndwort had cornered them.  "Where's Aidan when I need him?!"
"People do frequently tell me I remind them of Aidan Turner, as a matter of fact" the quivering mass of greenery said.
"You what!? Mitzi wasn't having any of it.  "Pull the other one!"
"Okay, Hound, let’s see some pics!" Ms Scarlet challenged him.  "IN A TOWEL!"

With a grunt and a lot of ruffled leaves, Houndwort transformed into a very convincing Aidan Turner clad only in a VERY small flannel.  "What do you think, Bab?"
"Phwooooaar!"  Ms Scarlet hurriedly contained herself.  "I mean, the accent could do with a bit of work.  How did you do that?"
"Well, I am a witch, you know!" he said flailing around with a big scythe.  "IDV's not the only one."
"Oi, mind my flower" Mitzi said with a frown.
"I thought that would have been lopped years ago?" Ms Scarlet whispered out of the corner of her mouth before turning back to 'Aidan'.  "So, what do you want, then?  Why are you chasing me?"
"Oh, yeah.  I nearly forgot.  Your frock is tucked in your knickers - along with something else.  I just wanted to let you know before you became a laughing stock."
"What?!?  Oh, no!  What is it?" Ms Scarlet shrieked as she reached under her white ermine coat and scrabbled around in the vicinity of her derrière.  Her fingers brushed against something velvety yet curiously crispy and jingly.  "Oh, no..." she said as she brought the offending item out into the light of day.
Ah.  Now we're caught up...
A commotion behind them at the side of Mitzi's house got their attention - A pile of Blogorati surged into the garden like a human tsunami, flattening everything in their wake!
Well, they would have done had there been more of them, but IDV's declining readership couldn't stretch to a tsunami, so a moderate swell of five (there would have been seven, but Lady Goldberg-DeWoofs stayed behind to comfort Asriel after IDV's terrible flirting) picked their way carefully around Mitzi's prized specimens (again, not a euphemism) towards Ms Scarlet, Mitzi, and Hound-Aidan.
"Oh, Scheiße!" Mago swore, somehow finding himself at the forefront with a ringside seat view of the item that dangled betwixt Ms Scarlet's dainty fingers.  "Die Freakin' Grüne Elfenshorts?!?"*
Jon looked like he was about to throw up while Dinah grimaced and turned away, then had to turn the other way as she found herself on the receiving end of IDV's sneer of disgust. 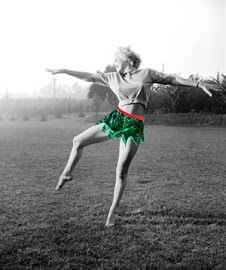 "I didn't realise I had them on me!" Ms Scarlet wailed.  "I was practising for the compo before you all turned up and scuppered my Cake Rescue."
"Well, well, well" Maddie said and waggled her rubber-gloved fingers at Ms Scarlet.  "It seems I'm the only one equipped to deal with them."
"You're welcome to them, Maddie.  Here - catch" and Ms Scarlet threw the 'Shorts towards Mistress Maddie but a gust of wind caught them and they sailed towards the cliff edge.  Fearing for the consequences should the Freakin' Green Elf Shorts get loose, as one the Blogorati ran towards the airborne polyester pests.
"Noooooo!!!" Hound-Aidan shouted  "Not through the hedge!!"  But it was too late, the five of them - including IDV, who should have known better - crashed through the low, in-need-of-a-trim hedge.
oOo
Somewhere else...

"Where are we?"
"Working..." a mechanical female voice answered.  "You are in the aboretum aboard the USS Enterprise."
"Oh, dear..." said Ms Scarlet as she looked down to see what she was wearing.  When she looked back up, she tried to ignore the delighted grin slapped across IDV's face.

Posted by Inexplicable DeVice at 19:08