It's A Faaaake! Not The Art Of Star Trek - Unfinished Business


Despite The Very Mistress's "Suggestions for 2018: Less Star Trek" (from the comments of The Year of the Lunatic Coven Awards), this, only my third post of 2018, is, in fact, Star Trek related.
Yes, it's the first of this year's Not The Art Of Star Trek posts which are just dumping grounds for my monthly art challenge "efforts" over at THE TREK BBS.  And this challenge - December 2017's - was set by me because my Original Character, Svjolweir Ti Meerdoy, won the November challenge!


As my only idea for an Art Challenge - "Design a mentioned but not seen Star Trek alien" - was kind of covered with the entries from November's challenge (including my own), I set to scrabbling through the various art threads here, the themes of the previous challenges, and my note/sketchbook for inspiration. And I found it!

The December Challenge is: Complete a Star Trek themed piece of art work that you've started but not finished.


My note/sketchbook is full of unrealised designs, and I know some of you will have unfinished work from previous challenges judging by some of the comments. Or, if you are one of those people that always finish what you start (your self discipline and time management make me sick!), perhaps you had some other ideas that you abandoned in favour of your finished art?
This is the ideal opportunity to finish something that's been tickling the back of your mind, or full on bugging you, before the end of the year. You can enter 2018 with a clear head - fresh for new challenges!


Conditions: You can only finish something that you have not worked on for a month or more. So, if you had an idea for November's challenge, but didn't get around to finishing it, you can't complete it for this challenge. But, any previous months/years are fair game.
And your final entry should include the original piece of work as it appeared when it was abandoned, languishing in unfinished purgatory, lost amongst the pressing weight of ideas new...


As always, you have until the end of the month - 31st December - to complete your Unfinished Business! Good luck!

Despite not starting work on December's art challenge until the morning of Saturday the 30th, I thought I'd have plenty of time to finish something unfinished. I didn't reckon on The Invasion of The Time Snatchers (AKA my nieces The Little Witch and Grumplestiltskin) not fifteen minutes after I'd sat down to get to work...
Still, I managed to pick something from the jumble of years-old sketches as illustrated below, and started some colouring in! 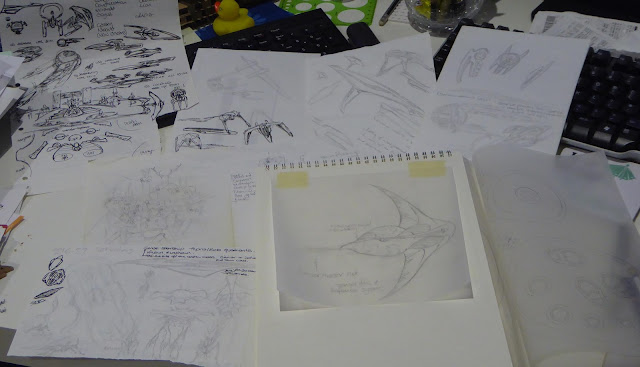 And that lot above is not even the half of it! I've got two box files full of sketches and drawings and half realised designs going back to the late 90s, and the select few pictured up there came out of the first quarter of one file! I also found a few bits and pieces (the sketch pad in which that nautilus starship features) in one of my old art school portfolios. The urge to procrastinate and sift through every single scrap of paper in those files and folders was (and still is) almost overwhelming! 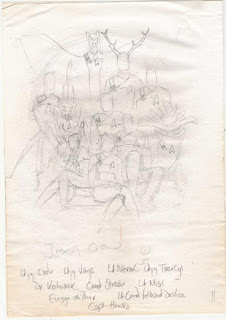 On the right is my unfinished business: the original sketch (from many, many years ago) of the diverse crew of a Starfleet communications vessel. Although, those antlers weren't on the original - I think I added those a couple of years ago along with defining some of the lines, ranks, commbadges etc.

At the behest of Scribble and my own creeping sense of panic due to the time lost with the "Obligations" - watching Paw Patrol (Mayor Goodway and Chickaletta are hilarious), playing with the dolls' house, and other small child-related things - I extended the deadline by a day to Monday 1st January.
Also, in an effort to squeeze in a little more time - if my map reading and time zoning were correct - I clarified that "midnight" should be the last instance of midnight on the 1st:  One of the last places on Earth that it's midnight, are the Baker Islands in the South Pacific (UTC -12).

I re-sketched the crew sitting around on whatever it is they're sitting on (lazy lot!), then added some colour with watercolour pencil crayons, blended the colour with a bit of water, then outlined them with a fine line pen.

As you can see in the finished image below, I changed the name of the ship from Straxus (named after the cool, but evil, axe-wielding Decepticon commander of Polyhex), to Rosecrypt (named after a communications encryption invented by Uhura in the novel The Pandora Principle). The uniforms are redesigns of those 80s-looking civilian/science outfits featured in TNG: "Time's Arrow" and "Realm of Fear".
As for their lack of humanoid faces: don't worry, I haven't gone all Charlie X on them - I'm just hopeless at faces, so I didn't even attempt them! 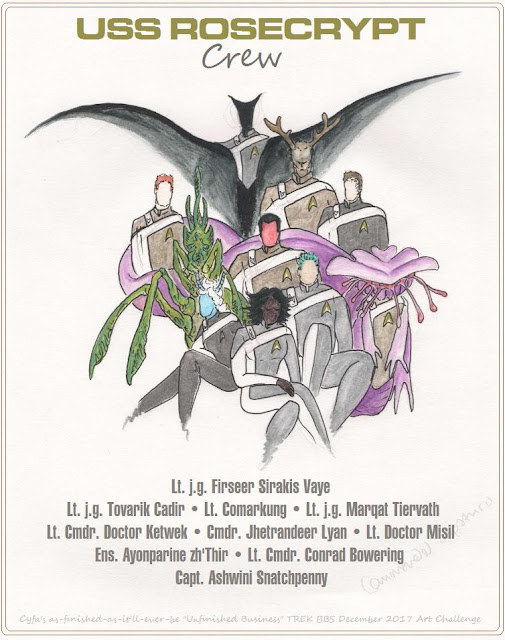 And, finally, this is my entry showing the original unfinished sketch along with the finished article: 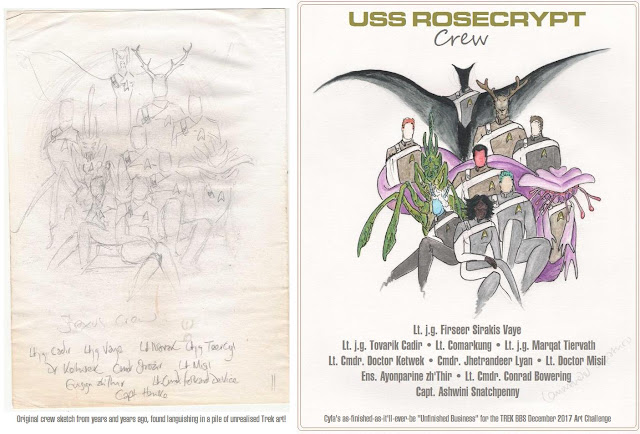 
Posted by Inexplicable DeVice at 13:33

Labels: Canvas, I We Me Us, Relativity, Star Trek