In Space, No One Can Hear You Peep* 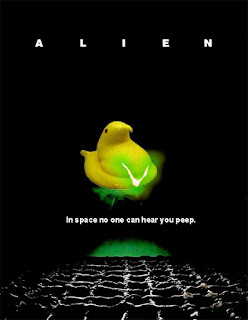 "LẌ?  What was that noise?"
LẌ ignored his myrmidon and hoped that the noise wasn't caused by the Peeps escaping from their cardboard prison.
"Und haven't we already passed that globular cluster?"
"Have we?" [worried]
"I'm positive."  Mago peered out of the porthole at the spherical group of old red stars.  "Where are we?"
"I don't know?  Aren't you looking at the map?"
"What?!  Nein.  I thought you were flying this thing?"
"Damn it, Mago!  I'm the Official Infomaniac Pillow Fluffer and Personal IT Consultant to Mistress MJ, not an interstellar navigator!"

Mago put down his book and looked over his reading glasses at his co-pilot, his magnificent brain ticking away.
"LẌ?"
"Yes?"
"Why are we in the cockpit of a spaceship?" he asked in the manner of a psychiatrist to his patient.
"Umm..."
"Und, why are you dressed as some sort of medieval space-knight?"
LẌ momentarily looked blank, then the dawn of realisation slowly spread across his face, his left ear glowing red-pink as if the sun were shining behind it.
"Codfanglers!  It's "a friend's" birthday today."
"Ja, I already gave you your present."
"No.  I mean, I think we're here because it's my birthday.  I mean, "a friend's"."  Mago gave him a look as if to say "continue..."
LẌ glanced down at his outfit and didn't bother to mask the look of scorn that was victorious in the battle for his face, seeing off the last of the realisation.
"We're in a spaceship, wearing ridiculous outfits - Yes, you, too" he said as Mago looked down at his own ill-thought through space myrmidon garb.  "Flying God knows where, and with no recollection of how we got here!  We're clearly over The Cusp.  Which means this is IDV's doing."
"Ah, the birthday post!"  The realisation, having retreated from LẌ under a barrage of arrows of scorn, trudged over Mago's jaw and set up camp slap-bang in the middle of his face.  "But, what are we supposed to be doing?"
"I don't know?" LẌ replied as he rifled through the glovebox and behind the sun-visors.  "It doesn't look like IDV left any instructions!"
"Most peculiar."
"Not really.  IDV is a terror for leaving things to the last minute and expecting everyone to know what's going on.  You know this!"
"Yes, but after the Space Shuttle calamity on Princess's birthday, and that flying saucer idiocy three or four years ago - in both of which you were piloting - I'm just surprised that you've been left at the wheel of yet another spacecraft without a flight manual.  Or any instructions whatsoever?!"
"Shut up." In a small but tastefully appointed cabin a little close to the bowels of the ship for comfort, two sleek felinoids** lounged on opposite ends of a heating unit.

"What did you get him?" the first asked before licking her paw and drawing it elegantly across her face.
"I left him half a Cardassian vole on his pillow for breakfast-in-bed, but he must have been late for his shift as he didn't have time to eat it.  What about you?"
"Oh, I warmed his slipper for him."
"That's nice."
"I thought so.  If you've still got that half a vole, can I have it?  I should be able to get it through my digestive system in time to leave something in his other slipper to keep that one warm for when he gets in."

* Post title and Peep poster by LẌ
** Lola and Nikko appearance with kind permission of Lola & Nikko Inc.
*** Possibly not until March

Posted by Inexplicable DeVice at 06:00