And they were scalded to death*

I know it's only been a few days since the anniversary, but we've been remarkably busy with work and socialising

Yes. I know!
So, I'll leave you with the Host's latest "books read so far this year" update. While you're looking at or ignoring this, I'll do something about answering the comments in the last post and will also have a flit around your blogs, too.

See you out there!

This book post is a bit Star Trekky this month, plus there are rather more books here than in the normal book posts, but that's because we didn't publish a book post back in September what with all the Tin Foil Hat rigmarole.
Anyway, on with the show:

43. Stories To Tell To Children, by Sara Cone Bryant

This charming little book was first published over one hundred years ago in 1911. And the edition that I read (pictured on the right) was reprinted in October 1947 - I found it in The Parents' bookcase while packing things up in preparation for decorating.
I must say, I was rather surprised by the amount of animal characters whose lives came to a sudden, and rather casual and callous end. I suppose, in that respect, some of these stories are much like the original fairy tales (which were warnings rather than sweet little tales to tell to children).

* Post title from "Another Little Red Hen" on page 86.

I had this novella on my Kindle, but I couldn't remember reading it, so thought I'd give it another go.
It rather nicely introduces us to the space station and some of the crew of the Star Trek series: Vanguard.

Another novella, but this one I do remember reading before. However, as I remembered it being rather good, and as Timmy-love wrote it, I decided to read it again.
Tim does an excellent job of bringing the characters of this small town to life. Well, except for the one who is dead, of course! My brain barely had to work at all - the town and the people seemed to arrive in my head, fully formed and whole. This is a nice, easy, whodunnit-type tale, and one that I recommend despite not normally going for this type of thing (and not just because I know the author).

** Not that close, unfortunately. 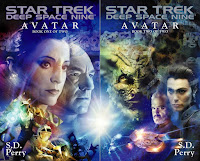 I've been meaning to re-read the continuation of the Deep Space Nine series for a while now, and, at last, I have made a start with books one and two of Avatar.
It's been about 14 years since I last read it (really?), but I still found it fresh and engaging (thank you, faltering memory).

I'd been curious about this book since it first came out, and eventually succumbed to buying it for my Kindle.
It started off promisingly enough (with the death of a redshirt, naturally), but just when I wondered how these characters were going to survive, the story turned rather meta which was totally unexpected. It was really well done, and made perfect sense to me, but I was looking forward to something a little more grounded.
This book also has some rather interesting codas.

Continuing the Deep Space Nine story after Avatar, this book has a Dr Bashir-centric A-story (with Dax and Ro along for the ride), with a satisfying Kira B-story.

This book is part of the Gateways mini-series that links together all Star Trek series' but it's still a rather good Quark-&-Ro, and Kira-&-Taran'Atar story that leads on from Abyss.
I haven't read the other Gateways books, but to be honest, I couldn't give two figs for the Iconians gateways, and don't particularly rate the other authors who contributed to the series.

This is a brand new Titan tale from one of my favourite Trek authors, so I couldn't possibly not get it and read it straight away!
Mr Swallow didn't disappoint: What an amazing read! I couldn't put this book (Kindle, rather) down - aside from eating, watching Strictly Come Dancing etc. The main characters voices all came through clearly; there was some good use of supporting and minor characters, interesting new crew; drama; action (that was really breath-holdingly action-y, for want of a better description); intriguing aliens (the Dinac - I want to see more of them in future novels, especially their wooden spaceships!); and the return of the Solanangen-based entities from The Next Generation episode "Schisms". Also, the sacrifice of Titan's Cardassian science officer, Zurin Dakal, had me reeling in disbelief - I kept expecting a last-minute rescue, but it never came. This was a powerfully written bit of drama, particularly Zurin's thoughts leading up to his death, and the reactions of Captain Christine Vale and Zurin's would-be/could've been love interest, Ethan Kyzak.

Posted by Inexplicable DeVice at 09:39

Labels: Blogorati, Books, Crush, I We Me Us, Star Trek