The Baby Sitter From The Black Lagoon*


Another month, another "books read so far" post. And with just two exceptions, all these books listed here are re-reads. I haven't written summaries or info about all of these books as, quite frankly, I can't be bothered. I may come back later and do them.

30. The Amazing Maurice and His Educated Rodents, by Terry Pratchett

As I have been partial to a bit of Terry Pratchett in recent months, when it came to choosing a book to read to while away long journeys or dull dinner hours, another Pratchett novel was a given. But which one?
After some humming and hahing, and a recommendation from someone at work who had just re-read it himself, I selected The Amazing Maurice. As it has been some years since I last read this, and thanks to a poor memory, I couldn't really remember much about the plot and characters. So, it felt like I was reading this anew.
The premise is that an intelligent cat (Maurice) along with his stupid looking kid (Keith, the Piper) promises to rid towns and villages of their rat infestations for a fee. The rat 'infestations' are actually a clan of intelligent rats (Dangerous Beans, Sardines, Peaches, Darktan et al) who travel with Maurice and Keith and pretend to be normal rats when they get to the target town/village. This is the story of what happened when they reach the poor town of Bad Blintz and uncover an ongoing scam orchestrated by a Rat King and some human rat catchers.

31. After the Golden Age, by Carrie Vaughn

Now, I bought this book a year or two ago after reading a review on io9 and, while rifling through my bookcase, found it with a book mark sticking out of it. The mark was quite close to the end of the book, and it got me wondering whether I'd actually finished it. After reading on, I discovered that I hadn't. Oops!
Anyway, I have now, and even skimmed through the first part again to refresh myself of what had happened.
I quite liked it for its viewpoint of the non-powered daughter of two famous superheroes, but I didn't really engage with it. Which is probably why I didn't finish it the first time. 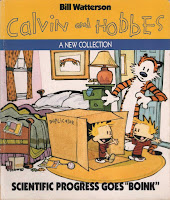 I don't think I need say much about these two Calvin & Hobbes collections, other than to point out the runners up for the honour of Post Title:

"The children are gobbled up like Children McNuggets" - page 15
"Knife wielding mother hacks icthyoid!" - page 46
"Boy, you are a crabby lady! Who are you? Calvin's cruel governess?" - page 56 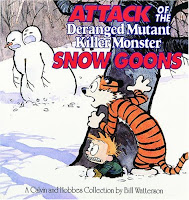 34. Shades of Grey, by Jasper Fforde

This is the first non re-read book I mentioned. After having read Jasper Fforde's Thursday Next series, a work colleague lent me this book about an apparent utopia where race, belief, sexuality etc have all been superceded by colour. People see in only one part of the colour spectrum (red, green, yellow etc) with the rest of the colours seen in shades of grey. They live structured lives and obey the Rules of Munsell. Obviously, its not quite as simple as that, and someone starts questionning their way of life...
It took me a long time to get into this book. Partly because its a big hardback, and therefore not very portable. So, I wasn't carting it back and forth to work - or anywhere else - and only read it in bed. Which meant, at most, I'd read a chapter then fall asleep. The other reason is that I just didn't understand the world the book is set in. I kept thinking I was missing something, always hoping that the next chapter would make everything clear. I was about to give up when I had a day off and nothing to do, so I took the book outside and blasted through chapter after chapter until I reached the end. Finally, everything came together and I 'got' it.
If you're anything like me (you poor sods), and want to read this book, I'd recommend setting aside some time to read big chunks of it all at once.

At last! The follow up to 2013's Revelation and Dust, and 2009's The Soul Key has been written and released! This novel deals with so many dangling plot threads that, typically, it can't resolve everything by the end of the book. We'll have to wait for Ascendance (released early next year) for the resolutions. However, what a fantastic start!

Posted by Inexplicable DeVice at 08:12