Ah, good day, and welcome to the gala opening of this neo-constructionist collection of international chapeaux de tin foil.

Or hastily thrown together crap, in other words.
Actually, some of them look like they went to a lot of effort.
Really? Which ones?

* Ahem * What was I saying? Oh, yes: I would like to present to you, the blogging public, this exclusive collection of objets d'art from the world over: 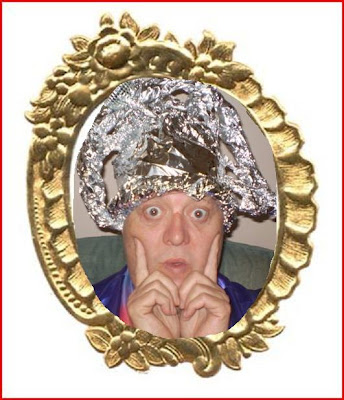 First, we have Princess, modellin- Oh. It looks like she was too busy voguing for the camera to pose properly for whichever houseboy was tasked with capturing her iconic Patsy Stone-esque image. Perhaps we'll move on and come back to her later.

This is more like it. Two examples of metallic hattery by Eroswings, complete with the artist's own tales of inspiration along with the hat's technical specifications: 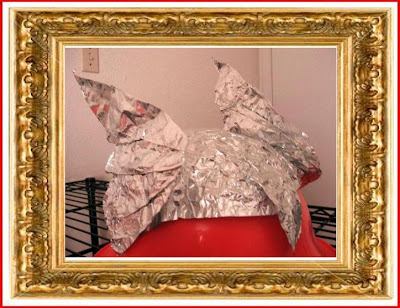 Here's the first one: The tin foil hat wings

This hat was inspired by the winged god Hermes, who a few hours after being born, snuck out of his crib and went to cause mischief to the other gods, before sneaking back in and pretending to be asleep while his mother slept, none the wiser to his antics. This tin foil hat will empower me to sneak out and do mischievous things without the authorities (parental or gov't) knowing what's going on! And it will also repel any alien weapons, transporter, and tractor technologies.
If the aliens want to probe, they're going to have to do it the old fashioned way: using lots of alcohol and paying for dinner! 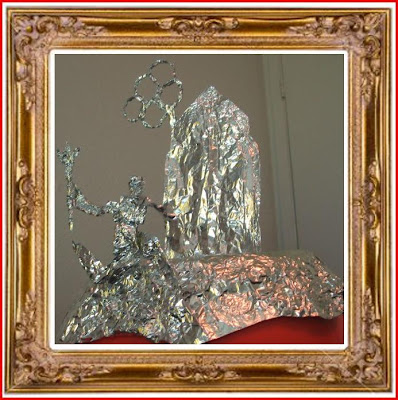 The second hat was the most difficult to create, as it took all of the tin foil in my home to complete! I call it: The tin foil hat London Olympics!

The Olympic rings on the hat broadcasts a signal that starts on the day of the opening ceremony, causing mothers within 100 yards to stop asking children to do chores when the Olympics are on! And the torch bearer will send out a signal during live events to ensure that people watching the games will be provided with snacks! The Big Ben clock tower will shield wearer's true thoughts, by radiating a continuous signal that makes scanners see only happy Olympic thoughts, freeing the wearer to plot and move about freely!


The next exhibit is by that Canadian glamourpuss Mistress MJ: 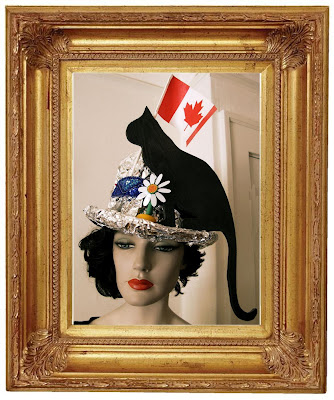 Rather than act as a repellent, Mistress MJ’s Prizewinning Tinfoil Hat has magnetic properties.

Wearing the hat is guaranteed to improve your mojo.

If you are a woman, it will lure men from across the sea (hence the symbolism of the blue band) to Canada (hence the Canadian flag symbolism) to your “flower” or “pussy” (see use of both symbols).

If you are a heterosexual man, it will attract pussy.

Really that’s all you need to know.


This towering example of aluminium high fashion was fabricated by the a queen of Denmark: CyberPetra!

Against better judgment I hereby submit my attempt at a tinfoil hat. It's been done in a bit of a rush so my concept of 70s disco didn't really come through as flattering as it should have.

It looks like the poor model is suffering from the dry, chapped skin associated with scurvy - Perhaps he'd better eat himself?
Aha! It appears that Princess is now ready for her photo-op: 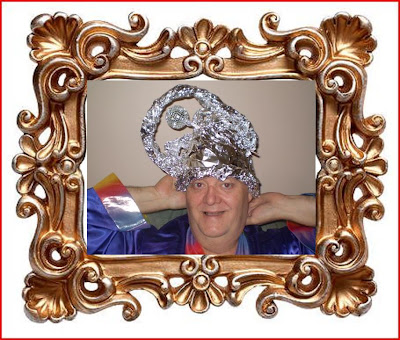 And as the Empress is starting to regain her powers, I have had to start wearing my tin hat again, just so she does not know what I am up to while surfing and blogging. She repeatedly asks "What Princess do on that funny TV all time"?.
I usually respond with "Nothing Mother just checking my Emails"
"Humph, Why you not just use Quill and Parchment like Empress Dowager? Send
Houseboy with letter!"
To which I reply "It is called technology Mother "Dial up" just stop your friends from ringing you while I am on line as they keep bumping me off" hence the upgrade and being off air for a little while:0!
I shall wish myself luck but unfortunately may not be able to vote as planned. Will let you know when I am back on air again.
End of Transmission.
Much Luv Princess


The final example of this avant garde collection has been very kindly loaned from the Salle de Bain exhibit down at the Loo Louvre, with compliments from the artist: xl 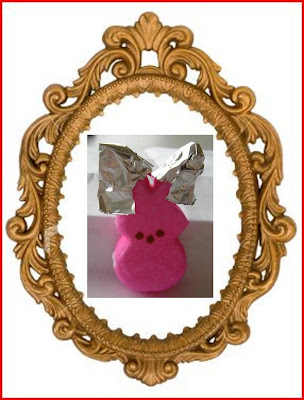 Unfortunately, xl didn't have time to attach a set of specifications, or a tale of inspiration, as he's already hard at work on his next piece, which I believe to be a rubber duck in a baking parchment sou wester!
But just look at this masterpiece - Soooooooooo cute!

Now that we have come to the end of the gallery exhibit, please show your appreciation by voting for the chapeau that you'd like to win.
I shall be tabulating your votes at the weekend and announcing the winner on Monday 29th March.
For those of you who didn't make find time *cough*BEAST,Tim,Snooze,amongstothers*cough* to create a metallic masterpiece, you may still submit your entries up until midnight on Sunday, but you'll only be eligible for an "also ran" credit. Unless, Tim, you make good your promise to "pose in my tinfoil hat wearing only a tie like one of Pete's book covers", then you'll get an extra special prize...

Oh, I'll be modelling my tin foil hat, too.


P.S. Thank you for the birthday wishes!

Posted by Inexplicable DeVice at 18:02