Prophecies of Green and Gold


I have just discovered that it has been a month since we last plopped something up on the blog.  A month!  The Ms Scarlet Approach has got out of control somewhat...
We have got so many things that we have "almost done" and "nearly finished" and "not quite got around to yet", but nothing in a state worthy of a post.  Well, not on their own-

Oh, all right!  Here are some of the many things that have kept us otherwise occupied in the last month that will likely be expanded upon into posts of their own at some point:

Between Christmas and New Year (and even afterwards) we fannied around with some new designs for a blog header.

This is the best of what we came up with, but I'm not overly enthused with it, so it will probably change later in the year.
Hey!  I quite like it.  The font, anyway.

I vaguely recall threatening another Tin Foil Hat Competition at some point reasonably recently - this time with a Ferrero Rocher flavoured theme.  With that in mind, I set to devouring a box of the Ambassador's favourites but didn't get very far: 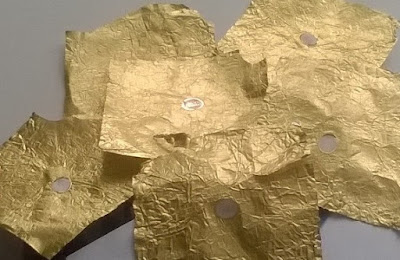 Some Star Trek stuff now.  First up, some sketches and colour trials for a Betazoid starship, specifically a royal yacht for the likes of Lwaxana Troi (or her ancestor, Lyannifaer, who featured here). 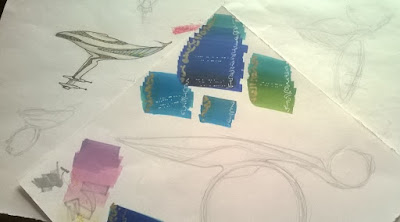 Except for the ringship Enterprise, XCV 330 (depicted in various images in Star Trek: The Motion Picture and Enterprise), the Vulcans are the only Trek race who use annular warp drive (a warp ring, or coleopteric warp drive) rather than twin nacelles, so I thought I'd balance things out in having the Betazoids use it too.  However, in spite of my first sketch (top left in ivory & gold), I've decided that the Betazoid version uses a ring that's in line with the direction of travel, rather than perpendicular to it.

And now something for Hound and Ms Scarlet - Tales from a Romulan Tarot:


The new Star Trek: Picard show (which I haven't seen yet) features a most interesting set of playing cards used (and seemingly invented by) the Romulans, called pixmit - A type of tarot, it would appear.
I have seen various clips and read various synopses and, except for Picard's Romulan housekeepers, it's only these pixmit cards that have me intrigued enough to watch the show.

Dobbin the pantomime horse appeared in my wardrobe two or three weeks ago - the work of Timothy Claypole, no doubt - and won't vacate it until I let him come with us on our next adventure over the Cusp.  Needless to say, this is what's holding up the now non-Christmas Panto.  I'm trying to get it rescheduled for Shrove Tuesday, but I have a feeling even the Spring Equinox will be pushing it...

This morning, to help me understand how slack at blogging we'd become, I had The Host create this graph showing the amount of posts we'd published each month for the past five years: 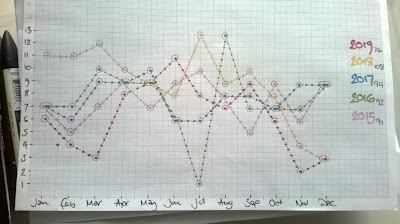 I don't know if it helps or hinders, to be honest?
Posted by Inexplicable DeVice at 15:51