It's A Faaaake! Not The Art Of Star Trek - Walk Like An Egyptian


As promised at the end of the last post, may I present: Yet Another Star Trek Art Challenge Post!

Witchface did mention that this post would entail a trip to Egypt, but that was quickly recanted. And even if it wasn't, you should know by now that I barely leave North Norfolk (bloody work forcing me to go to Norwich...) never mind leave the actual country! Besides, Broom would have forty fits if I suggested travelling overseas...

Anyway, on with the post. Here's the challenge for July - as set by the June challenge winner - which explains the Egyptianess:


The theme for this months art challenge is Egypt. I was thinking long and hard about a couple of ideas for this month's theme, but ancient Egyptians, pyramids, mummies and hieroglyphs have always fascinated me since I was a child. It's just something that inspires me and I love to dabble with. I hope you agree that it's a broad enough theme for everyone to work in.

Maybe you can show us how the Borg would build their ships if they were Egyptians. Maybe you can reimagine familiar Treknology as Egyptian “steampunk” tech. Or maybe you'll let us see how Kirk & Spock beam down to a planet with a civilization strikingly similar to ancient Egypt. The possibilities are virtually endless.


8th - 14th July
Unlike last month, I got started on this challenge straight away with a list of ideas including: incorporating the various Egyptian gods hats & headgear into a Starfleet uniform; making the various animal-headed gods into Trek races; hieroglyphs as an alien language; the Egyptian ankh or Eye of Horus as an alien logo or emblem; sandpaper pyramids (as background scenery); USS Nile - a Danube-class runabout; the Eye of Ra as a starship's saucer-section; and possibly something involving Pteppic and Ptraci from Sir Terry Pratchett's Pyramids...

16th July
Nearly a week later, I decided upon one of those ideas, which was to construct a golden Cardassian Hideki-class ship and give it an all-over livery reminiscent of Tutankhamun's mask. However, knowing that a 3D cardboard model would have taken me ages to make (not least because of all the procrastinating I'd have to fit in), I thought I'd try a flat 2D one instead and started hacking away at some gold cardboard:


Once I'd cut out the shape, I didn't like what I'd imagined it would have looked like with the mask livery slapped over it, and abandoned it in favour of the goddess Wadjet (either in full-on snake form, or a more Trek-like Selay woman) in an Egyptian-style late 24th century dress uniform (the white one). Although I wasn't sure if this would have come to pass or not...


22nd July
As well as the Selay, I thought I'd show a range of "crew" - A Caitian as Maahes, an Aurelian as Horus, a Gorn as Sobek and a Bzzit Khaht as Heqet.
I love the frog-like Bzzit Khaht even though they were barely seen on screen in ST IV. However, that love turned to frustration when I could only find a head-on view of one online so had to try and extrapolate a profile view. After several unconvincing sketches, I gave up and just drew a frog!


27th July
The final article!  This wasn't my original intention for the picture, but I was running out of time (the 28th was the deadline). 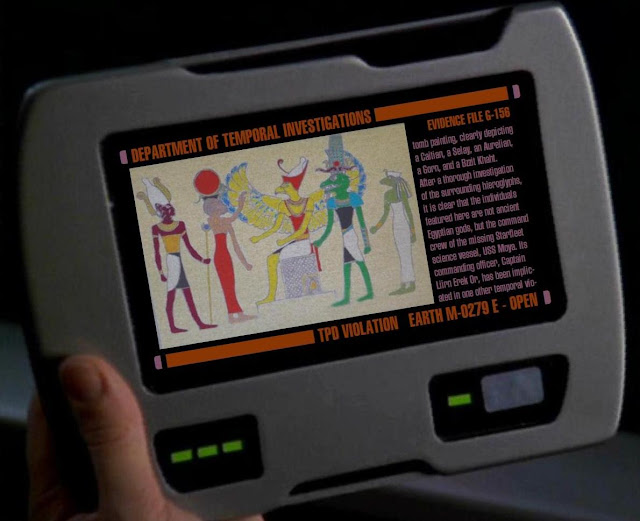 The PADD is a screenshot from Star Trek: Voyager "Dark Frontier", the Department of Temporal Investigations first featured in Star Trek: Deep Space Nine "Trials and Tribble-ations" in the persons of Dulmur and Lucsly; TPD stands for Temporal Prime Directive; and the USS Moya is a creation of my own conceit (named after Moya from Farscape), as is Captain Liirn Erek Or (aka Horus).

30th July
Bugger! I've just thought that I should have made some sort of pyramid starship out of tin foil which, afterwards, I could have adorned with a rubber duck for the 2017 Tin Foil Hat Competition in late August (closing date for your entires is 19th August, remember?!).


Posted by Inexplicable DeVice at 00:01