Remember those flying saucers? Well, I found them.

Uh, oh...
"Uh, oh..." what?!
You nincompoop! You've only gone and triggered a soap opera-style flashback.

Great. I hope we're not all caught up in this.
Well, who left an open thaumfield just lying around for anyone to blunder into?

Felicity Aston looked back over her shoulder into the main cabin as the pilots expertly directed the airship towards the looming cumulus cloud she'd picked for their experiments. Jim McQuaid was intently fiddling with his LiDAR array on the starboard side of the gondola. "Hey, Jimmy. Are you ready?" she almost shouted to get his attention.
"OK" Jim replied after making a couple of minor adjustments. He flicked the last switch as they glided gently into the cloud. 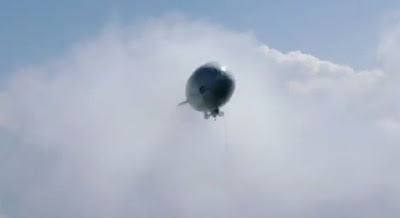 A little while later, the gleaming white airship emerged from the other side of the cloud, banking to starboard as it circumnavigated the intangible white mass.
"So, Jim, have you got an idea of how wide the cloud was?" Felicity asked.
"200 metres across."
"So, we're going to assume that its as tall as it was wide? Because it looked like a fairly solid elliptical shape. So, we'll just use a simple formula to work out the volume of the cloud."
Across the cabin, Dr Chris van Tulleken looked up from his laptop, distracted by the other scientists' continuing conversation. He gazed out of the opposite viewport at the deceptively fluffy-looking cloud as it slowly passed by, but was further distracted by an urgently flashing light on the LiDAR's display console. And then the proximity alarm went off.

A small patch of cloud off the starboard bow darkened quickly as if something solid within was heading towards the outer edge. Suddenly, the cloud burst open revealing a very damp, oddly dressed and pointy hatted man astride a broomstick heading right for them.
"Yaaaaaarrrrghh!" yelled the man hauling the broom around in an attempt to avoid the imminent collision.
"Aaaaaaaahhhh!" the scientists yelled in response as the pilots swung their airship hard to port.
Miraculously, the combination of evasive manoeuvers worked, and the collision was averted by the narrowest of margins. In fact, one could barely slide a credit card between the airship's gondola and the man's shoulder.
"Ah" the broom-riding man said through a nervous grin as the three scientists stared at him, each with a look of stunned amazement slapped across their faces. "Sorry about that. Didn't realise anyone else was up here. Heh heh."
"What the...?" Felicity started.
"Oh. How rude of me: I am Inexplicable DeVice, witch" he introduced himself, as if it should explain everything.
"Um, Felicity Aston. And this" she gestured at the airship above them, "is Cloud Lab."
"Charmed" the witch said, shaking her hand through the open window.
"These are my colleagues, Doctor Jim McQuaid and Doctor Chris van Tulleken."
"Pleased to meet you, Doctor McQuaid"  said the witch pumping the doctor's hand, before turning to the final member of the trio. "Oh!" he exclaimed and nearly fell off his broom, only saved by the lightning-fast reflexes of Doctor van Tulleken reaching out and grabbing his arm. "So handsome!"
Chris blushed and smiled surprisingly coyly before guiding the witch's hand to the viewport ledge so he could steady himself.
"How embarassing. I seem to have momentarily got away from myself." The improbably named Inexplicable DeVice, seemed to pull himself together before completing the introduction with an unnervingly intent look. "You saved my life, Doctor van Tulleken, thank you. I shall never forgive forget you."
"Well, uh... You're welcome" the strapping scientist acknowledged, his fading blush returning.

"The 'saucers!"
"What?" said the witch with a perplexed expression on his face.
"What?" the scientists asked in unison.
"What?" replied the witch.

"The 'saucers!"
"Oh, yes! The flying saucers!"
"What? Flying saucers?" Felicity asked of the seemingly babbling witch.
"Crikey, yes!" the witch answered, this time addressing Felicity rather than whatever was going on in his head. "I advise you to brace yourselves, as any moment now a couple of flying saucers are going to come hurtling past. Possibly followed by Concorde..."
"Flying saucers?" Felicity asked again, not bothering to hide the incredulity in her tone. Although, she thought to herself, we've nearly been punctured by a witch on a broomstick, so a couple of flying saucers aren't that much of a stretch.
"Yes. Flying saucers" the witch said somewhat testily. "It's a long story, but suffice it to say, their navigation arrays - well, most of the sensitive bits, really - are inoperative due to years of exposure to the British weather, so I've been guiding them back to their secret airbase in Norfolk."
Felicity's initial look of astonishment had given way to one of pragmatic resignation. "Right" she said.
"Anyway, I had a bit of a head start but then we ran into this cloudbank and I fear my delay here means that they're almost on top of us. I think you should move away from the clouds as they're not going to be able to stop quite as quickly as I was if they exit too close to you."
Felicity looked back towards the control cabin at the two experienced pilots, both of whom just nodded and began turning the airship away from the cloud and descending to a safer altitude. They've probably seen this kind of thing hundreds of times, Felicity thought, desperately clutching at straws.
The witch used this opportunity to gayze blatantly at Doctor van Tulleken. Just as Chris's blush had reached its fever pitch, the witch's head cocked to one side slightly as an unusual electronic warbling started filling the air, getting louder and louder.
"Blast! No time for flirting. They're here. Got to go!"
And with that, the witch let go of the viewport ledge and dropped out of sight below the gondola, before ascending on the other side until he was out of sight again.
Suddenly, the clouds parted again, but this time more impressively. Two very shiny 1950s style flying saucers burst out, clearly the source of the now quite strident warbling sound. Both swerved preventing the retreating airship from being sliced open, one passed below it, the other above. The scientists rushed to the portside viewports in time to see the saucers head off after the witch.
"Well. That was weird" Felicity said.
"I'll say" Chris seconded.
"I think someone likes you!"
"Oh, shut up, Jim!"


~ wobbly flashback wobbles out of existance ~

Well. That was weird!

I'll say.
Yeah, why were we referred to in the third person? Whose flashback was that?
Oh, gods. I hope we're not catching illeism.


To be prequelled in... One of our flying saucers is missing

Posted by Inexplicable DeVice at 18:33

Labels: Broom, Crush, I We Me Us, Mythtakes and Leg Ends, The Science Bit