Two Tims? It's the bloody best of times, then!
I'll say. Rawr!
Shush! We'd better let Witchface get on with it otherwise we'll be here all day.


In a sealed room in Castle DeVice, some of the Flying Monkeys had been working on the SpinTwist Portal, a new fangled but somewhat eldritch teleportation contraption. Suddenly, a wall that turned out to be massive doors split open spilling bright light into the smoky room.
A tall slender figure with a very pointy head appeared from within the light, walking forwards until it became recognisable as a witch. The witch flinched as the Killer Rabbit of Caerbannog lunged out of the smoke, tearing past and into the depths of the castle.

"Hmmm..." I said, surveying the corpses littering the room and adjusting my hat. Stooping, I nudged one of the fallen 'Monkeys with my boot. Not to my surprise, it grunted. "Are you sure you're dead?" I asked.
Silence greeted me.
"Hmm?" I prompted again.
"Of course I'm dead" hissed the corpse. Another fallen 'Monkey to the left groaned in dismay, then remembered that it was also supposed to be sans life, and stopped.
"Fine. Suit yourselves, then" I snapped, turning on my heels and heading towards the shadowy controls of the SpinTwist Portal. "He has evaded me for long enough" I muttered to myselves through gritted teeth. "And I don't care if it is his birthday."
I flailed wildly at the switches until Tim's image appeared within the targeting sensor. "Excellent!" I crowed.

With a few more deft flicks of my fingers, followed by a mechanical hum that crescendoed to a coruscating electronic warble, Tim coalesced on the platform before me, having untwisted out of thin air. He appeared to be wearing black boots, red athletic leggings and nothing else. Oh, yes!
He gazed around him, a look of wonder on his handsome face. Then he caught sight of himself in the reflective shielding around the platform just as I stepped out of the shadows towards him.
"Rawr!" he growled, flexing his muscles and grinning at his buff reflection.

"I've got you" Tim declared, catching me easily in one arm. I looked up into his cheeky yet sexy face and:

"What'd you go and give it away for, Beast?" MJ seethed after Tim had carried me out of the room.
"I told you he wouldn't care if we were alive or dead" Beast said. "I knew we wouldn't get a look in - It's always about him and that Tim. And now he's proved it."
"Oh, that didn't prove anything. This story's only just got going. Besides" she sniffed smugly, "I always get a starring role" and she rolled her eyes in derision at Beast.
Suddenly, the contraption clanked to life again. Another rabbit - this one placid and cute - materialised on the platform in the centre of the room where Tim and then the vicious Rabbit of Caerbannog had originally appeared. And a few moments later, the machine sputtered into life once more, depositing another unexpected guest.
"That was unexpected" MJ said. This time Beast rolled his eyes then leaned over and stroked the fluffy white bunny, studiously ignoring the semi-naked man who staggered off the platform and out of the room. 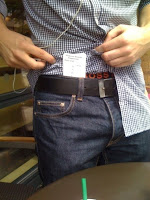 I came to with my face pressed against a rather familiar bulge. Hello! I squinted upwards, attempting to confirm my suspicion before letting the bulge's owner realise I was awake. My gaze travelled up, skimming the chiseled six-pack, ascending the impressive fuzzy chest and over the clenched jaw to - Ding, dong! - Yes, my suspicions had been confirmed. My saviour really was Tim!
My gasp of surprise gave me away. Naturally.
"Ah. You're awake" he observed, raising an eyebrow and smiling from the corner of his mouth.
"Uhhhh..." I drooled, but hastily wiped it up. "Um. Yes. Where are we?" I asked, somewhat confused at the pink and purple clouds of sunset racing by the edge of my vision and the wind whistling past my ears, and trying not to leer.
"We're on Broom in pursuit of my duplicate" Tim answered matter-of-factly.
Two Tims? I marvelled to myself at the possibilities as I hauled myself into a sitting position in front of Tim on Broom's shaft.
"Your... Your duplicate?"
"Yes" and the affirmation was filled with sexual intrigue. "It seems your SpinTwist Portal was infected with a strange magnetic type of ore - probably brought up with one of your test subjects -" Tim explained, "and malfunctioned, creating an evil duplicate of whatever was teleported next."
"An evil duplicate? But why are we after this other Tim? I mean" I continued before Tim could answer, "I know why I'd chase after him, but why would you? Unless you're trying to prevent him from getting up to no good?"
"Chuh!" he scoffed. "Haven't you seen how studly I am? I want me as much as you do!"
"Ah, so you're the evil Tim." He grinned and I marvelled to myself again just as we entered the clouds.
"Hang on a minute. Why are we chasing him on Broom?"
"Because he escaped from your castle on... Well, on another form of aerial transportation."
"But I don't have the spare Broom anymore" I wondered, trying to think of what he could have used. "And Poppins took her brolly back ages ago... Unless-"
"Yes" Tim interjected, clearly a bit miffed. "He got away on that vacuum cleaner that was gathering dust in your broom cupboard."
I rolled my eyes and berated myself for not getting rid of the damn thing at last year's vacuum amnesty at the Classic Broom Show. If only I hadn't been so lazy and actually bothered to take it, rather than lounge about in the garden slowly pickling myself in wine.
"Shit" I said.
"Oh, we're never going to find him in cloud this thick" Tim moaned. "Full stop" he ordered, and Broom came to a halt. "Z minus one thousand meters."
Broom descended gracefully through the various cloud layers. I was very impressed at Tim's piloting skills: He'd mastered Broom's little foibles easily and handled the old thing effortlessly.
We came to a gentle stop in a break in the clouds. They encircled us in bands of pink and gold, lit by the almost set sun. It would have been a lovely setting to 'get to know each other' but unfortunately, we were rudely interrupted.

From below and behind, a figure astride a vacuum cleaner rose through the clouds. It was the other Tim and he wasn't in such good control of his transportation as this one.
"Yaaaaaargh!" he yelled, crossing his arms in front of his pretty face as he careered towards us.
"Shiiiiiit!" Tim swore as he attempted to manoeuvre Broom out of the way, but was too late.
The vacuum cleaner sideswiped Broom, it's hose caught on some bristles ripping them out of their binding as we veered away.
"Oops! Sorry!" Other Tim shouted across the widening gulf. "Well, not that sorry. I heard you back at the castle and what you were planning to do with me and my muscular buttocks."
"Oh, you'd love it" Tim shouted back as he wrestled with Broom's trajectory. "You know you want to!"
"Urgh. Vom!"
"Oh, come off it. I know you. I am you! You totally would."
"I would not! Well... Maybe with you, but certainly not with IDV!"
"There's no need to be rude, dear!" I yelled back. "If it's just the fact that I'm male, I could always drop into a new body?" 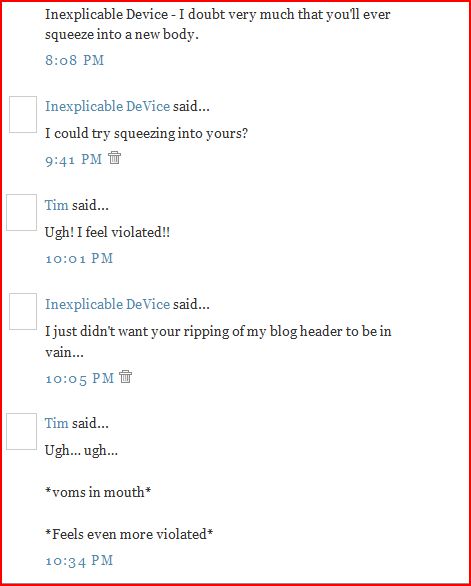 "Fine!" I huffed, but didn't have time for a full-on pout as we were rapidly losing altitude. "We're going down" I declared without resorting to raising my eyebrow to force the innuendo any further.
"I know" Tim grunted, his look of disappointment mirrored my own as we realised that sex wasn't going to be forthcoming. "Can't you do anything?"
"Well, I haven't got Wand, so there's no way to discharge thaumic energy into Broom to keep us airborne" I almost wailed. "Wait! There is a way! But-"
"I know. I just hoped we'd have more time together."
"Noooooooooooo!" I cried as Tim gripped my Broom's shaft firmly then shoved his other hand right up my the bristles. He was attempting to realign the bristles - A dangerous job when at rest, but pretty much fatal while in flight.
"Remember..." I whispered to him as I touched his face in a certain way.
He looked at me, his eyes alight with thaumic energies as his body dissolved in a magical fire that was absorbed into the bristles. Broom surged with power and broke out of the headlong plummet. Before he had fully dissipated, Tim spoke:
"It is a far, far better thing that I do, than I have ever done; it is a far, far better rest that I go to than I have ever known."

Continued in Cusp Trek III: The Search For Sanity...

"Well!" MJ sniffed. "Was that all I got?"
Beast had nearly bitten his own fist off in an attempt to stifle his laughter.
"Hmmph!" she huffed and stormed out.

Posted by Inexplicable DeVice at 00:01