It's A Faaaake! Not The Art of Star Trek - Driven To Distraction


As we haven't had a Star Trek-related post for a little while - what with all the Norfolk photos and all - I thought I'd treat you to an extra long one!
Don't worry, you can describe your pleasure and thank the Host profusely in the comments, as usual.

Sigh...
Yes, after a three month absence here on this blog (two months at Trek BBS), may I present the May Art Challenge (as set by the winner of the March/April challenge):


My idea is to choose anything from any Star Trek movie or series after the original and redesign it as if it had happened in the original series (TOS).

Think of how George Lucas handled the Star Wars movies and series- Doug Chiang was told not to reimagine or reinvent the work of Ralph McQuarrie from the original movies, but extrapolate from them. That's what we want to do here. Try to imagine all the latter Treks as if they were going on at the same time as TOS or immediately after. You might want to use as inspiration this creative collection of photo manipulations placing the TOS ship in later Treks.

For the May Art Challenge of TOSifying (with thanks to an adult male Borg of my acquaintance for the descriptive term) a later Trek design to a TOS style, I eventually decided to take on the flight suits as worn by Tom, Banana B'Elanna, and Harry in the Star Trek: Voyager episode "Drive". I originally mentioned doing the flight suits as a joke, but with the month nearly half gone at the time, I knew that if I didn't commit to something, I'd just let it go until next month (when I'd probably not do anything either).

So, first up, my inspiration (screenshots from TrekCore), followed by the progression of my design (as with many things in life, remember that clicking enables embiggenment):


14th May
Inspiration struck after spending the evening ga(y)zing at Jeffrey Hunter as Captain Pike in "The Cage" (he's so dreamy) - specifically, his excursion jacket. The jacket has a wide panel running down its centre which matches the grey panel of the Voyager flight suits, plus it has pockets (a rarity in Starfleet uniforms) which seem eminently practical in such a garment. The colours will be based on those of TOS - a gold centre panel with darker edging (and, possibly, silver-white piping as a nod to the bands around the sleeves of the TOS excursion jacket and the white shoulder yoke of the Voyager flight suits), with a navy blue/grey or dark grey/black main body (Memory Alpha states the jacket to be grey, but my colourblind eyes see blue).

So, my TOS flight suit will look something like this, I hope (please ignore the toast crumbs - I was eating breakfast when I took the photo. Oh, and ignore the waste extraction bit - that was my justification for having primary coloured tubes running over it à la TOS environmental suit, but I've given them the heave-ho now.): 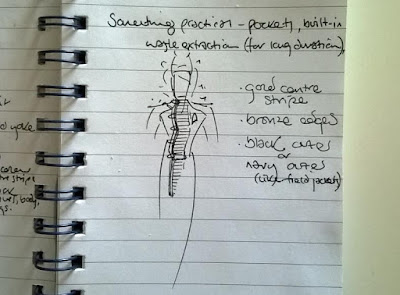 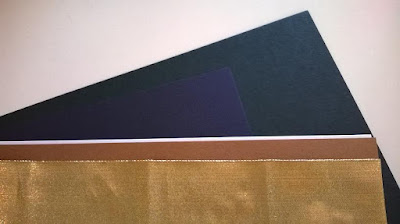 18th May
After a great deal of dithering over whether to have a rethink due to the similarities to the Discovery uniforms (the first trailer for Star Trek: Discovery was released online 17th May), laziness kicked in and I decided to keep to my original design - Discovery comparisons be damned! 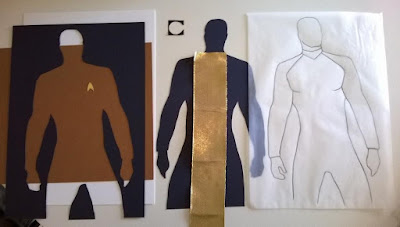 21st May
After some experimentation, I eventually lost the copper collar, belt & piping (doesn't it look like a crutch when not in position?) and settled on the basic look - middle left and bottom right. 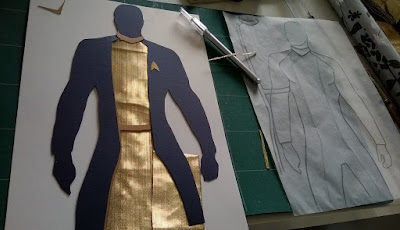 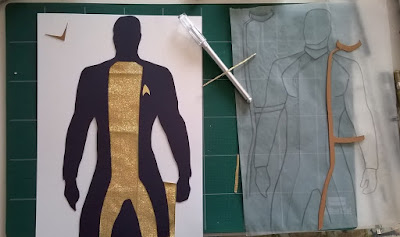 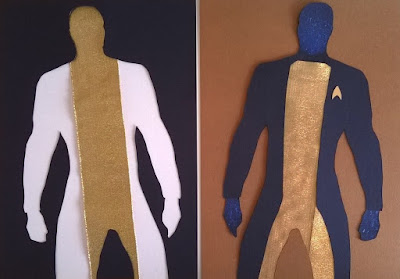 25th May
I've been tinkering with this TOSified flight suit on and off for the last few days, but everything I do seems to take it further away from what little TOS style there already is. So, I've decided to stop, and stick with what I've got so far:


26th May
FInally decided to go with the middle design as my entry to the challenge:


We'll let Senator Vreenak have the last word, shall we?

If you're interested/curious,  my previous Trek Art Challenges can be found here:

Posted by Inexplicable DeVice at 13:12