Hello! We hope you all had a lovely Yuletide, Christmas, Winterval, whatever?

I'm just squeezing in a final "books read this year" post - one without a chair in sight, although, as you can see by the photo, it does have a Christmas theme even though none of the books are Christmas-related.
I'm a little off the target of 60 books this year (to beat last year's 59), but it's quality not quantity that counts, right? 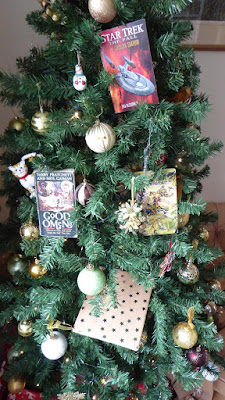 The excavation showed the fossilized plesiosaur had been holding a placard which read. 'End Nuclear Testing Now'.
That was nothing unusual.
But then came a discovery which did intrigue Kin Arad.
A flat earth was something new...

The U.S.S. Enterprise has been sent to Cardassia Prime, where Captain Jean-Luc Picard is involved in discussions over the removal of the small number of remaining Starfleet forces left over from the end of the Dominion War. Also present is the Cardassian Ambassador to the Federation, Elim Garak. All parties involved are keen to see Starfleet leave Cardassian soil, not only because the Cardassians are now allies of the Federation, but because Starfleet has been badly overstretched in recent years and the resources are needed elsewhere. With so much goodwill at the highest levels, this meeting should be a formality. However, within a few days of the arrival of the Enterprise, a Bajoran Federation officer is found murdered. The crime may be racially motivated: an ultra-nationalist organization called "Cardassia First" has been stirring up anti-Federation feeling across Cardassia over the past year, and a Bajoran is an obvious target…

“Armageddon only happens once, you know. They don’t let you go around again until you get it right.”

According to the Nice and Accurate Prophecies of Agnes Nutter, Witch – the world’s only totally reliable guide to the future, written in 1655, before she exploded – the world will end on a Saturday. Next Saturday, in fact. Just after tea…

People have been predicting the end of the world almost from its very beginning, so it’s only natural to be sceptical when a new date is set for Judgement Day. This time though, the armies of Good and Evil really do appear to be massing. The four Bikers of the Apocalypse are hitting the road. But both the angels and demons – well, one fast-living demon and a somewhat fussy angel – would quite like the Rapture not to happen.
And someone seems to have misplaced the Antichrist…

I wrapped up Bertie the Balloon at the Farm for Babyzilla before I took the photo up there, hence the no-show. Still, you can see plenty of Bertie-related stuff on his Facebook page.

And that's it for books this year.
We'll see you in a couple of days or so for our end of the year review (aka The Coven Awards)!*
If we've finished it, that is...

Posted by Inexplicable DeVice at 10:03