As I'm sure you all know, the solstice occurs when the North Pole is tilted the furthest away from the sun (23.5 degrees). This means the Northern Hemisphere experiences its shortest day, while the Southern Hemisphere basks in its longest day.
However, don't go thinking that the solstice is always on the 21st December. Due to the wobbly old Earth and our not solar-accurate clocks, the solstice can occur as early as the 20th and as late as the 23rd December (although occurrences on those dates are rare - it's more usual on the 21st and 22nd).

Anyway, the point of this post isn't to harp on about the Winter Solstice. No, it's Star Trek-related!

I think I can hear people groaning...
Another social media website I frequent (no, not that one - this one is specifically for Star Trek) holds monthly art challenges (you can see my entry for October here), and November's was this:


Your challenge is to make a Trek "Christmas Card". It can be for any of the holidays celebrated at this time of the year, from Thanksgiving to New Years. It can be an in-universe made up holiday or not. A fairly standard card size is 7x10 unfolded, 7x5 folded.
Get out the glue and glitter and your handy pencils, or crack open Photoshop and shop them photos.

So, out came the glue and glitter (and scalpel) for this Vulcan Winter Solstice card: 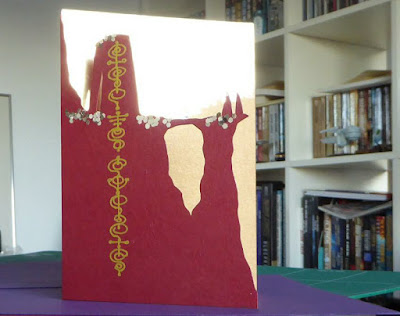 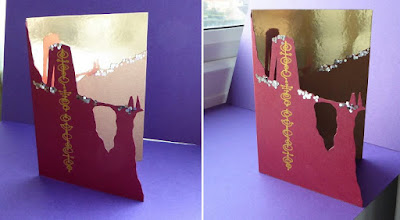 I wanted to do something non-Christmassy and with Vulcan calligraphy (having come across Korsaya.org), and as Memory Alpha suggests that Vulcans have Paganism in their history, this winter solstice card inspired by the end scenes in Star Trek III sprang forth.
The calligraphy says "Winter Solstiss". Or it's supposed to - Apologies to Korsaya and any Vulcans whom I have offended.
Also, apologies to Ms Scarlet for the shocking attempt at calligraphy. Albeit Vulcan calligraphy.
And after sitting on my shelf for a couple of weeks or so, I sent this card to a certain (ex?) blogger of my acquaintance, who I thought would appreciate its Star Trek-ness.

We hope you have a splendid solstice, one and all!

P.S. I won the November Art Challenge with this card, so I had the honour of setting the December challenge!

Posted by Inexplicable DeVice at 10:00

Labels: Blogorati, Canvas, Holidays, I We Me Us, Star Trek, The Science Bit