I carry the seed of Chatogaster*


Well. Here we are again with another books-read-in-the-last-few-weeks post.
I'll warn you now: you might find something a little... odd with this post. I hope it doesn't leave you feeling uncomfortable and wrong...

Who left this whip here? And what's that laying on the rug?! 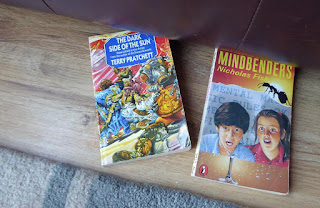 'Heads down, eyes glare, Mindbenders! Glass Move!' she commanded. She kept her eyes on the ants.

Mindbending starts off as just a game for Vinny and Toby... until the ants arrive, that is. At first the formicarium - a gift from bossy Aunt Craven - seems just a typically useless present. What kind of fun could you have with a portable ants' nest? But as time passes, the children find themselves uncontrollably drawn to stare and stare into the glass case and to concentrate on its manic occupants - it is like plugging your mind into a huge power socket. Suddenly Vinny and Toby are doing wonderful, magical things that should have been impossible: mindbending is incredible!
But then the ants decide to grow...

Along with Trillions and Grinny, this book rounds out my Nicholas Fisk collection. I really must read more of his books.

Just a minute... Those books aren't on chairs! What gives? Where are they?

Books under chairs and other seating conveniences 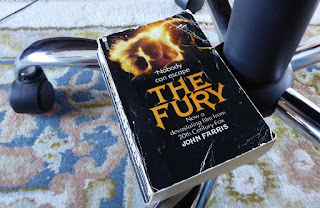 Robin and Gillian are 14 years old. They were born with the power to speak without words - and kill without contact...
They are The Fury

I can't remember how I came about this book, but I've had it for years, and read it several times now. I think this either inspired my interest in Anne McCaffrey's Talents books, or was inspired by them? 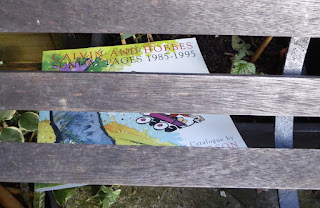 On 18th November, it was the 31st anniversary of the first publication of Bill Watterson's Calvin and Hobbes cartoon (thanks for the reminder, Mago).
This exhibition catalogue collects Sunday strips from each of the ten years that Calvin and Hobbes ran for. These strips are those that Mr Watterson felt showed it at its best, and he's commented on quite a few of them which gives a nice background to his process of work and train of thought at the time.

Dom Sabalos had a lot of advantages.
As heir to a huge fortune, he had an excellent robot servant (with Man-Friday subcircuitry), a planet (the First Sirian Bank) as godfather, a security chief who even ran checks on himself, and on Dom's home world even death was not always fatal.
Why, then, in an age when prediction was a science, was his future in doubt?

A wonderful, marvellous, and amazing book! And it still feels fresh and original after all this time.
Last read back in 2015 here. Although it felt like much longer ago than that. 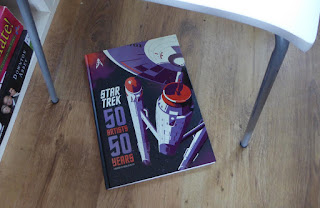 To coincide with the 50th anniversary of the original Star Trek TV series, CBS Consumer Products have commissioned a series of art pieces to celebrate moments, characters, storylines and episodes from the franchise. Artists from around the world as well as famous fans have contributed lovingly made posters, photos, sculptures, comic strips, textiles and much more to commemorate this beloved show. Foreword by Nicholas Meyer.

You can see the art in this online exhibition. There are so many stylish and amusing takes on Star Trek, but my favourite is Star Trek Inception: The Cage, by Paul Shipper (mainly due to the presence of Captain Christopher Pike, as played by the devastatingly handsome Jeffrey Hunter).

So that's it from the books lurking under chairs. I hope it didn't disturb you too much!

Labels: Books, I We Me Us, Mago, Star Trek