Calvin is a pig-faced smelly fat-head*


I'm not usually one to jump on a bandwagon-

Except for when you are!
Oh, shush.
Anyway. Bandwagons and not jumping. Except that this particular bandwagon was travelling at a sedate enough pace to leap on without sustaining injury, and because the driver (Pilot? Controller? Just what is the title of someone in charge of a bandwagon, runaway or otherwise?) happens to be a blogger I admire.
I'm also hoping that this bandwagon works as well for me as it did (and still does) for Ms Scarlet, as the photos I took were with Phone (as I couldn't be bothered to faff around with Camera) and aren't that good because of poor light levels.
Oh, The Very Mistress MJ also sat astride the bandwagon, but didn't quite get the point.
So. We'd better get on with the show. May I present:


Books on chairs and other seating conveniences 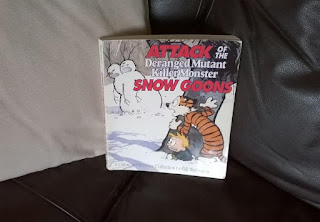 Snow Goons is seen here reclining on the soon-to-be-rid-of sofa, and I last read it here, and featured it here. 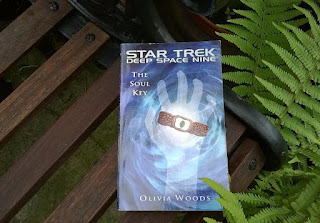 I haven't the time, fonts, nor wherewithall to do with the title what I did with Snow Goons title up there, so it's back to normal service now.
The Soul Key fancied a breath of fresh air, so decided to relax on the garden bench.
It is the continuation of the DS9 re-read I'm making my way though, and follows on from Fearful Symmetry. It's a shame Olivia Woods didn't write any more DS9 novels as I rather liked this one.
The Soul Key last featured here (in a small cameo). 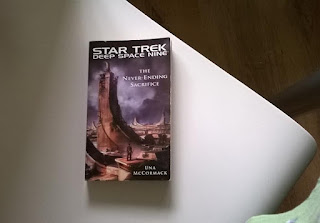 Continuing the DS9 saga is The Never-Ending Sacrifice, a wonderful novel (and one of my favourites of any subject or genre) about the life of an orphaned Cardassian boy, Proka Rugal, who is taken from his adoptive Bajoran family and repatriated to Cardassia against his will. The story covers Rugal's time during the trials of Cardassia - under the watchful eye of the Obsidian Order, Dukat's rise to Power, the disastrous alliance with the Dominion, and the decimation of his race's homeworld. I know it sounds rather grim, but Rugal does have a happy ending.
The Never-Ending Sacrifice is seen here on one of Castlette DeVice's dining chairs. 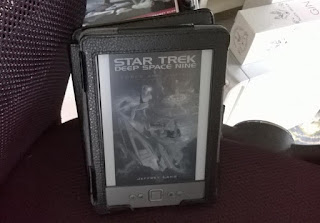 Published just a few days ago, and new to my Kindle, is the latest DS9 novel, here sat up on my desk chair.
Force and Motion tells of a calamitous day-in-the-life of Chief O'Brien and Nog when they go to visit the Chief's former commanding officer, the disgraced Starfleet Captain Benjamin Maxwell.
In between The Never-Ending Sacrifice and this novel, there are ten other DS9 books, so I'm about two thirds of the way through my re-read at the moment. 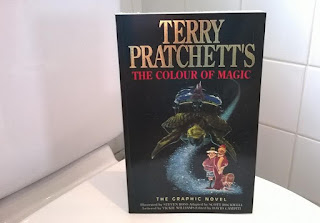 Um... I ran out of chairs, hence the setting upon the porcelain throne!
Posted by Inexplicable DeVice at 10:14