Not The 2016 Infomaniac Book Challenge II

Because we were banned from the Cusp library!
For an incident involving a 4H pencil, a small frog, and a gesture that could be classed as obscene in certain cultures!
That gesture was taken wildly out of context!
Yes, but you meant it though, didn't you!
Only a little bit...
Anyway. Enough of that. As I was saying, there are no books from over the Cusp this time. Instead, may we present a book meme that first graced our hallowed blog nearly ten years ago.
We've updated the answers (all from The Host), but you can see the original here, if you're curious.
Right. On with the show:

1. One book you have read more than once: Get Off the Unicorn, by Anne McCaffrey. I last read this anthology back in October 2014, and was going to give it another flick through (probably only my favourite stories, though), until another oft read book caught my eye on the shelf next to me: The Ship Who Sang (also by Anne McCaffrey).
In fact, all the books in this post that I've actually read (with the exception of the one that I wish hadn't been written), I've read more than once!


2. One book you would want on a desert island: Oh, gods. I really don't know? Something amusing, I think. Maybe one of Bill Watterson's Calvin and Hobbes collections, or Good Omens, by Neil Gaiman and Terry Pratchett? 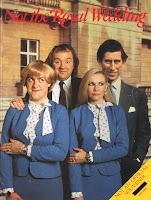 3. One book that made you laugh: Not the Royal Wedding, edited by Sean Hardie and John Lloyd. I last read this book just over a year ago and, as always, it had me shaking with laughter.
It also provided inspiration for various blog posts, not least those regarding Dame Barbara Cartland's many hats (and a wedding hat of my own), and the titles of many others beginning with "Not..."

• Not the Hats of Barbara Cartland II
• Not the Emperor's New Clothes
• Of not-Concorde, The Core, and Contractors

4. One book that made you cry: The Long Way To A Small, Angry Planet, by Becky Chambers. Specifically, the bit near the end in which -

- Lovey, the ship's A.I., is severely injured and, as a last resort to save her, the tech engineer Jenks, who loves her, resets her (basically, switches her off and on again) but only her original factory-settings program, Lovelace, is restored. Devastated, Jenks breaks down and flees the ship.


5. One book you wish you had written: Aside from The Time Traveller's Wife (see the original meme), and The Long Way To A Small, Angry Planet (here and here), I wish I'd written one of the many books floating about in my head. I've got a couple of potential Star Trek novels knocking around up there, plus an original sci-fi novel in the vein of TLWTASAP, and a semi-autobiographical historical fantasy.


6. One book you wish had never been written: I'm not going to mention the book or the name of the author because they don't deserve the publicity, in my opinion. But, to give you a clue, the book's title describes a number of monochromatic tones, and the subject matter revolves around the author some vacant strumpet lusting over a character almost played by Charlie Hunnam in the film adaptation (poor Jamie Dornan, though). If it wasn't for this book, the world wouldn't have been subjected to the horrible sequels and that dreadful film.
Full disclosure: I haven't read the whole book, but I've read enough of Inexcuseable's copy to recognise the appalling writing which ruins the lurid sex fantasies. Pah!

7. One book you are currently reading: As part of my Star Trek: Deep Space Nine "relaunch" re-read, I'm reading Fearful Symmetry, by Olivia Woods.
Actually, I've just finished it and I'm about to start Dayton Ward's Elusive Salvation which arrived on my Kindle on Tuesday. In fact, by the time this is posted, I may have already started it.


8. One book you have been meaning to read: The Extraordinary Journey of the Fakir Who Got Trapped in an Ikea Wardrobe, by Romain Puertolas. As recommended by The Very Mistress MJ herself!

9. One Book That Changed Your Life: So many books have made an impact, whether large or small, on my life, but I'm going to go with There Must Be Fifty Ways To Tell Your Mother, by Lynn Sutcliffe, as I reread it recently. This book of Coming Out stories (that first featured here) helped me deal with how friends and family dealt with my Coming Out twenty-odd years ago.

• The Very Mistress MJ (because she started it!)
• Ms Scarlet (to give her something else to do)
• Tim (if he can find the time)
• Norma (because that SPRING! photo has simply got to go from my sidebar), and
• Mistress Maddie (as an act of reciprocation)

Posted by Inexplicable DeVice at 07:49

Labels: Blogorati, Books, Canvas, I We Me Us, Meme, Star Trek