Desperate for some good publicity after the "Marmalised Marmalades" BBC swearing scandal in 1988, diabolical deviant, Delilah Smythe, approached equally desperate (and weak-willed) Royal, Prince Edward, with a "fool-proof" idea: an It's A Royal Knockout rip-off substituting the mid-ranking royals with celebrity chefs.  She'd even roped in Jane Asher, the Swedish Chef and Martha Stewart as team leaders.

However, at a royal charity dinner, the Queen, in no uncertain terms, put the kybosh on Edward's involvement, and without Edward, Delilah's idea was doomed.  As fate would have it, while on her way to pilfer some cutlery during the dinner, Delilah just happened to overhear something she shouldn't when she stooped to pick up a discarded Rocher wrapper near to a hushed conversation between Michele Ferrero, philanthropist and owner of Ferrero SpA, and Dame Christopher Biggins, Official Pantomime Dame of Great Britain and the Commonwealth realms. 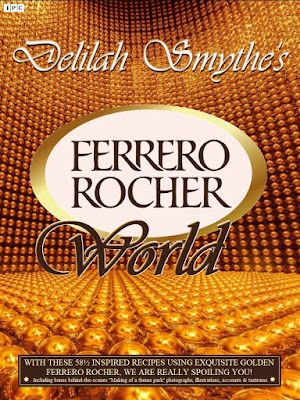 Eighteen months later, coinciding with the release of her latest book - and to the surprise of almost everyone - Delilah Smythe's Ferrero Rocher World grotto and theme park opened near to the equally surprised (and horrified) village of Mogwash, in England.
Designed by Delilah, and reluctantly financed entirely by the secretive Ferrero SpA company that manufactures the distinctive Rocher chocolates, Delilah Smythe's Ferrero Rocher World made headlines the world over.
Delilah's ghoulish tendencies had kicked in just before the opening of her Ferrero Rocher World when she sensed the death knell of the Austin Rover Group.  Delilah swooped in like a vulture, snapping up a spare-parts mountain of Austin Ambassador body shells and chassis for a steal and having them reconstructed and refurbished to whisk VIPs around the theme park on an exclusive, pre-proletariat, pre-opening, preview opening.  Pre.

The VIPs - mainly European ambassadors, a few minor royals, and a selection of celebrities whose noses Delilah wanted to rub in her golden foil enrobed success - had been very, very slowly flown in from Northrepps International Aerodrome in one of the last remaining "Elizabethan class" Airspeed Ambassador airliners.  An Austin Ambassador could have got them there more quickly - well, less slowly, let's say - by road!

Despite a massive opening weekend and surprisingly positive reviews, visitor numbers soon dropped off.  It seemed that people didn't want to expend precious time and calories gallivanting around a dizzying golden kaleidoscopic underground maze of highly polished, foil-covered chocolates, Nutella swamps, and hazelnut liqueur lakes.  What they really wanted was a massive box of Ferrero Rocher that they could scoff on their own while lounging in front of the telly clad in large, shapeless t-shirts and worn-out jogging bottoms or leggings.

Although the park was a flop, sales of Ferrero Rocher soared.  With Delilah's ill-advised deal to take the majority of the park's profits (while Ferrero SpA "only" generated income from associated merchandise - i.e. Ferrero Rocher) coming apart at the seams, and bankruptcy imminent, she was saved at the last moment when, quite by accident, it was discovered by a pair of Japanese tourists that the Rocher grotto could actually function as a remarkably accurate neutrino detector.
Delilah brokered a deal with the Japanese who, almost a year to the day from when the park first opened, dismantled the whole thing and shipped it to the Gifu Prefecture in Japan, where it was reassembled near to the existing Kamioka Observatory.

And - unbelievably - Delilah only bloody well received an honourary doctorate from the University of Tokyo!

The Lump-Blobbles started to appear within a few months of the opening of the relocated observatory.  After a few half-hearted attempts to trap them or drive them out failed, the Lump-Blobbles were left to their own devices - mainly because they didn't appear to be doing any harm, but also because they were cute and a draw for the curious which created extra revenue.  What they are and where they came from is somewhat of a mystery, though.  Most of the staff think they are just extremely obese rats or squirrels which have lost their hair due to malnutrition caused by gorging themselves exclusively on Ferrero Rocher.  A minority suspect they are mountain or cave yōkai similarly afflicted by Rocher gorging.
Fatty-Lardy-Lump-Blobbles*, or just Lump-Blobbles, are small, fat, rotund creatures which cause glee in small, fat, Japanese children, who chase them throughout the park and poke them to hear them laugh.  However, what sounds like laughter to humans may actually be cries of pain and anguish according to a spokesperson from Greenpeace (who later "fell" down a Rocher Resonator shaft, never to be seen again).

To this day, the Delilah Smythe Rocher Neutrino Detector (DeSRoND) - affectionately known as "Norma" by its scientists and staff - is still in use as a scientific neutrino observatory-cum-theme park.
And, other than the initial lump sum, Delilah is scarcely getting a penny from it!  The short-sighted cow misplaced a decimal point and mistook yen ¥ for pounds £, and so receives just about enough each year to buy a 350g Ferrero Rocher cone - not even a pyramid! - every Christmas.  Ha!

[Aside from the Rocher wrapper, some of Delilah's book, and the Austin Ambassador, all other images come from
the Kamioka Observatory, Institute for Cosmic Ray Research, University of Tokyo]
Posted by Inexplicable DeVice at 20:56